The Echinopsis huascha H.Friedrich & G.D.Rowley (1974) is native to north-western Argentina (states of Catamarca and La Rioja), where it grows in semi-arid, rocky and sandy areas, characterized by dry warm climate with both daily and seasonal remarkably wide temperature range, and poor rainfalls concentrated in the summer season.

The name of the genus is the combination of the Greek words “echinos” = hedgehog and “opsis” = appearance, with obvious signification; the name of the species is that of a location of north-western Argentina.

Plant with a fairly rapid growth, it has cylindrical stems ramifying only at the base, up to about 1 m of length and 5 to 8 cm of diameter, erect at the centre and descendent on the sides, with 12-18 ribs, rounded and little prominent of a usually pale green colour. The areoles, distanced of about 1 cm, are yellowish and equipped with 9-11 radial, needle-shaped thorns, long up to 3 cm, of a yellowish or pale brown colour, and 1-3 central thorns, slightly more robust than the radial ones, long from 2 to 6 cm and of the same colour.

The flowers generate from the areoles close to the apex, open during the day for about three days, are from funnel to bell-shaped, 7-10 cm long and 6-7 cm broad, usually red, but orange and yellow colours are not uncommon; ovary and floral tube are covered by scale and a thick down.

The fruits are globose, yellowish or reddish, with a diameter up to 3 cm. It easily reproduces by cutting, to be well dried up for some weeks, and by seed, in which case the colour of the flowers may differ to that of the mother plant.

Plant of great ornamental and landscape value due to its decorative thorns and the huge, magnificent, flowers, ideal complement, in areas characterized by mild and dry winters, of “desert” gardens, even if of small size, being one of the smallest columnar cacti. 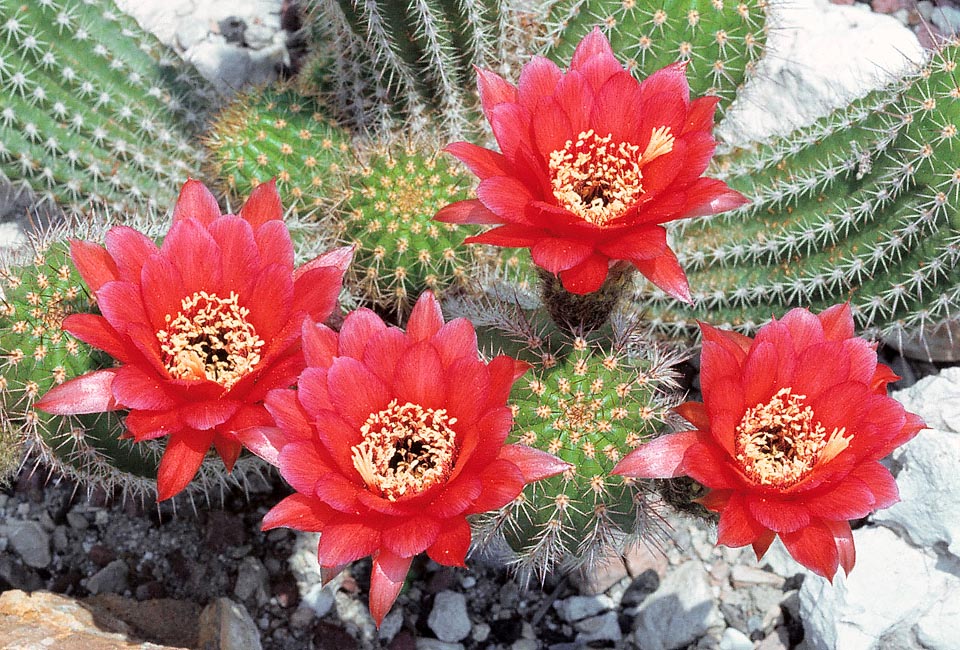 Big ornamental valued species, Echinopsis huascha is native to north-western Argentina. Cylindrical stems, ramified only at the base, 1 m long with 5-8 cm of diameter. The flaming day flowers, with 6-7 cm of diameter, last about 3 days. In the horticultural hybrids they may reach even 15 cm with various colours © Giuseppe Mazza

It is to be cultivated in full sun, or however at the maximum possible luminosity, on particularly draining soils, which may be formed for about the 50% by the common fertilized garden earth and for the remaining part, in equal quantity, by sand (agri perlite) and crushed stone. It seems to bear, in dry soil and for short period, temperatures as low as about -10° C, but it is better not to expose it to temperatures lower than 0° C, especially in presence of humidity, where the climate does not allow its cultivation in open air, it is to be cultivated in pot with the same aforementioned modalities. In summer, during the vegetative period, it is to be regularly watered, but leaving the soil to dry up completely before irrigating again; in winter, it is to be kept dry at temperatures ranging from 3 to 5 °C, this cool and dry period helps in the blooming.

The plant is, since years, is subject of hybridization and of variety selection which has produced plants with flowers much bigger than the species, with a diameter of even more than 15 cm, and with various colours. For its facility of cultivation and the showy flowers, it is particularly suitable for those who begin to passion for the cultivation of the cacti, whilst, due to its robustness, is often utilized as rootstock.

The plant is inscribed into the appendix II of the CITES (plant whose trade is ruled at international level.

Echinopsis huascha was last modified: May 7th, 2018 by Giuseppe Mazza