The Echis are a group of extremely dangerous viperids, present in Asia, practically from the Sri Lanka Island, through India, Pakistan and Middle East up to part of Africa, where they are represented by the following species:

Egyptian saw-scaled viper (Echis pyramidum) , present in Egypt, Libya, Algeria, Sudan, Ethiopia and Somalia, but also in Kenya, and in particular along the Tana River.

Ocellated carpet viper (Echis ocellatus), at home in western Africa (Senegal, Gambia), and in the countries of the Gulf of Guinea, limited to the northern part, far away from the coastline and the pluvial forest (I found one specimen in the Central-African Republic).

On the contrary, for what is Asia concerned, the master is the Saw-scaled viper (Echis carinatus – Schneider, 1801). In fact, it is present in Sri Lanka (former Ceylon), India, Bangladesh, Pakistan (including some islands), Tajikistan, Uzbekistan, Turk- menistan, Iran and Afghanistan. Furthermore, it is also found in the Arabian Peninsula (United Arab Emirates and Oman).

The saw-scaled viper is a viperid of modest size (from 40 to 80 cm, rarely exceeding the 60 cm), but, unlikely other small vipers, considered little dangerous, due to the modest quantities of venom they may inoculate, and also due to the modest strength of the venoms, is absolutely not to be underestimated, as, we shall see, it stands amongst the serpents responsible of the highest number of serious or mortal poisonings. More slender than the other vipers, it has the head well distinct form the neck (which appears thin), with the apex of the muzzle blunt and rounded, whereby, if seen from above, it recalls the silhouette of a pear, eye of medium size, at least proportionally to the mass of the reptilian, placed somewhat ahead, protruding and with vertical pupil.

The head is covered by small scales, so much that the periorbital scales are often disposed in 2 or 3 concentric rows. The body, though robust, appears less stocky than that of many other vipers and is covered by strongly keeled scales (saw-scaled) placed at half-body length, in 25 to 38 oblique rows. The saw-scaled viper, as indeed all Echis, has a characteristic way for warning a potential troublemaker: when it is upset or scared, it begins a series of hypnotic movements which seem to merge in a sort of a perpetual motion, forming an endless series of C’s, with the spires rubbing together, generating a sound resembling to a hoarse and threatening rather sinister, sibyl. Unfortunately, however, this warning is not the rule, and often the bite is not preceded by any premonitory sign. The sub-caudal scales are not divided and there is only one anal scale.

The background colour is usually the grey, more or less dark (going from the sand to the graphite grey colour), but are not rare individuals of brick colour, rust, or green-grey, on which stand out pale transversal dots edged of dark. Moreover, on the sides we see a pale or white line zigzag shaped, describing a series of arcuate scallops. On the contrary, on the head stands out a spot in the shape of a cross or of a trident, white or cream, whilst the ventral part may be whitish or salmon.

The habitat is very various, from sandy and rocky grounds to shrubby zones, more or less thick, to dry prairies, from the sea level up to the 1.500 m of altitude. It does not love the humid zones and often is found under stones or fallen trunks, therefore the activities of the collection of firewood is particularly at risk, but, on the other hand, it does not frequent the desert itself. The only truly desert species is, in fact, only the Burton’s carpet viper or Painted saw-scaled viper (Echis coloratus).

The Echis carinatus is a terrestrial reptilian, but capable to climb low shrubs, especially when the ground is wet, as it happens after a shower. It moves quicker than many other vipers, and has mainly crepuscular and nocturnal habits. During the day, it loves to shelter into some hole or underground den, under a rock, in a crevice or in the hollow of a dead trunk or simply under a thick shrub, for getting out by the sunset or a little later. 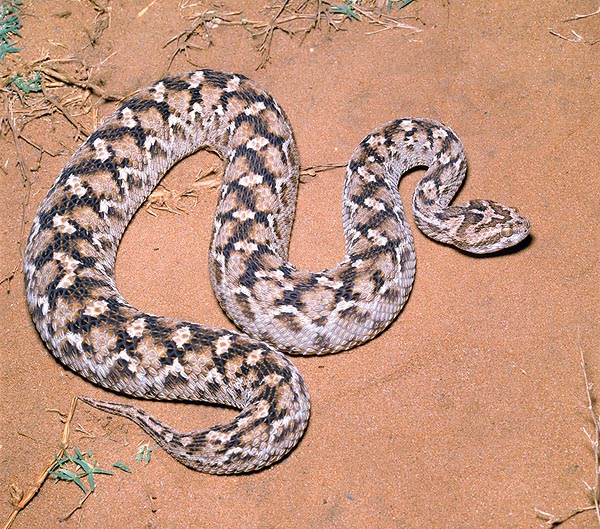 Common in most of Asia, even if of modest size, the Echis carinatus is a big killer © Giuseppe Mazza

Some doubts concerning the reproductive systems of some Echis, as a rule oviparous, with 4 to 20 eggs, have not yet been completely clarified. It has been reported, in fact, that some populations of Indian Echis should be ovoviviparous.

The alimentation includes mainly rodents, but also lizards, skinks, and nestlers of birds laying eggs on the ground or which have fallen from the nest. The particular predilection for the mice often leads these serpents to frequent villages, farms and to enter even the dwellings, much more easily when the same are simple huts. This explains the high rate of bites. The habit of the poor and rural populations to walk barefoot, in the vicinity of the settlements, also during night time, renders this incident even more probable, and in fact in soma areas the mortality rate reaches high percentages. To this we have to add the work in the fields, done by hand, the collection of firewood, which leads to place the hands also where the eye cannot go, and we shall get as a result a number of bites much greater than that of a cobra or a bungarus.

Children are particularly at risk, due to the high probability of getting in touch with the scaled vipers during their outdoor games, as well as due to their grater vulnerability to even low dosages of venom. Another occasion of incident if the sleep itself. Often, the beds are placed directly on the floor, and it is not rare that a person, while sleeping, turns and touches or crushes a serpent while this one is hunting mice.

For what its behaviour towards the humans is concerned, as said before, the scale viper, when disturbed, often reacts with an incredible wrath: apart the sound emitted rubbing the spires, it may swell the body like a Bitis arietans, and emit loud hisses, and then shoot and bite with an even excessive enthusiasm. I remember a specimen I met in eastern Africa which, attempting to bite, was effecting jumps ahead of the same length of its body.

In India, the Spectacled cobra (Naja naja), the Russell’s viper (Vipera russelli), the Common krait (Bungarus coeruleus) and the Scaled viper (Echis carinatus), the four serpents responsible of most of the fatalities (between the 20.000 and the 25.000 per year), form the quartet called “The Big Four”, similarly to the famous African ‘Big Five”, that is the elephant, lion, buffalo, leopard and hippos, which are the most dangerous animals of Africa, even if then, in reality, the hippo and the crocodile are more dangerous than the others.

However, of all these fatalities, about the 80% can be attributed to the Echis carinatus which detain in this way the dubious record of the greatest killers of the Asian continent. The fangs, proportionally long if compared to the size, inoculate quite deeply a much active and strong venom, provided of cytotoxic and haemotoxic activity. The cytotoxins cause early tumefaction, due to cutaneous oedema (extravasation of liquid through the wall of the capillaries), string pain and necrosis at times, but it’s the haemotoxic action, more tardive (12 hours as an average), to be the most dangerous.

The quantities of venom inoculated with a bite are not too high (as an average, from 10 to 20 mg, even if inoculations of 75 mg have occurred), but the average fatal dosage for an adult human is of only 5 mg, so, apart the not rare cases of dry-bite, when the venom is not injected, a full-bite dosage is easily fatal.

The average mortality is of the 20% (cases not treated with serum), quite similar to that of other species (for instance, Bitis arietans). Such percentage, which may seem low, is due to the fact that, like all venomous serpents, the scaled viper may decide, from time to time, if and how much venom is to be inoculated, and, being bites for defensive purposes and not predatory, the reptilian does not always contract the muscles of the venom glands.

The action on the coagulation provokes, at the beginning, bleeding in the bite position, often with formation of vesicles containing blood, petechiae and ecchymoses on the skin and on the mucosae, then bleeding from the gums (gingival hemorrhage), from the nasal mucosa (epistaxis), from the digestive tract with haematemesis (blood vomiting) and melaena (digested blood in the faeces, which assume the colour of coffee-grounds). At times, a cerebral haemorrhage precipitates the situation and these are the cases where the demise is faster.

In addition to these actions, at times we get an acute, often fatal, renal failure. There is a specific serum for treating the bites of Echis carinatus having a serious symptomatology, but this serum is ineffective against the bite of the African Echis especially those of western Africa, which proves that, inside the same genus, different species may have different venoms. And not only: at times they have seen differences of the action mechanism also inside the same species, in different geographic areas.