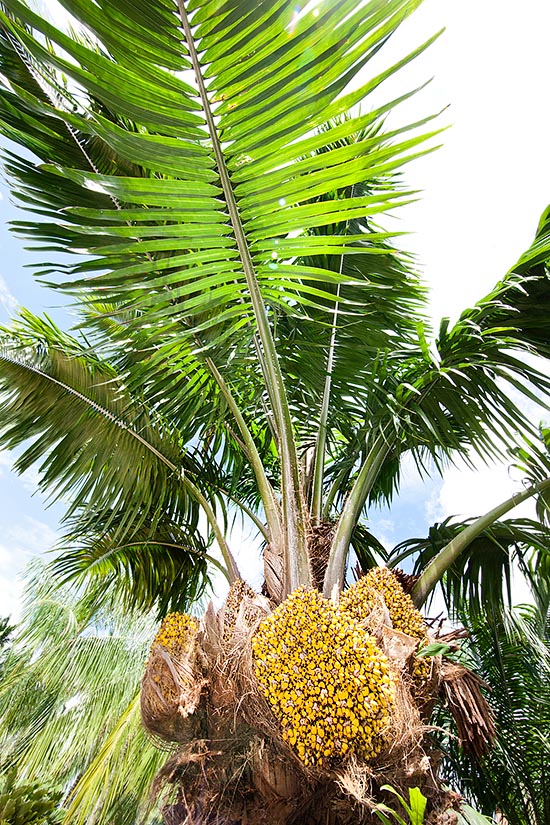 The species is native to Central and tropical South America (Brazil, Colombia, Costa Rica, Ecuador, French Guyana, Honduras, Nicaragua, Panama, Peru and Surinam), where it grows in open areas at low altitudes, preferably on sandy soils along the banks of the rivers or in swampy zones.

The name of the genus comes from the Greek “élaion” = oil; the name of the species is the combination of the Latin terms “olea” = olive and “fero” = to carry, with obvious reference.

The Elaeis oleifera (Kunth) Cortés (1897) is a slow-growing monoecious species, with single stem, procumbent or erect, 1 to 6 m long, and with 30-50 cm of diameter, rooting in the part in contact with the soil, thickly covered in the youngest part by the residuals of the foliar petioles and peduncles of the inflorescences.

Dark green pinnate leaves slightly curved and turned towards the apex, 2-4 m long, on a 1-2 m long petiole with the margins equipped with short and thick spines, with regularly distributed pinnules, 60-120 cm long and 4-8 cm broad, pointed, initially rigid, then hanging towards the apex, lying almost on a plane. Usually unisexual inflorescences among the leaves, but on the same plant, often produced alternately, the female ones 30-40 cm long on an about 40 cm long peduncle, compact, ramified, the male ones, up to about 60 cm long and carrying white flowers.

The infructescences are compact, ample and roundish at the centre and tending to conical at the apex, quite typical, ovoid or rhomboid fruits, 2-3 cm long, of intense orange red colour when ripe, containing 1-3 seeds, weighing 3-10 g, with fibrous and oily mesocarp, thick 2-4 mm which forms the 30-40% of the whole fruit; often are present parthenocarpic seedless fruits, formed, for about the 90%, by the mesocarp. It reproduces by seed, which germinates in 3-6 months; the fructification begins by the fourth-fifth year of age.

Species cultivable only in the tropical and humid subtropical zones, as it does not stand temperatures close to 0 °C, characterized by high rainfall distributed along the whole year, in full sun, it grows also in semi-shaded position, but with poor production of fruits; not particular about the soil, even if poor, with preference to the slightly acidic sandy ones, it bears water stagnations.

Rarely cultivated palm for commercial purposes because not very productive, if compared to the Elaeis guineensis, even if the oil obtained is considered as of better quality. The fruits are utilized in the natural distribution area for getting cooking oil, for doing soaps, as food for the pigs and for getting a drink with addition of water and sugar; the oil gotten from the endosperm is utilized for the hair. The fruit contains from the 30 to the 50% of oil, formed by the 56-67% of oleic acid, 14-24% of palmitic acid, 6-22% of linoleic acid, 0,6-2% of stearic acid and 0,1-0,3% of myristic acid, fairly similar in the composition to the olive oil.

An increasing interest in the hybrids with the Elaeis guineensis does exist, in the attempt to bestow to this one a greater resistance to the diseases of the oleifera, the slowness of growth and the lower bearing which facilitates the gathering, and the high contents in unsaturated fatty acids in the fruits.