Encephalatos hildebrandtii is a cycad of big size, growing mainly in Kenya, Tanzania, northern Mozambique and Uganda. We can find it from the sea level up to 600 m of altitude, but also in the hinterland, 80 km far from the coast. In Uganda it is reported from the rivers banks up to an altitude of 1200 m.

The genus Encephalartos, name given by the German botanist Johann Georg Christian Lehmann in 1834, comes from the Greek terms “ἐγκέϕαλος” (encéphalos) = brain and “ἄρτος” (artos) = bread, to indicate the compound of aminoacids located in the stem, once source of food for the local populations.

The specific term hildebrandtii was assigned in honour to Johann Hildebrandt, German botanist explorer of Eastern Africa. A first report concerning this cycad is however merit of John Kirk, British consul in Zanzibar (1866-1886). Kirk was a passionate naturalist and had a constant correspondence with the Royal Botanical Gardens of Kew. In a latter dated March 20th, 1868, He was announcing the discovery of a new species of Encephalartos on the coast, close to Dar es Salaam (Tanzania). 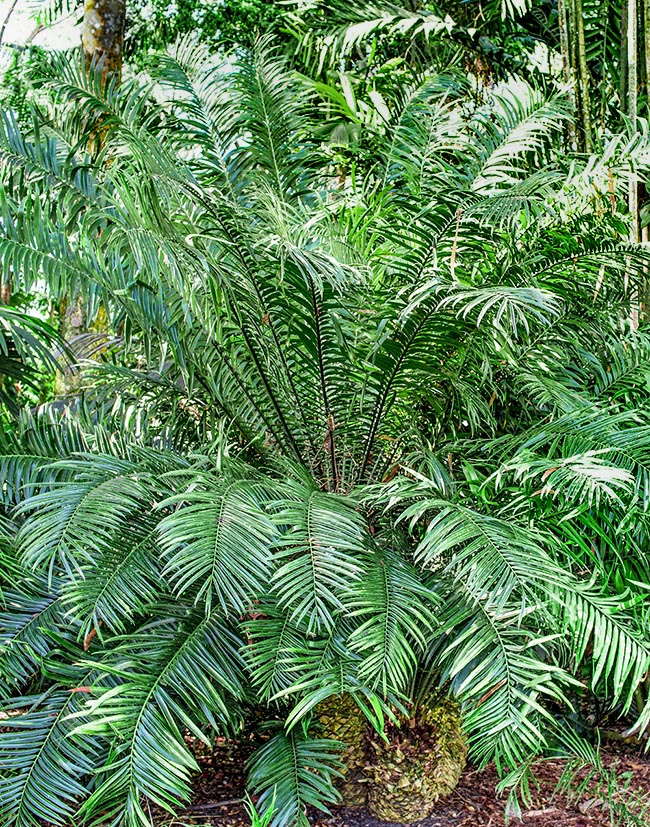 In East Africa the Encephalartos hildebrandtii can be even 6 m tall, with a 30 cm broad stem and 3 m leaves © Giuseppe Mazza

During the following 2 years, Kirk sent several specimens of this cycad to Kew, but the poor conditions they had when they reached Kew did not allow the description of the new species.

It was the German voyager and collector Johann Maria Hildebrandt who, a few years later, found again this cycad still unnamed and sent to Berlin specimens, that were described by Alexander Carl Heinrich Braun and by the curator of the Botanical Gardens of Berlin, Carl David Bouché.

In 1874 the new species was nominated as Encephalatos hildebrandtii, that initially united a series of populations distributed in different regions.

In the relationship with the habitat is odd the observation that the Kirk’s red colabus of Zanzibar (Piliocolobus kirkii) nourishes greedily now and then of the leaves of Encephalartos hildebrandtii, inspite of their high toxicity. This primate appears to be one of the very few mammals able to take advantage from the leaves as source as food.

In the past, in presence of  heavy and serious famines, the Encephalartos hildebrandtii was consumed by the local populations as an extreme food. Nowadays, the central marrow of the stem as well as the endosperm of the seeds, are still used for cooking a traditional form of starchy bread consumed by the local tribes in the north of Kenya should be related a the high incidence of liver cancer.

Some authors remark that the natives respect very much these cycads, as they ascribe them magical powers, such to be able to protect their villages from the epidemies. This is possibly the reason why many Encephalartos hildebrandtii can be found, in splendid isolation, at the margins or the middle of cultivated fields. Occasionally they appear also together with old baobabs (Adansonia digitata), with which they share the site.

Encephalartos hildebrandtii is characterized by an arborescent posture, that, in some cases, may aver spectacular under the ornamental profile. The stem at times grows ramified and can exceed the 6 m of height, with a diametre of about 30 cm, surmounted by a crown of leaves up to 3 m long. 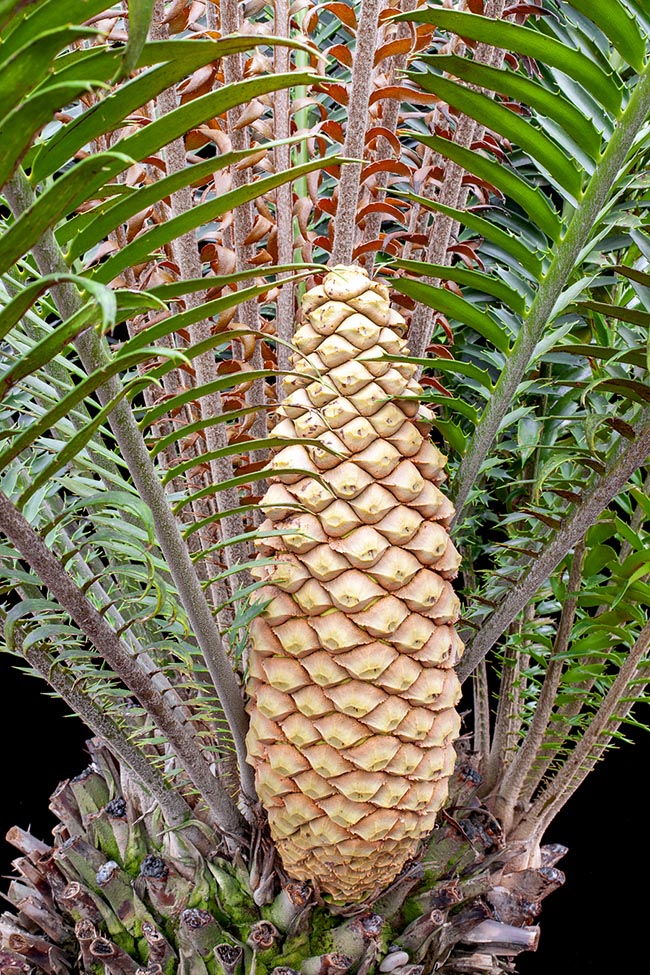 The new leaves, when emerging, have a colour varying from orange to olive green, to then assume a dark green and lucid  colouration when ripe. Petiole and subcylindrical rachis, wholly white-grey during the juvenile phase.

The leaflets, united in 50-70 pairs, are rigid, dark green above, paler under; linear-laceolate form, slightly falcate, 15-35 cm long and 20-25 mm broad, acuminate apex, prickly with 2-3 spines to assume a bifurcate or trifurcate look and margin with 1-4 diverging spines, on both sides.

The leaflets reduce progressively their size while proceeding to the base of the rachis and finally assume a spiny look.

The female cones, borne by a 4-6 cm long peduncle, may vary from one to four. They have a subcylindrical look, 28-60 cm long with a diametre of 15-25 cm. They are opaque yellow with apex rounded or sharply tapered and rounded base.

Deflected, median sporophylls rhomboidal, 20-30 cm tall and 35-50 mm broad. The sarcotesta, the external fleshy part of the tegument of the seed, is initially of yellow colour, turning vermilion red when ripe.

One to seven male cones, cylindrical or fusiform, 20-50 cm long, of 5-9 cm of diametre, of yellow-greenish colour. 5-25 cm long peduncles. The sporophylls, towards tihe median part of the cone, are rather deflected, from rhomboidal compressed to subtriangular, 9-17 mm tall, 19_28 mm broad, glabrous.

Encephalartos hildebrandtii is well present in the botanical gardens and in the private collections.

Although this cycad grows at the sea level and almost on the Equator, it shows an astonishing cold tolerance, surviving well in the Mediterranean climate, easy to cultivate, requires a well draining substratum of cultivation and a well exposed position. It badly bears the placement in grassy turfed and served by automated irrigating systems gardens.

Encephalartos hildebrandtii, like all African cycads, is menaced by the destruction of the habitat, but the oramental value of the species has favoured a remarkable multiplication in nursery also thanks to the good germination of the seeds. The species is considered as at risk of extinction and is inserted in the Appendix I of the Conventoon on International Trade of Endangered Species (CITES).