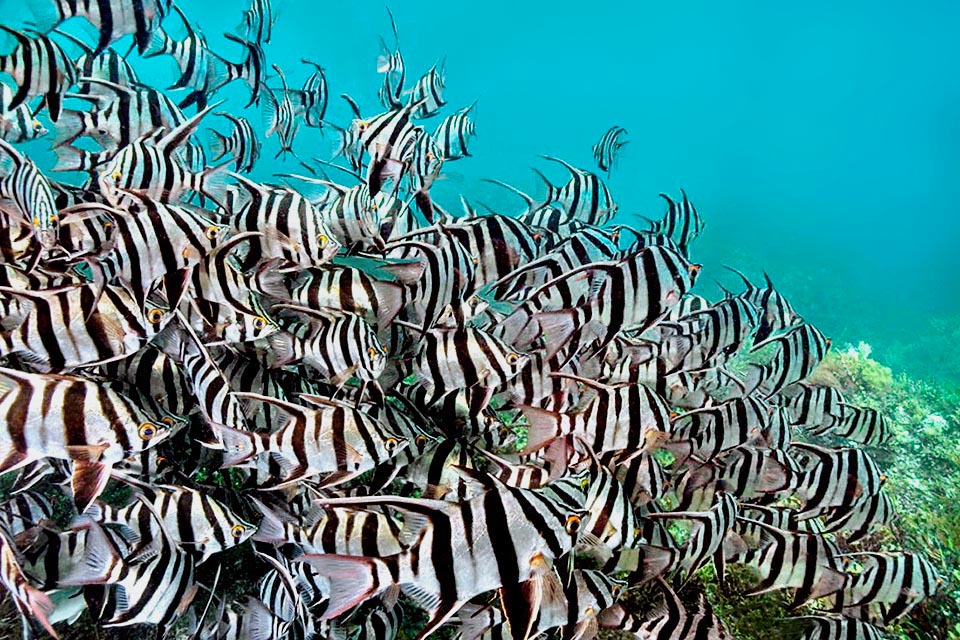 Enoplosus armatus (White, 1790) belongs to the class of the Actinopterygii, the ray-finned fishes, to the order of the Perciformes, and to the family of Enoplosidae, created for this fish, with only this species and some fossils.

At the beginning, due to the flat body and the rather long snout, it had been assigned to the Chaetodontidae, the family of the butterfly fishes, under the name of Chaetodon armatus White, 1790, genus changed after a few years by Lacépède in Enoplosus armatus, to put in evidence its difference.

In 1836, after the finding in the famous Lagerstätte of Monte Bolca, in Italy, of a practically identical fossil, about 50 million years old, and christened Enoplosus pygopterus, it has been decided to create for these fishes a family apart, rightly, that of the Enoplosidae.

The name of the genus Enoplosus comes from the Greek  “ένοπλος” (enoplos) = armed, with reference to the long spines of the fish.

The specific epithet armatus, armed in Latin, reaffirms this not a negligible defensive weapon it has. 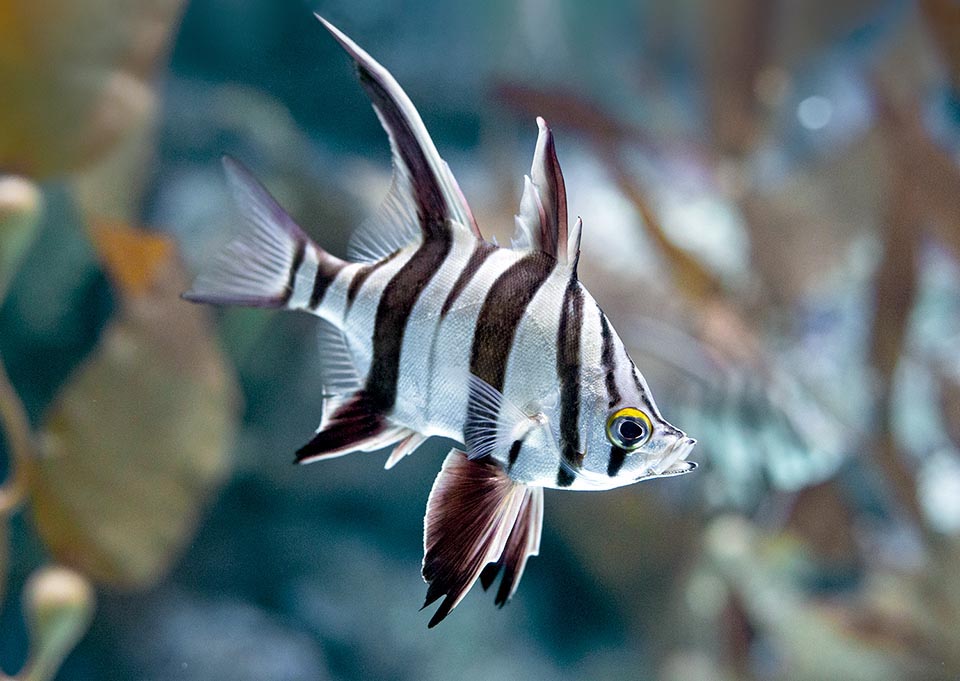 Often the young grow in schools in the estuaries, whilst adults often go swimming in open sea, descending up to 90 m of depth © Giuseppe Mazza

Enoplosus armatus is endemic to Australia. We find it along the coasts of West Australia, but North, in south Australia, and in the eastern side of the continent from Melbourne to Brisbane.

It is a species accepting the brackish waters, frequenting various habitats depending on the age. The young grow mainly in schools in the estuaries, whilst the adults, solitary at times or in couple tend to move towards the open sea, going down up to 90 m of depth along the rocks and the outer side of the reefs. Often, they can be found also in the submarine prairies.

Enoplosus armatus can reach 50 cm in length. The body is flat with concave front and elongated snout. The eyes are great, to ensure a good vision even in deep waters, and observing it in profile, with those vertical black lines it has, crossing parallel the body and the fins, it may give the strange impression of two fishes partly overlapping. 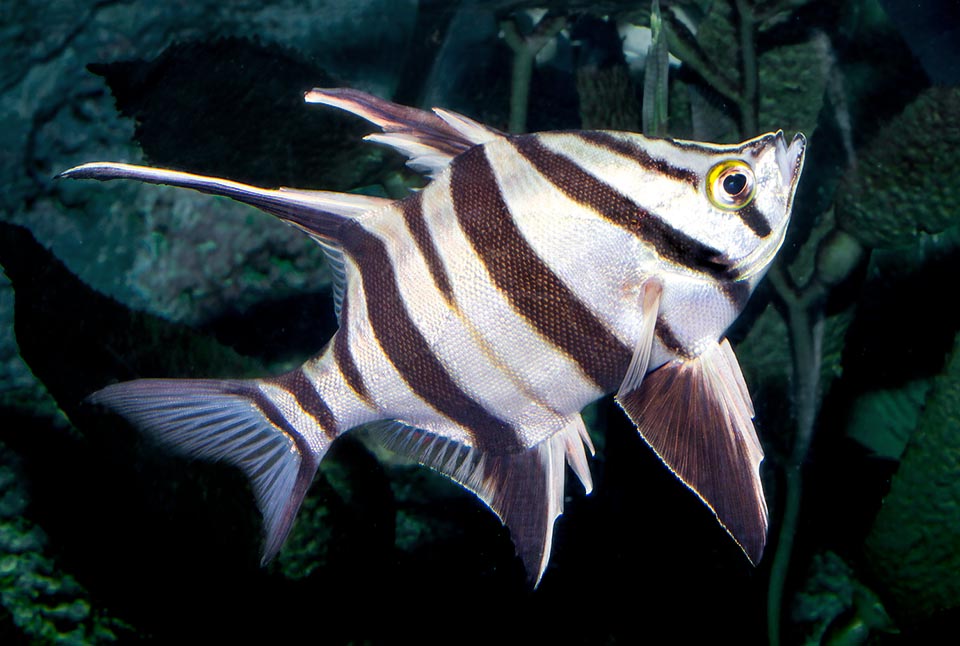 In profile, with its double fins, we might think almost of a fish doubled at the centre. Can be 50 cm long nourishing of worms and of crustaceans © Giuseppe Mazza

As a matter of fact, there are two showy dorsal fins, with relevant ventral ones, starting, one after the other, from two slight bumps of the profile. Both are armed with long spiny rays, totalling 9 plus 14-15 soft, and the second, the biggest, has a falciform appearance. It is a diffused conviction that these spines are poisonous even if no glands or venomous furrows are visible, but they may cause, anyway, very painful wounds.

The livery is silvery, with black or dark brown vertical belts. The first one masks the eye, as often is the case of the Butterfly fishes, and the last continues on the upper and lower edge of the caudal fins. Then, there is another one, crossing vertically the snout, that continues on the chin and on the back. A zebra camouflage design, in short, visible also on the cited fossil that from the Eocene has protected the species with avident success. 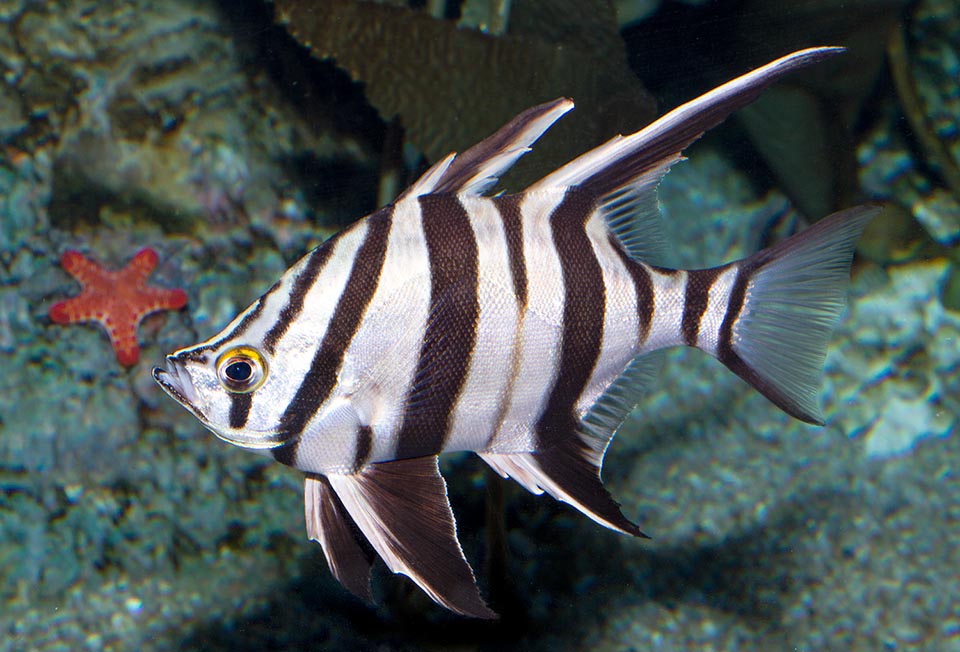 It has long spines that cause very painful wounds. When stressed, it grinds the teeth with a sound that surprises the intruders and has earned it the name of Old wife © Giuseppe Mazza

When stressed, this fish emits an unusual sound by grinding its teeth, a screeching noise, that surprises the intruders and that earned it the English vulgar name, not too respectful towards the ladies, but assumed by various languages, of “Old Wife”, Others, because of the split design, call it “Double Scalare”, referring the aquarium popular fish having white and black vertical stripes.

Enoplosus armatus is a carnivorous fish initially nourishing of zooplankton and then, later, mainly of worms and benthic crustaceans. For reproducing, the couples leave the school. The eggs are floating and are entrusted to the currents.

Little is known about the resilience of the species, but the vulnerability index is nowadays (2020), moderate, marking 41 on a scale of 100.