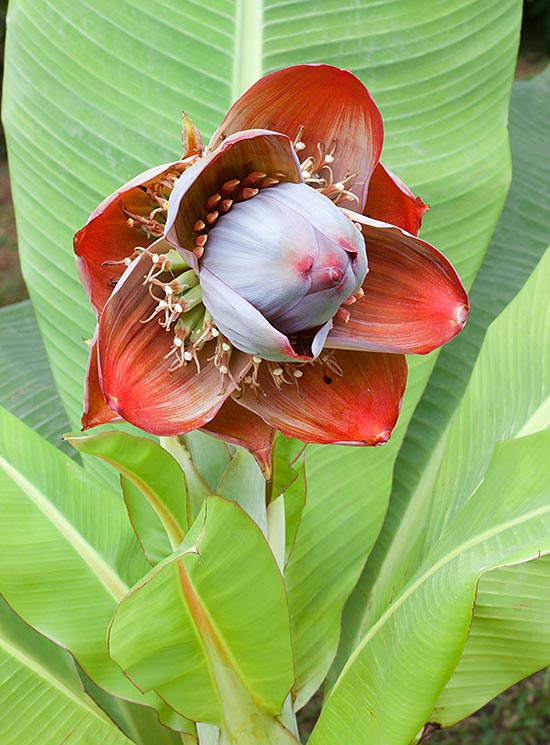 Appreciated due to the big leaves and the about 50 cm broad splendid inflorescence, Ensete superbum is poorly known and quite rare in cultivation. Seeds have medicinal virtues © Mazza

The species is native to Assam, Myanmar, northern Thailand and north-western India, where it grows in the deciduous and semi-deciduous forests in the valleys and along the rocky hill slopes.

The name of the genus is the local (Abyssinia) one referred to the Ensete ventricosum; the name of the species is the Latin adjective “superbus, a, um” = superb, magnificent, with obvious reference.

The Ensete superbum (Roxb.) Cheesman (1948) is an erect monocarpic rhizomatous herbaceous species with single stem, 3-3,5 m tall, with pseudo stem formed by the persistent foliar bases strictly wrapping one over the other, almost conical, 0,9-1,2 m tall with a diameter of about 70 cm at the base and 30 cm at the apex under the leaves. The leaves, on a deeply grooved petiole, are simple, entire, oblong-lanceolate, 1,5-3 m long and 50-90 cm broad, of bright green colour. The inflorescence is a curved terminal spike on a robust peduncle, 0,5-1 m long, with groups of 10-15 flowers arranged on two series along the floral axis, each one covered by thick ovate bracts, about 25 cm long and 20 cm broad, opening in succession, persistent, of reddish brown colour. At the base of the inflorescence are present female flowers, followed by the male ones in the terminal part. The fruits are oblong berries with almost triangular section, about 7 cm long and of 3,5 cm of diameter, containing subglobose blackish brown seeds rather angulate due to the mutual pressure, of 0,8-1,2 cm of diameter.

In the humid warm regions it is evergreen with three years life cycle, in the monsoonal ones the aerial part dies during the dry season and grows again during the rain season, with a four years cycle.

It reproduces by seed, previously kept in water for two days, in sandy loam maintained humid at the temperature of 26-28 °C with variable germination times starting from about one month, and by micropropagation. It can be propagate vegetatively by cutting at the base the pseudo stem of a plant who is on the way of blooming and emptying the rhizome at the centre and filling it with topsoil, in this way we may get some plants that can be detached, not simple operation and, of course, at the expense of the mother plant.

Fairly rare species with magnificent foliage, cultivable in the humid tropical and subtropical zones, its cultivation may be tried in the warm temperate ones where temperatures of some degree lower than 0 °C are short lasting exceptions. Can be utilized isolated or in group in parks and gardens in full sun or slight shade and sheltered from the winds which would harm the large leaves; it is not particular about the soil, even poor, provided draining, constantly maintained humid during the vegetative period. It can be cultivated in capacious containers, in organic loam with addition of sand or agri-perlite per 30%, for the decoration of greenhouses and particularly luminous winter gardens, with winter lowest preferably not under the 10 °C; the waterings must be regular and abundant in summer, more spaced in winter allowing the substratum to dry up almost completely.

The species has also a special religious meaning in the Buddhist culture and is planted close to the monasteries.

Since long time the ground seeds are used in the traditional medicine for various pathologies; laboratory studies have evidenced in the extracts the presence of bioactive substances such as alkaloids, phenols, flavonoids, saponins, etc. and anti-inflammatory activity which requires further studies.