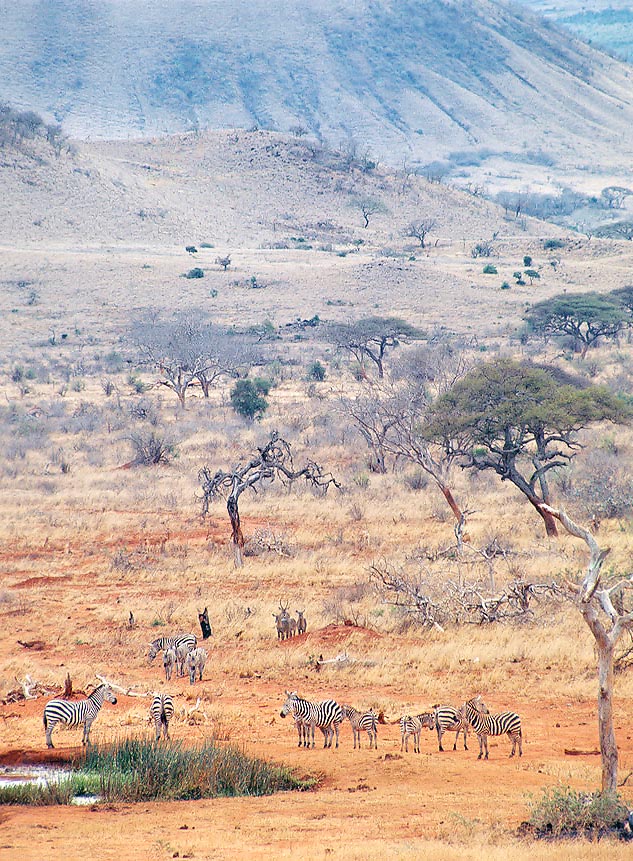 The Burchell’s zebra, also known as Plains’ zebra (Equus quagga Boddaert, 1785), is the African wild equid (Equidae) with the greatest geographic diffusion, being present from part of Somalia, from southern Sudan and from the Maasailand up to South Africa and Angola.

It is represented by several subspecies, of which the northernmost one (Equus quagga boehmi) has more marked and “purer” black stripes, whilst, moving southwards (Equus quagga burchelli and Equus quagga antiquorum), the typical white and black striation tends to become less neat, with appearance of brown, or anyway more faded, striae called “shadows” which show up on the white between a black stripe and the following one, conferring the animal a less “candid” look, almost as if the background hue had a light buff colour.

Usually, the striation differs from that of the mountain zebra and the Hartmann’s (see text Equus zebra) due to the absence of reticle on the back, where are evident, on the contrary, wide striae, and from that of the Grévy’s zebra which shows much thinner and thicker striae.

Another distinguishing physical charac- teristic is the absence of the “ruff”, typical of the mountain zebras.

The striation, different for each specimen, is an individual mark of recognition similar to the fingerprints, and is useful in the mutual recognition between adults or also for the foal for locating the mother among the other females.

Also in the observation made by the man, the stripes may be a useful characteristic for tracing a certain animal, whilst some differences are able to make us distinguish, from far away, a male from a female, which is not a very easy thing, seen the almost inexistent sexual dimorphism. 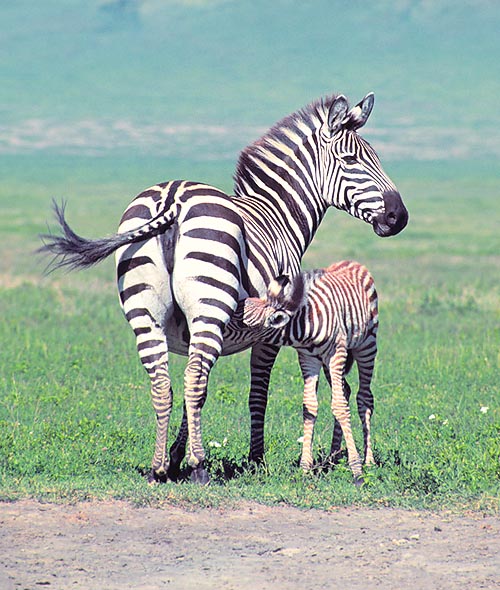 Somebody might also think to the striation as a form of mimetism, similarly to what happens for the tiger, but I do not think that this applies also for the zebra.

Primarily, the “striped” mimicry is effective for breaking the outlines when an animal is in the thickness of the high grass or of the bush, whilst these equids love the open and at times semi-arid zones, furthermore, this mimetism is efficacious when associated with a silent behaviour, and this by sure is not the case of the zebras, talkative and noisy animals.

In addition to this, most predators have a vision in black and white, colours that during the night stand out significantly, as show the contrasts of “warning and deterrent” of nocturnal animals equipped with chemical weapons of other defence systems (ratels, skunks, porcupines, etc. rely on black and white for communicating: “Look at me, I am so much visible because I have a weapon you may not even imagine!”).

Actually the zebras love to graze in open zones where they may survey the approaching of a predator, thanks to much developed senses, excellent eyesight, effective smell and excellent hearing, and in case of danger they rely on a fast escape or on the strength of the hind limbs, capable to project a hoof with the strength of a cannonball.

Another characteristic of the zebra is the evident mane on the dorsal part of the neck reaching the head forming, ahead, a …punk tuft: the mane is one of the elements good for evaluating the state of health or of stress of the animal and, for understanding it, it is necessary to consider the digestive system of the zebras. The zebra is not a ruminant, whereby it does not have those four chambers which allow the storing of big quantities of vegetables in short time (read: reduced exposure to predation), a later mastication and finally the absorption of the nutrients and of the liquids, but has, on the other hand, another adaptation of organ, called hindgut, that is, a particularly developed part of the digestive tract, which includes the most caudal extremity of the bowel, where the digestion takes place by means of fermentative phenomena helped by an appropriate bacterial flora. The decomposition of the cellulose will be by sure less effective than in the ruminants, but, on the other hand, the digestion is more rapid and, as a direct consequence, great quantities of gas generate in the digestive tract. This has two odd consequences. 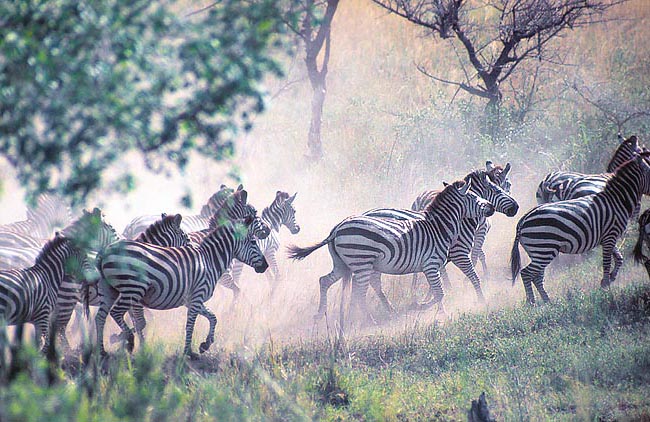 Years ago, while I was following a lion with two tracers, a sudden roar made me take up hastily my rifle, with the heart in over-speed, whilst the tracers flew to the sides, but, in reality, it was not a lion charging us, but the …wind of a zebra which, surprised by our silent arrival, had run away emitting that thunderous fart.

Indeed, the zebras emit huge and frequent emissions of gas, caused by the imposing fermentative processes, symptom not of a bad digestion but a normal assimilating process.

The second consequence is the fact that also a sick zebra may look fat and healthy as a horse, but this is simply due to the tympanites, present also if the animal is underfed.

In such a case, the mane will give us precious indications: a healthy animal will show a proudly erect mane, whilst a mane bent on the side will tell us that that head is possibly sick or under strong stress.

The zebra is a grazer, that is to say, it loves grazing the grass of the prairies and of the grassy savannah, with a certain preference to the low small green and tender herbs which come out after the savannah fires, but, when the grass is high and hard, the zebras cut it up to a certain level from the ground, and so doing, render it appetible for the wildebeests, who love the short and low grass, and for other antelopes. 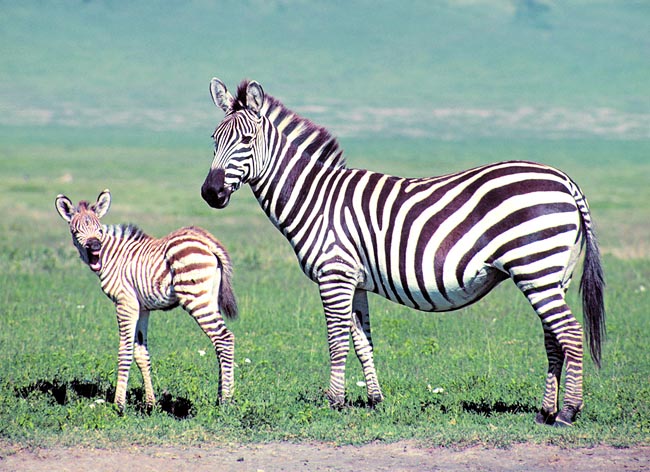 Like our fingerprints, striae are typical for each animal © Giuseppe Mazza

It is frequent, for this reason, to see gnus and zebras grazing in the same area in a nutrient cycle known as rotation grazing. Even if they are grazers, at times the zebras switch to the browsing, tearing leaves and twigs from plants and bushes, especially in the periods when the turf is scarce, or even they dig with their hooves looking for tubers.

Their upper lip is strong and much mobile and is used for pushing the grass between the incisors, where it is then cut.

As they have a diet base on vegetables often coriaceous and rich of fibres and having a digestive system less efficient than that of the ruminants in the digestion of the cellulose, the zebras need much water and drink regularly, at least once per day.

They are also finicky drinkers, as the elephants are, and have a clear preference for clear and clean water, even if, in case of necessity, they adapt to the murky and muddy one.

The Burchell’s zebra can be 140 cm tall (males) at the withers and have a weight of 340 kg, whilst the females are lighter (an average of 250 kg) and are little lower, however, as I said, the distinction is not so simple and immediate and often it is necessary to observe for long time a group of these herbivores for determining the sex, also basing on the behaviour: with some experience, at least the stallion of the harem will be recognizable from his behaviour, especially in case of alarm. 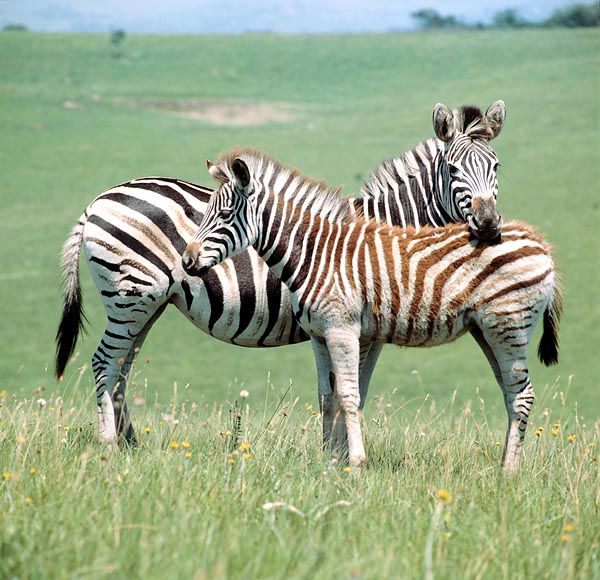 The Equus quagga burchellii is dirtier, even buff © Giuseppe Mazza

The adult stallion is not territorial and does not defend its “dominion”, but is the owner of a harem, which it will defend tenaciously against the rivals and at times, against the predators, if the flight is not possible.

It is able to kick with the force of a catapult and to crush the skull of a lion, if it is able to pull off a blow, and this has occurred, indeed, several times; it is also capable to inflict devastating bites, so much that in at least two instances I have seen a male missing completely of an ear.

In case of danger, the harem flees and the stallion keeps in the rearguard. In these cases, the typical white and black stripes are useful for keeping the group united, as also the zebra has a white and black vision.

The reproduction is not strictly seasonal and the mating may happen in whatever time of the year, but there is a peak of activity during the first part of the rain season.

The female can get in oestrum already ten days after a delivery, but is not, in such case, in conditions for procreating, as this will be possible not before one year.
The male tests the receptivity of the female with the flehming, a sort of a “grimace” with raising and curling of the upper lip, uncovering the teeth.

This movement (common to many herbivorous as well as carnivorous species), allows to draw odorous or liquid particles present in the urine of the female and to establish if she is receptive, despatching them to the vomeronasal organ which will analyse them and the mating will take place only if the female is in estrus. The coupling is reiterated at intervals of two or three hours, usually for one or one and a half day and often the other females of the harem show clear signs of jealousy for the … favourite of the moment, especially if she if is of low rank. In this case, it is easy to observe menacing postures, with the ears flattened and also malicious bites are not rare. 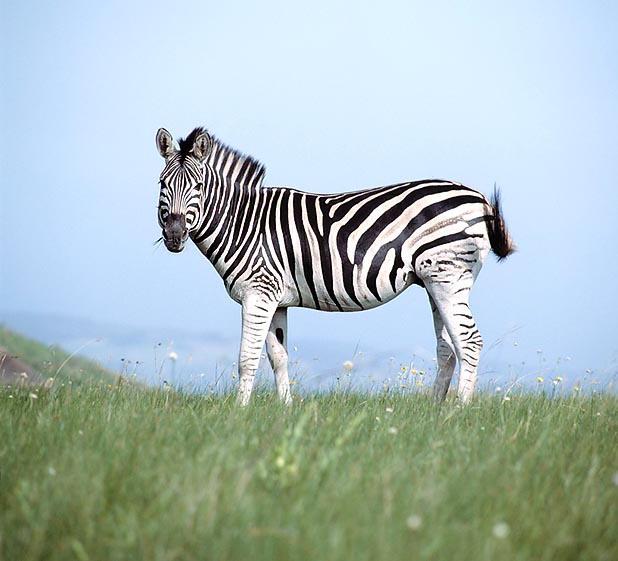 When born, the baby is extremely precocious and is capable to get up after a ten of minutes, to walk after half an hour and to trot along and nurse after only an hour after the birth. This is necessary for its security and survival as, being an animal of open spaces; it cannot rely on a cache or on the immobility and therefore must be able to follow the mother and the group in the shortest possible time. The foal leaves the familiar group spontaneously when about two years old, and, reached the five years, begins to try to form its own harem, approaching other herds with the intention of “abducting” young females, one by one, but this is not always easy or possible, because every harem is defended by a sultan, well decided to keep its concubines and to defend also the young fillies it has generated.

The result stands often in furious rustic fights but it happens, some times, that a young pretender, even if avoiding the fight, where quite possibly might be the loser, can manage to mount, on the sly, the young daughter of the owner of the harem and to fecundate her. In such way, the female becomes legally his property and will faithfully follow the male in its new harem.