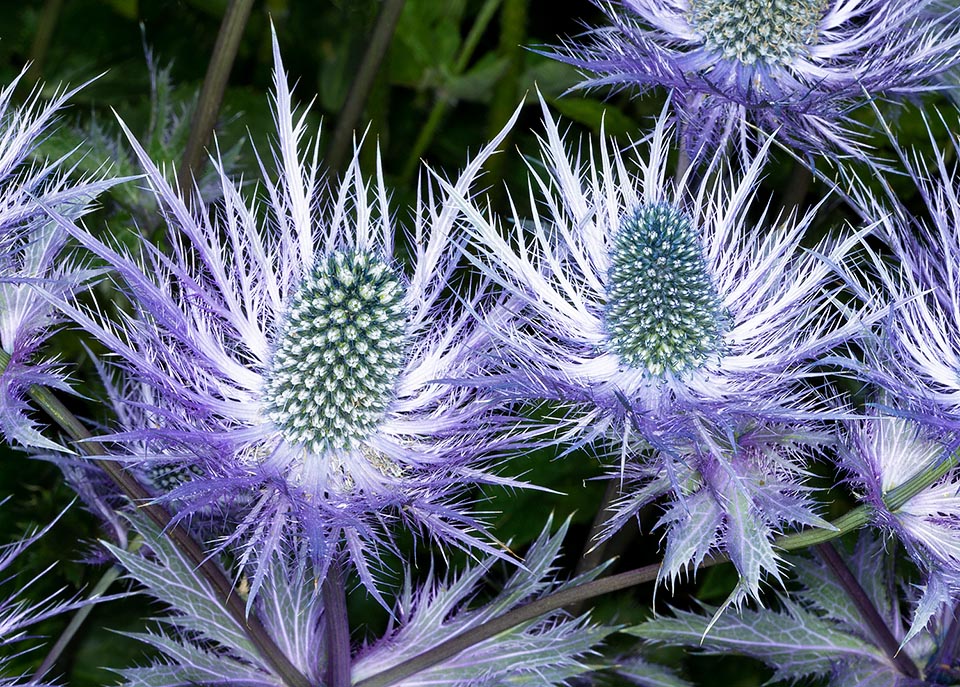 Noble relative of carrots and parsley, the Queen of the Alps (Eryngium alpinum) is a perennial herbaceous species, 30-100 cm tall, present also in the Jura and in Balkans © Giuseppe Mazza

The Eryngium alpinum L. (1753), typical Alpine species, in particular of the Western and Eastern Alps, is present also in the Jura and in the Balkans. It grows between the 1500 and the 2500 m of altitude on pastures, grassy and humid sites in general, including ledges and escarpments.

The name of the genus Eryngium comes, Latinized, from the Greek term “ηρύγγιον” (eringhion) = cardoon, whilst the specific term alpinum = of the Alps, refers, in Latin, to the habitat where it lives.

The Eryngium alpinum is a 30-70 cm tall species, exceptionally 100 cm, of green glaucous colour, with erect posture. It is a scapose hermicryptophyte, that is a perennial plant bearing the buds at the level of the soil and develops an elongated floral axis. The snow, the leaves and the dry leaves of the plant, cover and protect the buds from the harsh winters.

The inflorescence is an umbel that carries on a function of attracting the pollinators. It has a diameter of 5-8 cm and is formed by 2-3 compact ovate-oblong capitula, 1,5 cm broad and 2-4 cm long, rarely 6 cm. 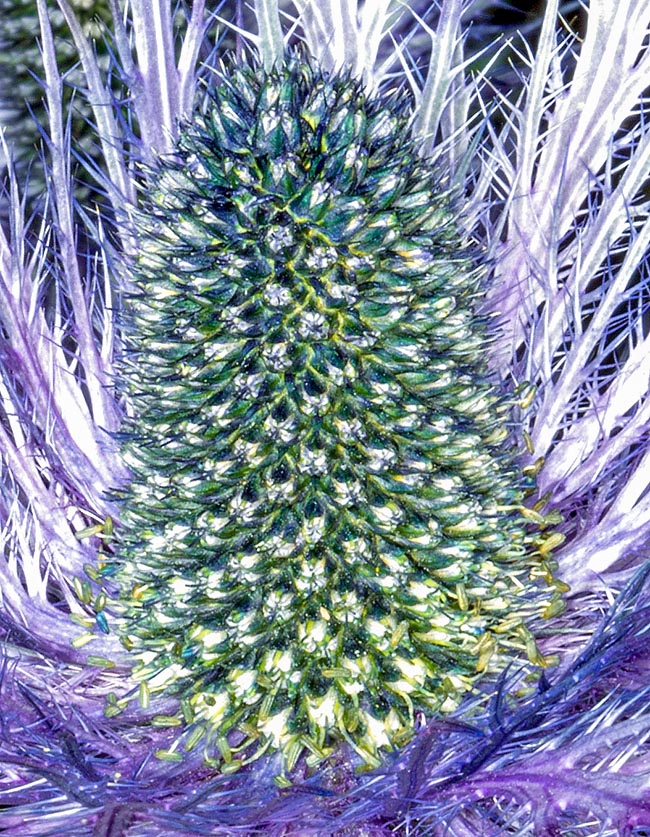 The involucre of the capitula is formed by 10-20 erect bracts, of amethyst blue colour, 6 cm long at most, bipinnatifid, with rigid and spinescent laciniae.

The capitula, the involucre and the upper parts of the plant have a splendid purplish azure colour, from time to time defined amethyst blue, cobalt blue and even, due to its metallic reflections, steel blue.

The flowers, minuscule, measure about 2 mm. They are actinomorphic, that is with radial symmetry, and pentamerous, that is formed by 5 petals and 5 sepals. The peripheral flowers are sterile or uni-sexual, the inner ones are hermaphrodite.

The bracts of the involucre, 12 to 20, have a radial symmetry and rigid consistency. They are bipinnatifid, with spinescent lobes.

The calyx is formed by 5 erect ovate-lanceolate sepals, 2-3 mm long.

The stamens are 5, the ovary is inferior, with 2 divergent styles.

The blooming occurs between July and September. The pollination is entomophilic, that is entrusted to the insects.

The basal leaves have undivided edge, triangular cordate, of soft consistency. They are long pedunculated, 5-20 cm broad and 15-25 cm long. The margins, of bright green colour, are irregularly toothed, with weak spines on the apices.

The cauline leaves, going up along the stem, change from sub-sessile to sessile and present margins increasingly incised (palmatisect). The margins and the apices become increasingly spiny.

The stems are glabrous, erect, ramified in the upper part, of bluish green colour. In the central part they have some longitdinal violaceous striations. The fruit is an ovoid spinescent achene of 4-6 mm. The root system is taprooted, deep, compact, well developped.

The habitats where it grows are varied, in natural ones such as meadows, pastures, razed prairies, nival small valleys, grassy edges of the woods, with tall herbs, woods of mountain pines, arbustive as well as in environments more linked to the presence of man, such as paths and rural roads, abandoned areas, dunghills, railway escarpments, ski slopes and artificial grasslands.

The species has become extremely rare, even under risk of extinction in some locations, due to its beauty and the consequent indiscriminate collection.

Presently it is a plant under absolute protection and the few remaining stations are assiduously watched and monitored. Luckily, there is an increasing number of nurseries that render available cultivated small plants, thus discouraging the collection of specimens in nature. 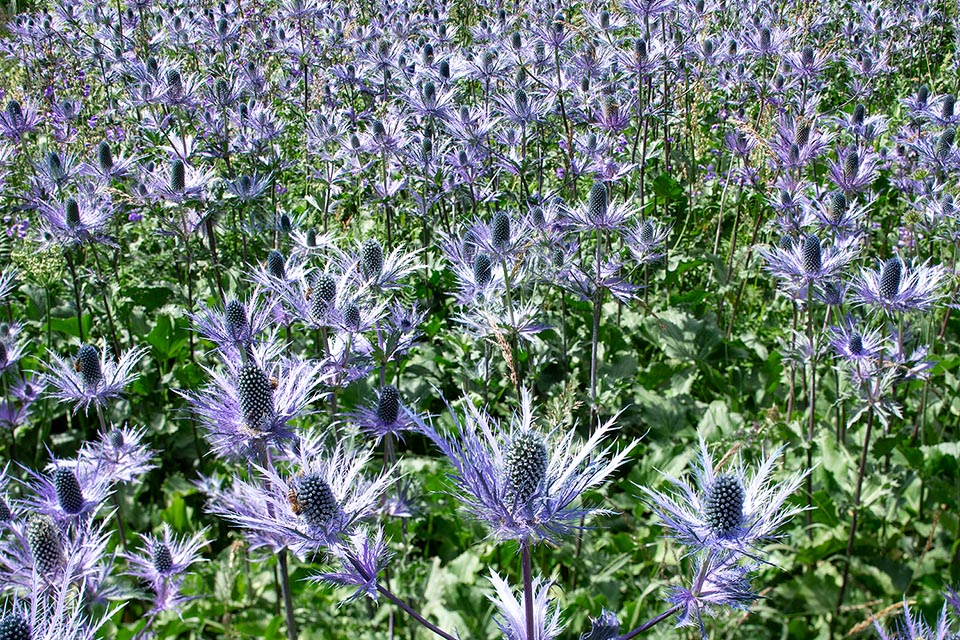 Endangered and protected in nature due to the indiscriminate collections, grows at 1500-2500 m of altitude preferably on humid grassy pastures © Giuseppe Mazza

It is cultivated in orchards and gardens in many varieties and with different utilizations, as high herbaceous border plant or for mixed flowerbed. It is also collected before that the flowers open and duly dried up, as element to be inserted in the dry floral compositions.

It is chosen for its rusticity as well for its so particular colour, purplish blue with metallic reflections, quite uncommon among the garden plants. It is cultivated in groups of more specimens or in combination with other perennial herbaceous plants of contrasting colour, for a best exploitation of its peculiar characteristics of shape and colour.

The Eryngium alpinum is not particular for what the substratum is concerned. In nature it grows equally on limestones, dolostones, calcareous schists, siliceous schists, sandstones. The ideal soil, however, has a pH tending to basic, is moderately fertile, well drained (it fears water stagnations especially during the cold season), averagely humid, especially during the phase of growth.

Being an Alpine species, its cultivation in mountain gardens is not recommended. It loves full sun and in winter bears temperatures up to -15 °C. The diameter of the adult plant is of about 50-60 cm. For the specimens cultivated singly it may aver useful the utilization of a stake for its support. 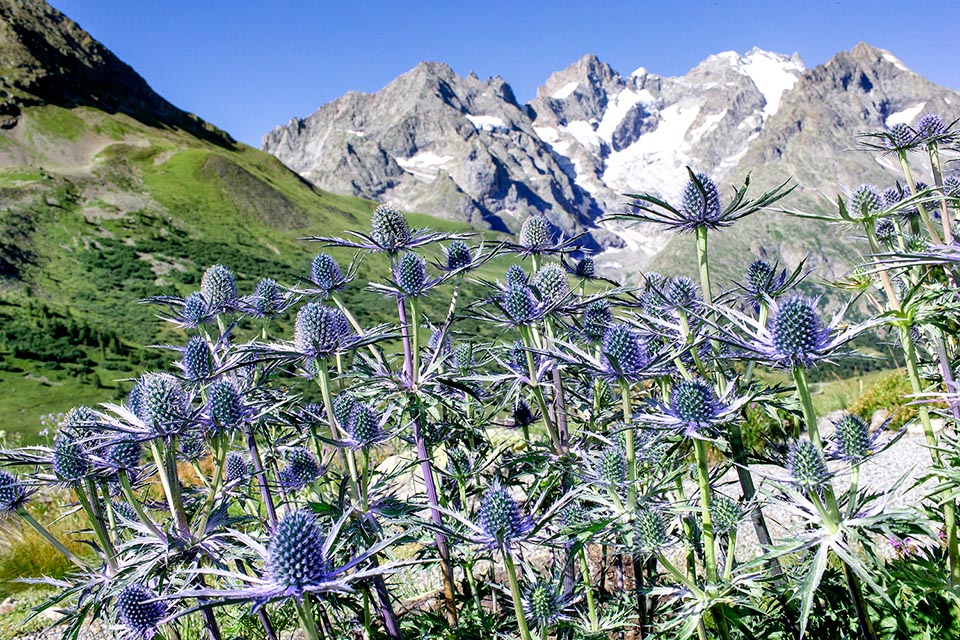 The variety ‘Ametysth’ has smaller capitula, of a more intense blue violet colour. The variety ‘Blue Star’ is vigorous and robust, with abundant capitula of intense blue colour, suitable for forming monospecific groups or combined with other plants, for instance, with gramineous plants or species belonging to the genera Oenothera and Verbascum.

It propagates by seed in autumn, by division of the tufts in spring and by root cutting in winter.

The genus Eryngium includes about 230 species distributed all over the world, perennial or annual, deciduous or evergreen. Those of the Mediterranean regions and of Central Asia are mostly suitable for arid and rocky environments, whilst the species of the American continent ar more diffused in the humid locations of the temperate-warm regions. Many of these species, thanks to their rusticity and their decorative value may be inserted in the natural gardens. Here are some examples:

Eryngium amethystinum – Italy, Balkans – it blooms in full summer. It produces cylindrical 2-3 cm capitula, carried by azure silvery stems. The flowers are of blue amethyst colour, the spiny bracts are of silvery green colour. It loves the sunny soils, dry and well drained, it fears the winter humidity. 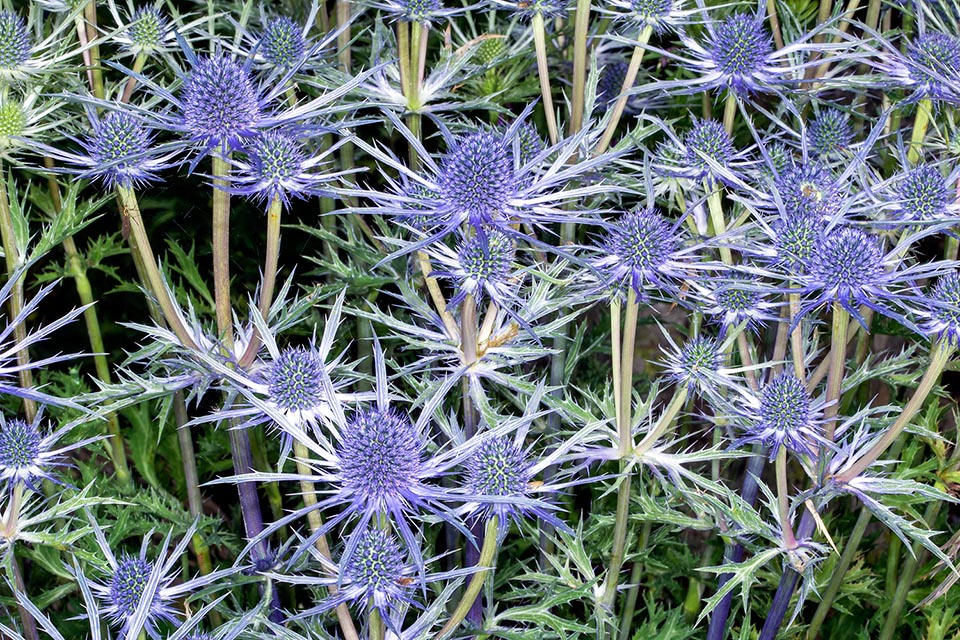 The Eryngium x zabelii, here shown, is by some considered synonym of Eryngium x oliverianum. They are all easy plants, if the climate is suitable, to cultivate in full sun © Giuseppe Mazza

Eryngium bourgatii – Pyrenees (Spain) – it has pinnatifid basal leaves, with spiny lobes, of dark green colour with silvery veins. It blooms in full summer. It produces 1-3 cm cylindrical capitula, carried by azure stems. The flowers are green blue, the bracts, up to 6 cm long, are silvery azure. It has the same requirements as the previous species. The variety ‘Oxford Blue’ has a darker silvery blue colour.

Eryngium giganteum – Caucasus – The cylindrical capitula, up to 6 cm long, bloom in summer. The flowers, of pale green colour, while opening, become then steel blue. The bracts, up to 6 cm long, of silvery grey colour, have spiny margins. They have the same exigencies as the previous species. The variety ‘Silver Ghost’ has narrow bracts of silvery colour.

Among the hybrids, frequent in cultivation, having the same horticultural exigencies, we recall the Eryngium × oliverianum, known also as Eryngium × zabelii, and the Eryngium alpinum × Eryngium giganteum that has the basal leaves of oval shape, with margins slightly spiny, of dark green colour, with well evident veins. It blooms in late summer, producing capitula of violaceous colour, about 4 cm long, and linear and spiny bracts of silvery colour with purple reflections.

Eryngium alpinum was last modified: May 31st, 2020 by Peppino