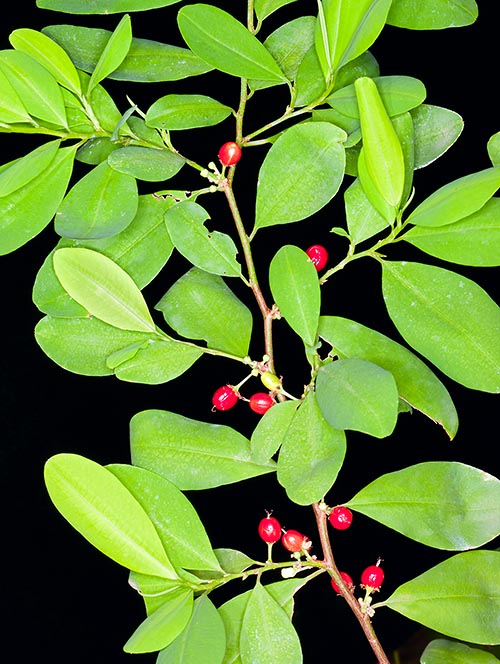 The species is native the Andean semi-arid regions of Colombia, Ecuador and Peru.

The name of the genus is the combination of the Greek terms “erythros” = red and “xylon” = wood, due to the reddish colour of the wood of some species belonging to the genus; the name of the species is the combination of the Latin terms “novus, a, um” = new and “granatensis” = of Granada, with reference to one of its origin places, the Colombia, which was called, at the time of its conquest by the Spaniards, Nueva Granada.

The Erythroxylum novogranatense (D. Morris) Hieron. (1895) is a shrub or evergreen small tree, tall up to about 3 m, with leaves, on an about 0,5 cm long petiole, alternate, obovate or oblong-elliptic, 2-6 cm long and 1-3 cm broad, of a bright green colour.

The flowers are axillary, hermaphrodite, solitary or grouped, produced practically continuously, with five yellowish white petals, oblong, of about 0,4 cm of length and 0,2 cm of breadth, and 10 stamina united at the base of a tube.

The fruits are oblong drupes, of red colour when ripe, about 0,8 cm long and of 0,3 cm of diameter, containing only one oblong seed.

Besides the species, a variety is known, the Erythroxylum novogranatense var. truxillense (Rusby) Plowman (1979), which differs due to the absence, in the leaf, of the longitudinal lines at the sides of the central nervation, which are present in the species.

It reproduces by seed which has a short duration of germination ability, about three weeks.

The leaves do contain 13 different alkaloids, amongst which the main one is the cocaine, whose effects are well known.

The habit of chewing the leaves, in particular those of the similar species, the Erythroxylum coca Lam. (1786), of the local Andean populations is very old and was initially reserved to the priests for ritual purposes, was utilized as a stimulant and for relieving the fatigue, the leaves were also used as anaesthetic in surgery. 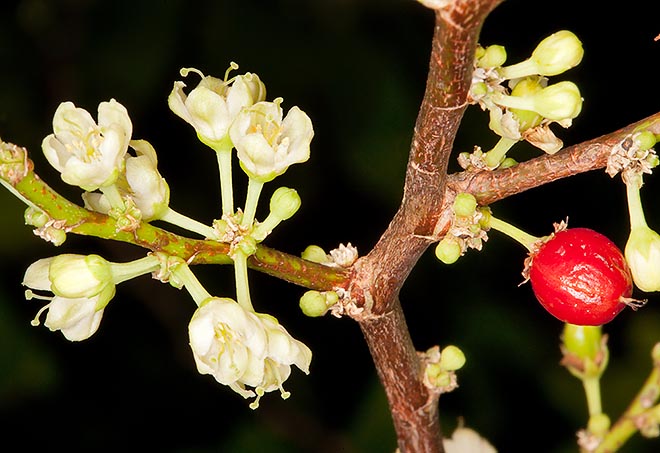 The use of the leaves had also a nutritional value, especially in times of famine, due to their contents of proteins, carbohydrates, mineral salts and vitamins.

Its utilization was forbidden by the Spanish conquerors because related to pagan rituals, but at the same time it was authorized and encouraged for getting higher performances from the enslaved natives, in particular for those employed in the most tiring works and in adverse environmental conditions, such as the work in the mines of silver placed at high altitudes, thing which contributed to a greater diffusion also among the populations which, before, did not utilize it. In medicine, the cocaine, mostly gotten from the previously mentioned similar species being insignificant the contribution, about the 5%, of the Erythroxylum novogranatense to the total production, both legal and illegal, has been utilized chiefly as valid local anaesthetic, then replaced by substances derived from it by hemi-synthesis, or synthesis, with the same chemical structure, but with less toxic collateral effects. Its cultivation is illegal apart the cases where it is authorized for medicine and research purposes.