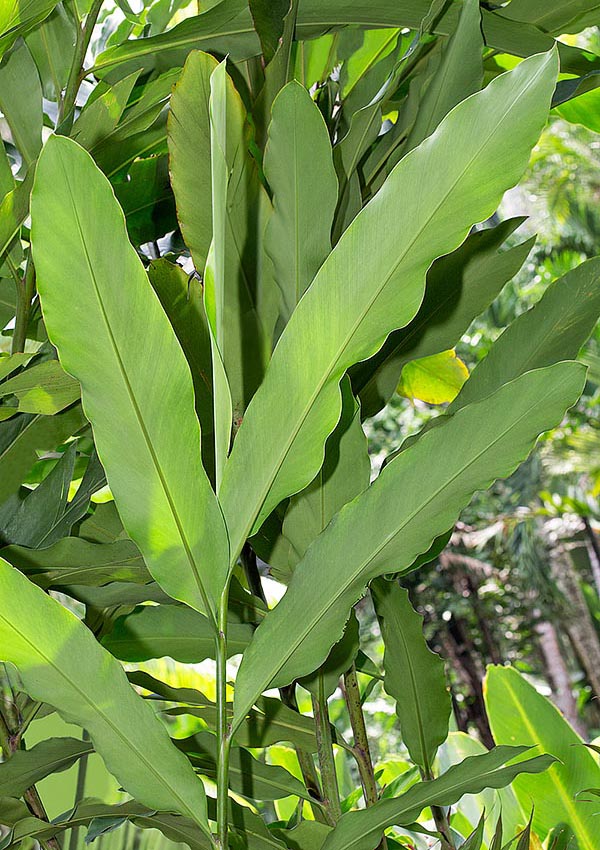 The species is native to Borneo (Brunei and Sarawak) where it grows at the margins of the pluvial forests and on the banks of the water streams, at low and medium altitudes.

The name of the genus is honoured to the XVIII century German botanist Andreas Ernst Etlinger, author of the “Commentatio Botanico-Medica de Salvia” (1777); the specific name is the combination of the Latin adjectives “fimbriatus, a, um” = fringed and “bracteatus, a, um” = equipped with bracts, with reference to the floral bracts with fringed apex.

Etlingera fimbriobracteata (K.Schum.) R.M.Sm. (1986) is a perennial rhizomatous herbaceous species, evergreeen, 1,5-6 m tall that forms tufts with pseudostems rather spaced provided of oblong leaves with entire margin and pointed apex, 120-130 cm long and 14-18 cm broad. Inflorescences on short peduncle, often hidden by the layer of vegetal debris covering the soil of the forest, directly from the rhizome close to the base of the pseudostem.

The inflorescences, about 12 cm long, are formed by sterile coriaceous bracts, imbricate, spirally arranged, that enclose a compact spike formed by bright red bracts with fringed apex, 3-3,5 cm long, that subtend up to a one hundred of intense yellow flowers that open gradually for some weeks.

Tubular calyx about 5 cm long, corolla with tube shorter than the calyx, about 4 cm, and 3 oblong lobes, obovate labellum, anthers with orange apex and red stigma. Globose fruit, about 8 cm long and 10 cm broad, fomed by a crowd of close capsules of reddish colour when ripe. It propagates by seed, but usually by division utilizing an about 20 cm long portion of rhizome with at least a pseudostem provided of leaves, shortened in order to reduce the transpiration, and some dormant buds. The rhizome is to be placed just under the surface of the loam, that must be rich of organic substance and particularly draining, to avoid stagnant water rottenness, in an ambient with temperatures of 26-30 °C and humidity around the 90%.

Species with ornamental foliage and curious bright inflorescences, poorly known out of the origin zones and rarely cultivated in gardens and botanic collections. Markedly tropical, it needs a constant warm-humid climate, an exposition in full sun or partially shaded and draining soils rich of organic substance maintained constantly humid. 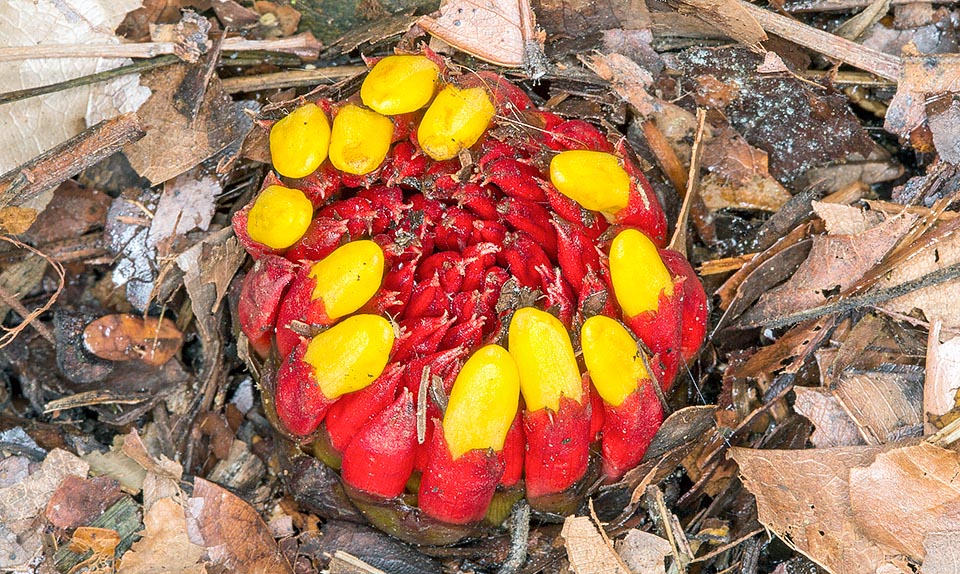 The odd inflorescences have even 100 intense yellow corollas that open gradually for weeks. They pop up like mushrooms on the ground, hidden in the underwood © Giuseppe Mazza

Outside the tropical zones it can be cultivated in open ground or in capacious containers exclusively in large warm-humid greenhouses, with lowest temperatures not under the 18 °C and humidity of 80% and more. The waterings must be frequent, but without stagnations, being easily subject to root decay, allowing the superficial layer of the loam to dry up before giving water again. Useful are the nebulizations, to maintain a high level of humidity, with water at ambient temperature and not calcareous, to avoid unaesthetic spots on the leaves. The fertilizations are to be done in spring-summer, preferably with slow releasing hydrosoluble products with microelements. It is easily subject when in a confined space to attacks of parasites, therefore it must be frequently controlled in order to be able to intervene promptly with specific products. 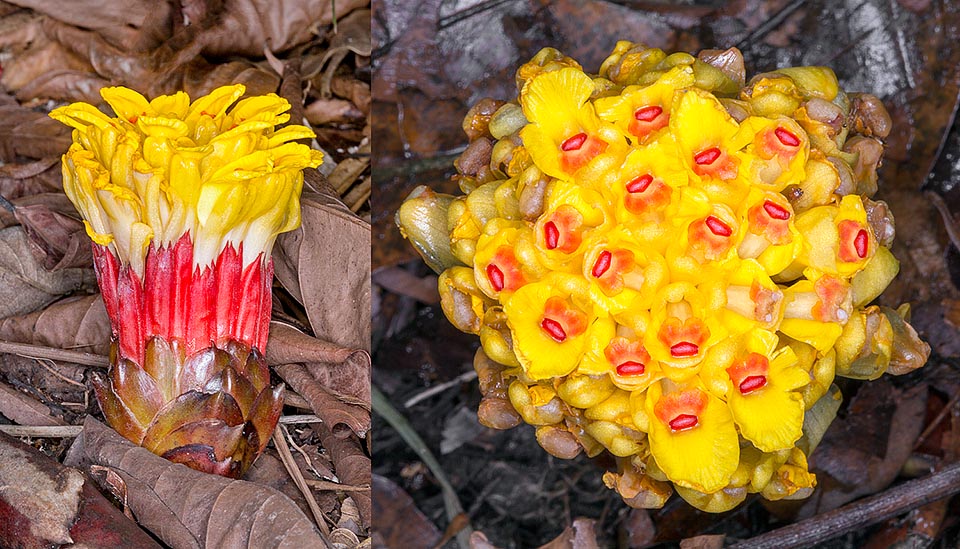 Inflorescence from side and from above. The coriaceous, imbricate bracts are spirally arranged. They protect a compact spike with bright red floral bracts subtending long tubular flowers. Edible fruits and buds. Various parts of the plant have bioactive compounds with antimicrobial and antioxidant properties © Giuseppe Mazza

In the origin zones the fruits and the young buds are consumed as vegetable by the local populations, added in traditional dishes, furthemore the leaves are used for wrapping food, fabricating mats, hats and other handicrafts and as cover for makeshift shelters in the forest. Laboratory studies have evidenced in the extracts of various parts of the plant the presence of bioactive compounds with antimicrobial and antioxidant activity of potential interest for the official pharmacopoeia.

→ To appreciate the biodiversity within ZINGIBERACEAE family and find other species, please click here.