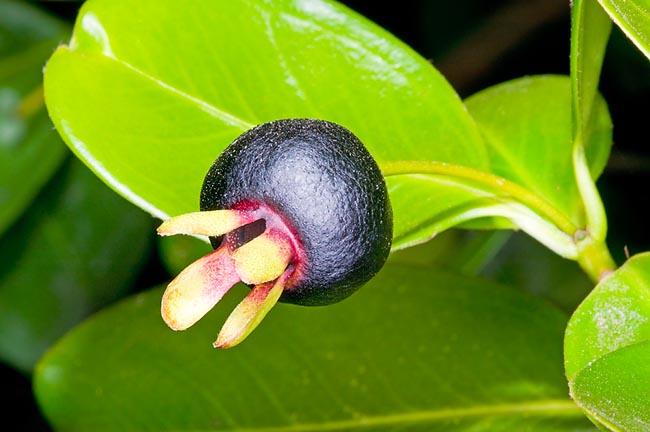 This species is native to southern Brazil (Paraná, Rio de Janeiro, Santa Catarina and Sao Paulo), where it grows in the humid coastal forests on mainly sandy soils.

The genus was dedicated to the memory of the general, diplomat and patron Eugene of Savoy (1663-1736); the Latin name of the species, “brasiliensis” = of Brazil, refers to its origin country.

The Eugenia brasiliensis Lam. (1789) is an erect, rather slow-growing, evergreen tree, up to about 10 m tall, with greyish bark which, with the age, gets fissured and peels in papery strips, and thick foliage. The leaves, on an about 1 cm long petiole, are opposite, obovate or elliptic with curved, entire margins, coriaceous, 8-15 cm long and about 5 cm broad, of a glossy dark green colour on the upper page, pale green below; the young buds have a dark purple colour. The flowers, of about 2,5 cm of diameter on a short peduncle, usually solitary of in groups of 2-3 at the axil of the leaves of the young buds, have four green sepals, four white petals and a hundred of white stamina; in the countries of origin it may sporadically flower again during the year. The fruits, which ripen quickly, in a month from the flowering, are globular berries of 1,2-2,5 cm of diameter, with persistent sepals at the extremity, of colour going from dark purple to almost black when ripe and pale pulp, with a taste similar to that of the cherries, usually containing one to three greyish seeds; there are varieties with yellow and red fruit.

It usually reproduces by seed which germinates in about one month; the fructification begins starting from the fourth-fifth year of age. Recourse is done to the cutting and air layering in the case you wish to reproduce a particular variety.

It is a species adding to great landscape value, due to its luxuriant foliage, the production of fruit with a pleasant taste, suitable for zones with humid subtropical climate and, marginally, warm temperate, where it can resist to decreases in temperature to about -3 °C for a short time. It prefers an exposure in full sun, but it adapts to a slight shade, and deep soils, sandy, rich of organic substance, possibly acidic, and availability of water all over the year, as it does not bear dry periods; it is therefore to be regularly irrigated is cultivated in climates having little or not at all rainy summers. It may be utilized as isolated specimen in parks and gardens or for creating barriers, also as windbreak. The fruits are consumed fresh or employed in sweets, ice creams and for preparing jams.