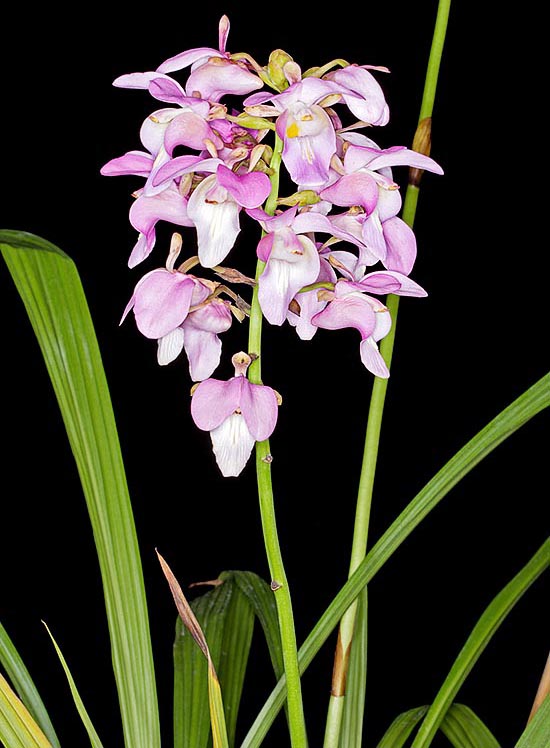 Diffused in tropical Africa, the Eulophia bouliawongo is a great sized terrestrial species: erect 1,2-2,5 m floral scape, ending in a 22-30 cm raceme with flowers of 5,5-6,5 cm of diameter. In Gabon the big rhizomes are used to prepare an infusion against the colics © Giuseppe Mazza

The species is native to tropical Africa: Angola, Cameroon, Congo, Equatorial Guinea, Gabon, Guinea Gulf Islands, Nigeria and Zaire, where it grows in swampy areas and along the banks of the rivers up to about 700 m of altitude.

The name of the genus is formed by the Greek prefix “εὖ” (eu) = well and by the substantive “λόφος” (lophos) = height, with reference to the crests present on the labellum.

The name of the species comes from the local name, boulia wongo, used in Gabon.

Oblong linear sepals with obtuse apex, retroflexed and concave, of about 1,5 cm of lenght, greenish with a slight pinkish shade, oblong-elliptic, 2,5-3,5 cm long petals of pink or pale purple colour, trilobed labellum having the same colour as the petals, 3-3,8 cm long, with erect semi-ovate lateral lobes and oblong-elliptic or obovate median lobe run at the base by three yellow crests.

The fruits are oblong dehiscent capsules; it reproduces by seed, in vitro, and by division.

Imposing species standing among the biggest of the family of the orchids, requires full sun or slight shade, high temperatures all over the year and high ambient humidity, it is therefore cultivable in open-air exclusively in the humid tropical and subtropical climate zones, and finally is not particularly demanding about the soil, even if heavy. 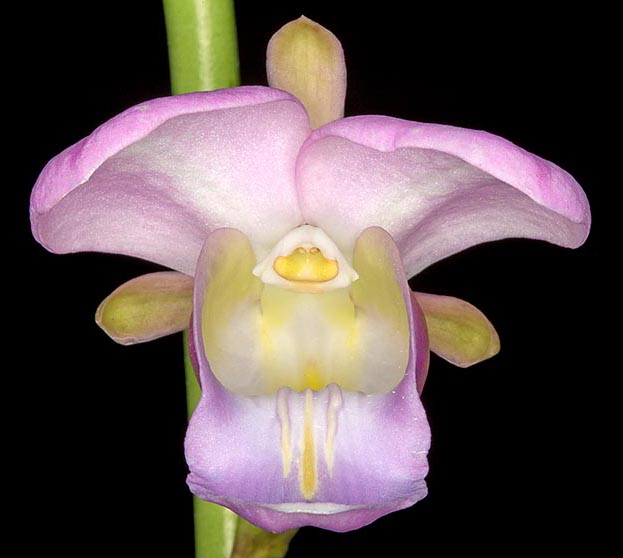 Requires abundant waterings during the growth, to be almost stopped in the vegetative stasis © G. Mazza

The fertilizations, during the growth, are to be done preferably with balanced products with microelements.

It can be cultivated in pot, keeping in mind in its placing the sizes it can reach, in draining loam rich of organic substance. Transplants and repottings are to be done at the vegetative restart.

In Gabon the rhizomes are utilized to prepare an infusion against the colics.