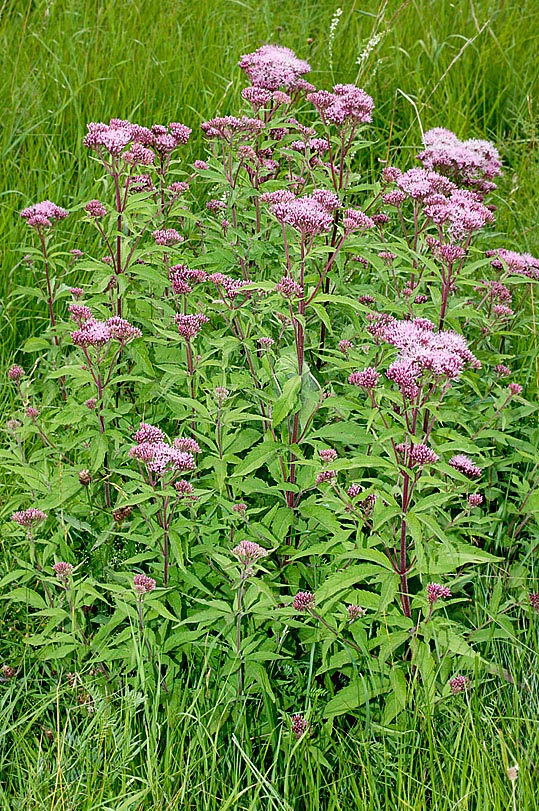 The name of the genus of this plant was coined by Linnaeus to commemorate one of the first scholars of the phytotherapy: Mithridates Eupator, king of Pontus, who would have been the first to use the species in one of his famous therapeutic mixtures; the term cannabinum refers to a certain resemblance of the leaves to those of the Hemp (Cannabis sativa).

It has opposite palmate-veined leaves, more or less pubescent like the whole plant, and small tubolous flowers (capitula), of rosy-fleshy colour, slightly perfumed, united in a corymbiform inflorescence. The blooming lasts from June to November.

Each small floriferous capitulum composing the inflorescence produces 5 or 6 tiny seeds (botanically called achenes), 3 mm long, surmounted by a little longer pappus, which will be useful for favouring the dissemination.

It lives in humid locations, the banks of ditches, from the plain up to 1350 m of altitude in the temperate zones.

For the phytotherapic uses, are collected the aerial parts of the plant, harvested in bloom, and the root; these contain a bitter substance, traces of saponin, en ethereal oil, tannins, resins and inulin; the root contains also the sour substance eupatorium-picrine, taraxasterol, flavonoids furnishing to the plant hepato-biliary, cholagogic and diuretic, depurative (the infusion), purgative (the decoction) properties; the root is choleretic. The roots are used as cholagogic, laxative, hepato-protective, expectorant; the leaves also as diuretic and depurative.

Externally, it is employed n the eczemas, in the furunculoses and in the psoriases; some authors admit a certain antiviral action and recommend the use of this plant as anti-flu. The parts of the plant, once exsiccated, loose gradually their properties, thence it is necessary to use recent and well preserved drugs.

The leaves have a bitter taste and only the goats, among the domestic animals, eat it every now and then; it seems that the wounded deer use it for relieving their wounds. In the past, the water distilled from the flowers was used as detergent for caring the bleary eyes and in the veterinary medicine they suggested to give as food to the winded horse, along with the fodder, some flower heads of the plant. Among the medicinal preparations, we mention the appetizing decoction, laxative-cholagogic and diuretic which is done with a handful of chopped and bruised leaves boiled in a half a litre of water till reduction of one third. 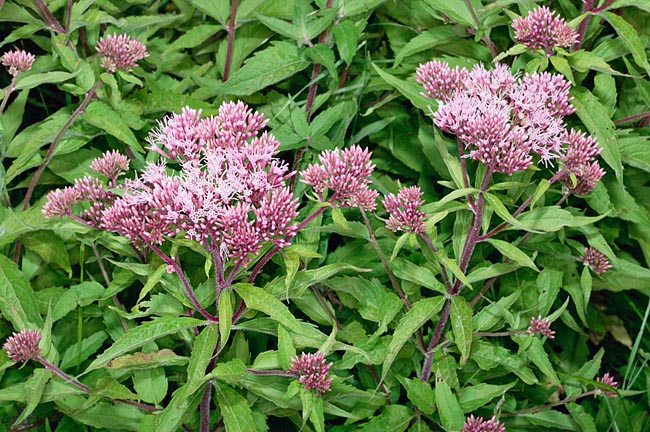 This is to be drunk in a day splitting it in four-six doses, and the stomatic-diuretic wine for which are necessary a handful of flower heads in a litre of a good dry white wine (eg Vernaccia).

They must be left to macerate for one week and then the whole is to be filtered.

To drink two or three shots per day, half an hour after the meals.

The genus Eupatorium counts only one spontaneous species in Europe, against the 40-130, depending on the author, in northern and tropical America, Asia and Africa.

The floriculturists have drawn amply from this list, probably still incomplete, for offering the collectors plants with splendid flowerings suitable for forming fences, for the cultivation in pot and as cut flowers.