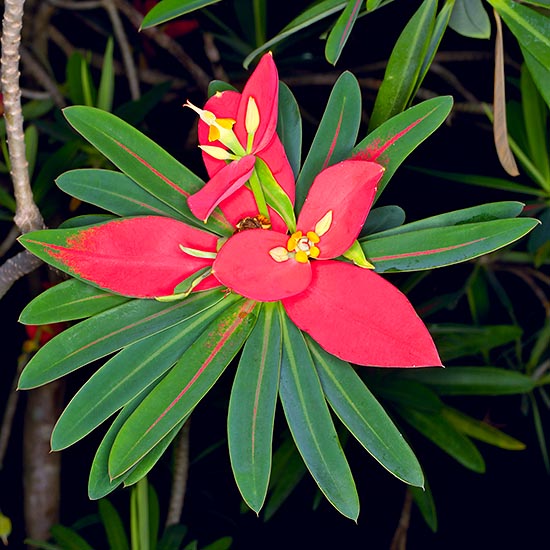 The species is native to Bahamas, Cuba and Jamaica, where it grows in semi-arid areas on calcareous soils in full sun.

The genus gets the name from Euphorbos, personal physician of Juba II (52 BC – AD 23), king of Numidia, who dedicated him these plants in an opus describing its medicamental virtues; the name of the species is the Latin adjective “puniceus, a, um” = purplish, with obvious reference.

The Euphorbia punicea Sw. (1788) is an unarmed evergreen shrub or small tree, ramified, which usually does not exceed the 3-4 m, even if the oldest specimens in the wild may reach the 8 m, with semi-succulent stems, on which are visible the prominent traces of the fallen leaves, carrying, at the apices oblong coriaceous leaves, of dark green colour.

Terminal inflorescences, the typical cyathia of the Euphorbiaceae, with small flowers, formed by a greenish ovary and a campanulate involucre surrounded by yellow nectariferous glands, which have at the base two bracts (modified leaves) of a bright red colour, in clear contrast to the colour of the leaves; the bracts have the function of attracting the attention of the pollinator, like the petals of a single flower.

The fruits are ovoid capsules containing seeds, ovoid too, which, when ripe, are expelled and thrown at a great distance. Seen that the receptivity of the stigma does not match with the release of the pollen, for fostering the crossed fecundation, very unlikely a single plant can fructify.

It is a short-day species, the induction of flowering is given by the reduction of the light hours in autumn. 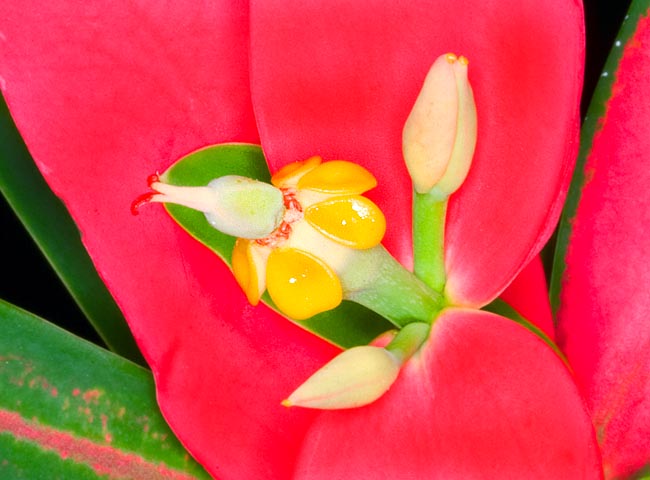 It propagates by seed, air layering and cutting, to be done at the end of the winter and placed to root, after having dried up the cut for 2-3 days, in coarse sand or agriperlite kept slightly humid. Very ornamental species, but still rather rare in cultivation, recalls, in small, the well known and diffused Euphorbia pulcherrima Willd. ex Klotzsch (1834).

Of slow growth and of easy cultivation, it requires for an optimal growth, an exposition in full sun and soils, even poor, particularly draining being easily subject to rooting rottenness in presence of water stagnations, it bears high temperatures and long drought periods, it is therefore ideal for desert gardens; with proper prunings it can be grown as tree as well as low and well ramified shrub.

Suitable for tropical and subtropical climates, its cultivation can be tried, in the mildest zones with warm temperate climate, where the temperatures close to the 0 °C are a short-lasting exception. Elsewhere, it can be kept in pot, rather deep, in soils with addition, for at least 1/3, of coarse sand or agriperlite, for improving the drainage, with lowest winter minimum temperatures preferably never to drop under the 14 °C. The waterings must be regular in summer, but allowing the soil to dry up before giving water again, and practically suspended in winter. The latex which exudes from all the parts of the plant may be irritant.

The species in inserted into the appendix II of the CITES (species whose trade is internationally ruled).