The species is native to central-northern Madagascar, where it grows in the open coastal forests mainly on calcareous rocks.

The genus takes its name from Euphorbus, personal physician of the king of Numidia, Juba II (52 BC – AD 23), who dedicated him these plants in an opus which was describing their medicinal virtues; the species is honoured to the French botanist and collector René Viguier (1880-1931).

The Euphorbia viguieri Denis (1921) is a very variable deciduous species with a single angular stem, usually not ramified, green, up to about 80 cm tall with a diameter up to 3 cm, on which are evident the whitish elliptic scars, trace of the fallen leaves, placed on 5-6 vertical rows, with, on the sides, robust whitish thorns, 1,5-2 cm long, flat at the base and subdivided towards the apex in several thin thorns. 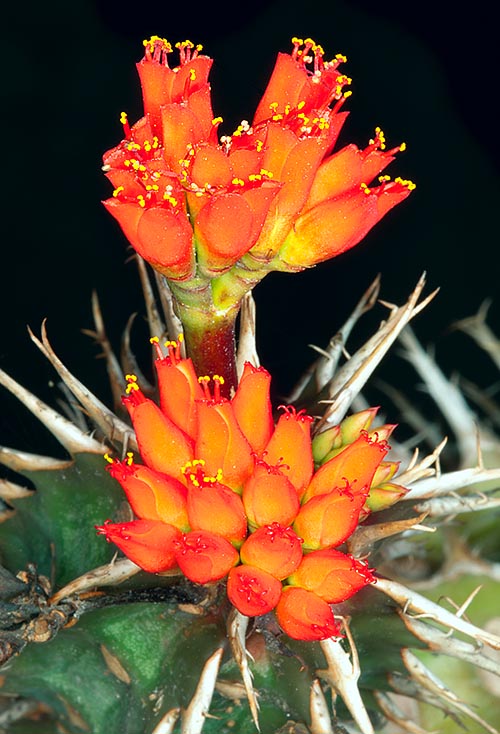 The leaves are simple, ovate, of bright green colour, 6-15 cm long and about 3 cm broad, grouped at the apex.

The cyathia, the typical inflorescences of the Euphorbiaceae, are surrounded by two bracts (cyathofills) of bright red colour, and are, in turn, united in subsessile axillar cymes or on a peduncle long up to about 10 cm; the cyathia can be unisexual, even on different plants, or bisexual.

The fruit is a three lodge’s capsule, each one containing only one seed which, when ripe, is expelled and thrown far away.

It reproduces by seed in particularly draining calcareous soil; the germination takes place in 2-3 weeks at the temperature of 22-24 °C.

Four varieties have been described, besides the Euphorbia viguieri var. viguieri, which has pedunculate inflorescences and unisexual cyathia, which are distinguished mainly by the different length of the peduncle and the bisexual cyathia, but about which not all are in agreement as they deem them as being only ecotypes:

Very ornamental species and of fairly easy cultivation, much appreciated by the collectors of succulents, it can be cultivated in open air in the tropical and seasonal subtropical climate zones, as it does not bear temperatures close to the 0 °C, in full sun, preferably, or slight shade, on perfectly draining calcareous soils.

When in pot, it is cultivated in an as much as possible luminous position in calcareous soil with addition of coarse sand or crushed stones for improving the drainage, with lowest winter temperatures over the 12 °C; the waterings must be regular in summer, during the vegetative period, but allowing the substratum to dry up before giving water again, stopped completely in winter.

All the parts of the plant are considered as toxic, the contact of the lymph with the eyes and the mouth is to be avoided.

The species is inserted into the appendix II of the CITES (species whose trade is internationally ruled).

Euphorbia viguieri was last modified: May 8th, 2018 by Giuseppe Mazza