This plant is native to South Africa (Western Cape Province), where it grows mainly on coastal rocks and in the cracks of sedimentary rocks.

The name of the genus is the combination of the Greek words “eurys” = vast and “ops” = look, with reference, after some, to the abundant blooming, or, after others, to the size of each flower; the name of the species comes from the Latin verb “pectere” = to comb, with reference to the shape of the leaves.

The Euryops pectinatus (L.) Cass. (1820) is an evergreen, much ramified, 0,7-1,5 m tall and 1 m broad, shrub, with alternate, 5-10 cm long and 4 cm broad, leaves, deeply incised with thin lobes, silvery grey due to the presence of a thin white tomentum covering them. The solitary inflorescences, terminal and axillary, of 2 to 5 cm of diameter, on an about 15 cm long stem, are the typical flower heads of the Asteraceae, formed by a host of sessile flowers spirally inserted on a roundish base, the receptacle, surrounded by an involucre formed by 12 linear, sharp bracts united at the base. 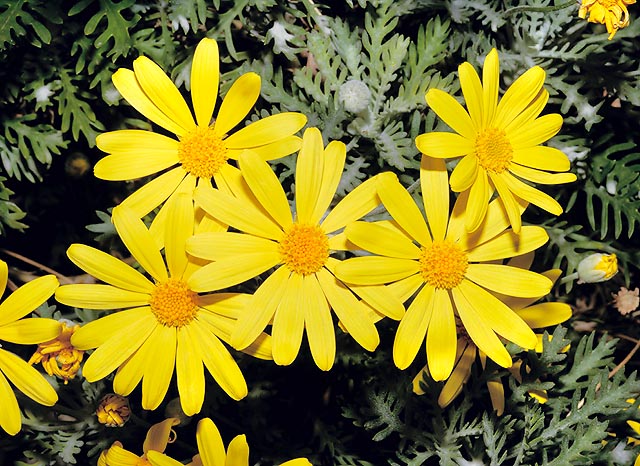 A 1 m shrub, very decorative due to the leaves recalling the ferns, and the long blooming © Giuseppe Mazza

The flowers of the outer ring, called ray florets, on average 13 in number, have the oblanceolate corolla formed by five bright yellow petals, joined together. The ray florets are female, but do have the main function of attracting the attention of the pollinator, like the petals of a single flower do. In side the ring are the bisexual flowers, called disc florets, with tubular corolla with five yellow lobes.

The fruits, containing one seed only and called achenes (or, more properly, cypselae) in the Asteraceae, are thin, about 0,6 cm long, surmounted by the pappus, the modified calyx of the flower, which has the function to help their dispersion, formed by whitish bristles which have the same function. It reproduces by seed, and, very easily, by semi-woody cutting in summer, in sand, agri-perlite or even in water, which will root in 15-20 days.

Plant with very ornamental foliage due to the silvery grey colour and the appearance reminding the ferns, to which is added a brilliant, long-lasting, blooming. Of rapid growth and easy cultivation, it is particularly suitable for the Mediterranean-type climates, ideal for landscape edge, isolated plant or in the rocky gardens; it may bloom almost continuously, if the winters are particularly mild, with a maximum in spring and a short resting time by mid summer; elsewhere, it will concentrate its blooming from spring to late autumn.

A positioning in full sun is indispensable, whilst it is not particularly demanding about the soil, provided the same is well drained; in summer, the watering must be abundant, but well spaced, so that the ground dries up, and once well rooted, it may withstand periods of drought. It is not particularly resistant to the low temperatures, the foliage gets damaged by the -5 °C, whilst the plant, if pruned low and well mulched, may resist to temperatures of a few grades less.

It bears well the pruning, even if the same are drastic, to be regularly performed, when in vegetative rest, in order to keep compact its vegetation. It may be cultivated in pot, for the decoration of balconies, terraces and verandas, in full sun, or, at least, at the maximum possible luminosity, and with addition, if necessary, of sand or agri-perlite to the soil, around the 25%, for improving the drainage; the watering in summer must be more frequent than for the plants growing in the ground. There is also a variety, ‘Viridis’, which has no white tomentum, and therefore, with completely green leaves.