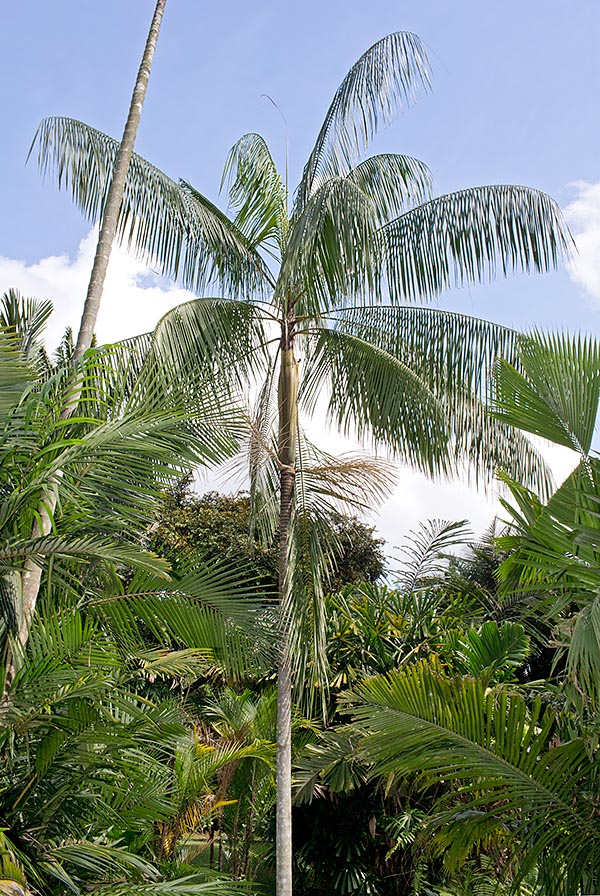 The name of the genus is that of the music Muse in the Greek mythology, formed by the prefix “eu” = well and by the verb “terpo” = to delight, to gladden, name which perfectly adapts to this genus which has species standing among the most elegant of the family of the palms; the name of the species is the Latin adjective “edulis” = edible, comestible, with reference to the fruits and especially to the vegetative apices (“hearts of palm”).

The Euterpe edulis Mart. (1824) is a monoecious species, solitary, rarely cespitous, unarmed, with erect cylindrical stem, up to about 20 m tall and of 15 cm of diameter, of greyish colour, on which are visible the rings trace of the attachment of the fallen leaves, spaced of 7-10 cm, with slightly widened base and a cone of visible reddish roots.

The leaves, on an about 30 cm long petiole, are pinnate, up to 3 m long, with the foliar base wrapping entirely the trunk for a height of about 1 m forming a sort of a tubular capital of dark green colour, often suffused of reddish orange. The folioles, 70-80 per side and arranged close each other along the rachis, are linear with pointed apex, 60-90 cm long and 2-3 cm broad in the median zone, hanging, of glossy pale green colour.

The ramified inflorescences are about 70 cm long, on a short peduncle, enclosed during the initial phase of growth in a deciduous spathe, are arranged under the leaves and carry yellowish flowers of both sexes, arranged in the characteristic triad (a female flower amidst two male ones), in pair or only male in the terminal part.

The numerous fruits are blackish purple globose drupes, of 1-1,3 cm of diameter containing only one globose seed, highly sought after by the wild fauna, in particular birds and mammals, which contribute to the dispersion of the species. It reproduces by seed, which has short-lasting germinability, previously cleaned of the pulp and kept in lukewarm water for three days, in aerated and draining substratum at the temperature of 24-26 °C with rather slow germination, 2-5 months or more; the first leaflet is pinnate. Palm standing among the most ornamental and elegant with relatively fast growth, cultivable in the humid tropical and subtropical climate regions; its cultivation may be tried in the milder warm temperate ones, where it can resist, adult, to temperature values around the 0 °C, provided exceptional and of very short duration. It requires an exposition in full sun or slight shade, in particular when young, and draining soils rich of organic substance, acidic, kept constantly humid. Of great landscape value as single specimen or in groups of various heights in parks and gardens, it is cultivable also in pot for the decoration of open spaces and luminous interiors.

The stem was utilized by the local populations in the buildings and the leaves as cover and, still now, for fabricating handicraft items of common use, but the most utilized and appreciated part is the vegetative apex and the most tender and inner part of the sheathed foliar bases (palmito), consumed raw or more frequently, preserved, which has represented an aliment and an income source almost exclusive to many communities of the Atlantic Forest, but whose collection leads to the death of the plant and which has caused, due to the indiscriminate cutting, its disappearance from many origin zones, as only 400-600 g of produce can be gotten from an adult plant of at least 8-12 years of age.

The production of hearts of palm from the Euterpe edulis in Brazil, which is their main producer, consumer and exporter, is ruled by the federal laws and now, for saving the species, recourse is partially done to the Euterpe oleracea, whose cutting, properly programmed, does not affect its survival, being cespitous, and to cultivated plants of Bactris gasipes, but which furnish a produce of a slightly inferior quality. Furthermore, from the fruits they get a much appreciated juice of agreeable taste, similar to that obtained from those of the Euterpe oleracea (açai) in the Amazonan region.