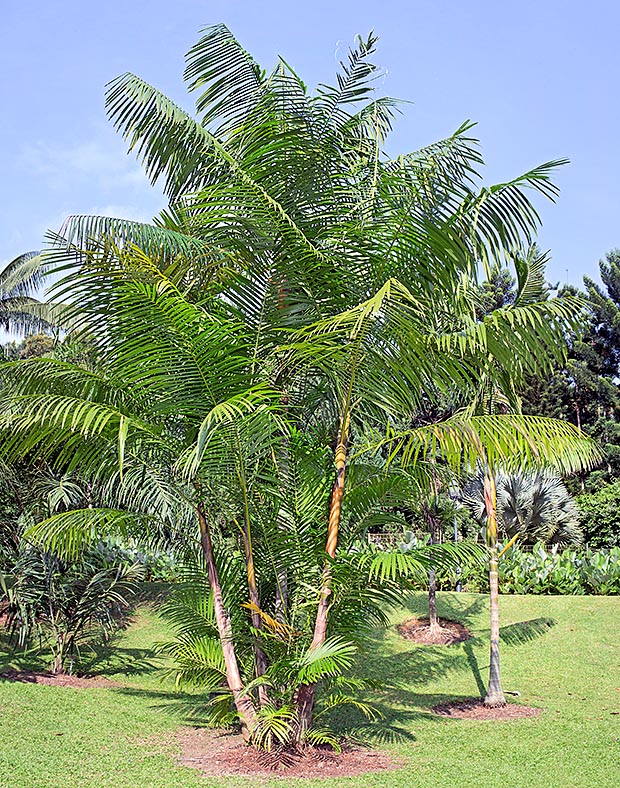 The species is native to Brazil (Acre, Alagoas, Amazonas, Amapá, Bahia, Ceará, Fernando de Noronha, Maranhão, Pará, Paraíba, Pernambuco, Piauí, Rio Grande do Norte, Rondônia, Roraima, Sergipe e Tocantins), Colombia, Ecuador, French Guyana, Guyana, Surinam, Trinidad and Venezuela, where it grows in the swampy forests and in the pluvial ones along the water streams up to about 500 m of altitude.

The name of the genus is the name of the Muse of the music in the Greek mythology, formed by the prefix “eu” = well and the verb “terpo” to delight, to gladden, name which perfectly adapts to this genus which counts species standing among the most elegant in the family of the palms; the name of the species is the Latin adjective “oleraceus, a, um” = similar to vegetables, with reference to the vegetative apices (“hearts of palm”).

The Euterpe oleracea Mart. (1824) is an unarmed, cespitous monoecious species, with cylindrical stems up to 20 m tall and of 7-18 cm of diameter, smooth, greyish, on which are visible the rings trace of the junction of the fallen leaves, with slightly enlarged base and often with a crown of adventitious roots.

The leaves, on an about 30 cm long petiole, are pinnate; up to 3,5 m long, with the foliar base enveloping completely the trunk for an height of 0,8-1,3 m forming a sort of tubular capital of green colour, at times suffused in yellow, red or purple. The pinnules, in number of 50-70 per side and regularly arranged along the rachis, are hanging, up to about 1 m long and 3-4 cm broad in the median part, of glossy green colour.

The about 70 cm long ramified inflorescences, on a 10-15 cm long peduncle, enclosed during the initial phase of growth in a deciduous green spathe, about 1 m long, arrange under the leaves and carry flowers of both sexes, arranged in the characteristic triad (one female flower amidst two male ones), in pair or only male in the terminal part; the male flowers are purple, the female ones are pale brown.

The fruits, numerous and produced for great part of the year, are globose drupes of purple colour, blackish when ripe, of 1,5-2 cm of diameter, containing only one seed. It reproduces by seed, which has a short-lasting germinability, previously cleaned of the pulp and kept in lukewarm water for three days, in aerated and draining substratum at the temperature of 24-26 °C, with germination times of 1-2 months or more; the first leaflet is pinnate and the first flowering, in the optimal conditions of cultivation, starts from the 4th year of age. Particularly diffused species in its origin locations, where often covers vast extensions of territory, cultivable in the tropical and subtropical climate zones with high rainfall, well distributed all over the year, and high temperatures, with minimum ones rarely under the 10 °C, even if, when adult, it can bear temperatures close to 0 °C, provided exceptional and very short lasting. It requires acidic and rich of organic substance soils, constantly humid, as it does not bear periods of dryness.

Since long, the fruits are in important food and economic source of the local populations, the juice (açai), of pleasant taste, nourishing and with outstanding antioxidant properties, is extracted manually or mechanically and is consumed alone or with other fruits, variously diluted in water, or used for ice-creams and cakes or added to the rice and cassava flour; the juice is highly perishable and this limits its commercialization.

Conversely, the seeds are utilized as food for the animals as fuel and for handicrafts products. Besides the fruits, are consumed the vegetative apices and the tenderest and innermost part of the sheathed foliar bases (“hearts of palm”), which causes the death of the stem, but not of the whole plant, being the same cespitous. For such reason, the use of this species, for the local consumptions as well as for the export, in lieu of the Euterpe edulis, with single stem, whose populations have remarkably reduced due to the indiscriminate cutting, is encouraged by the Brazilian authorities. Finally, is not to be neglected the particularly attractive and elegant look of this palm which render it an appreciated ornament of the tropical and subtropical gardens.