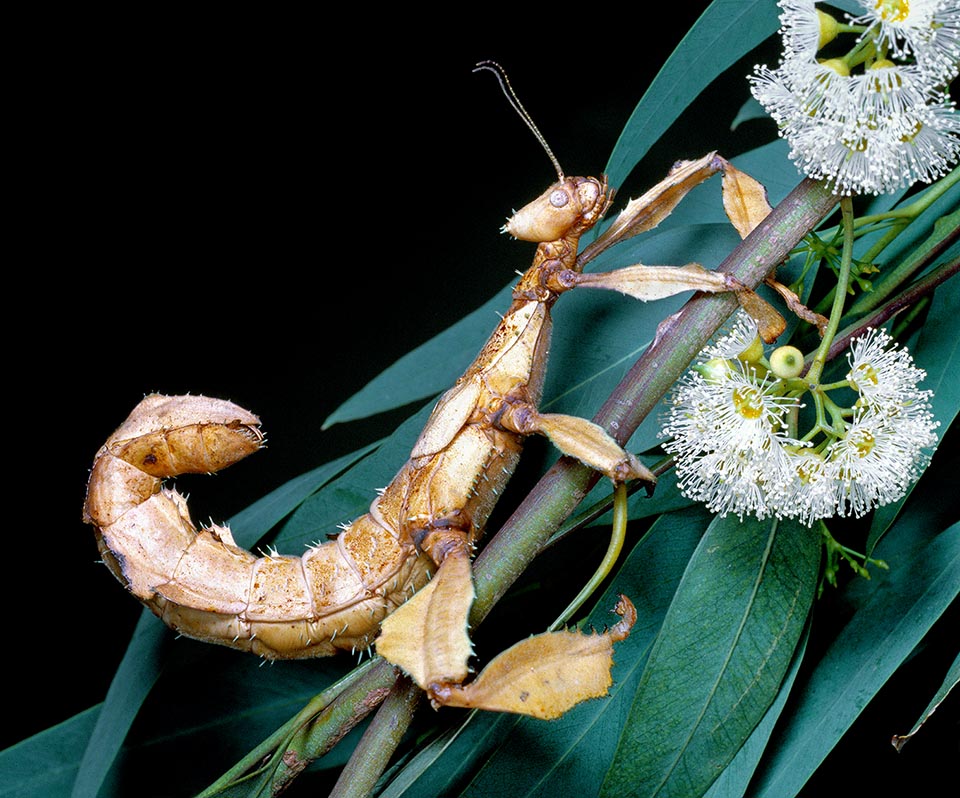 The order Phasmida or Cheleutoptera is diffused especially in the tropical and subtropical regions.It includes species with peculiar morphological and physiological characteristics, such as the thanatosis, that consists in a state of total stillness induced by stimuli of various kinds that cause the contraction of the muscles. Such reflex immobilization has defensive functions.

Another character having the same function is the autotomy that allows the insect to lose a limb, by means of a rapid muscle contraction, if it is caught by a predator. The missing limb is then regenerated during the next moult. 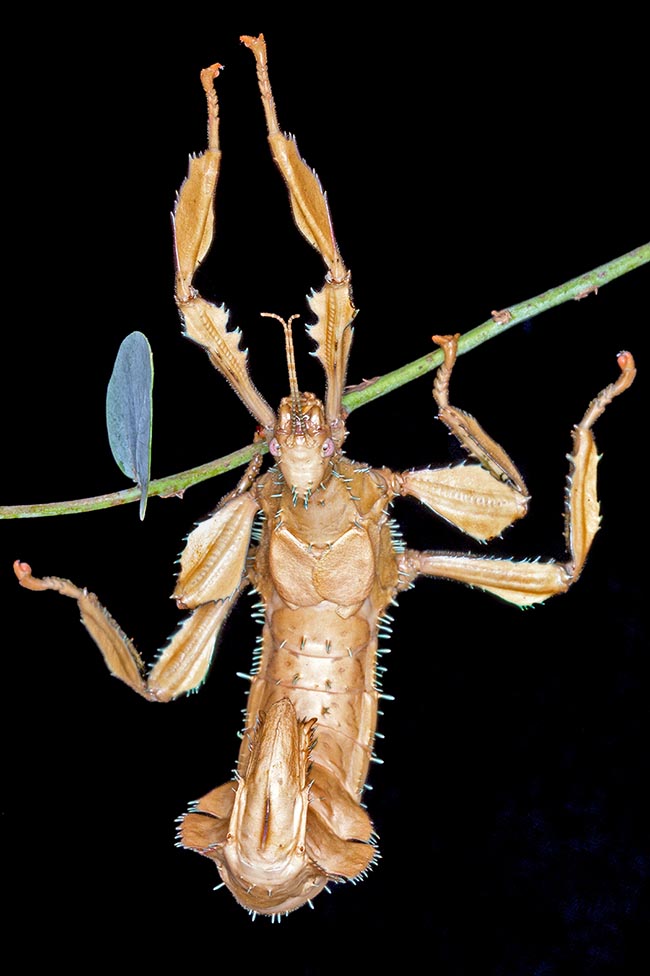 Unlike males, the females have also the body bristling with thorns having a defensive function © Giuseppe Mazza

The order includes more than 3000 species subdivided in three suborders.

In Europe there are present only a few species of the genus Bacillus and the French stick insect Clonopsis gallica of the family Bacillidae afferent to the suborder Verophasmodea.

This, besides the Phasmatidae, includes a dozen families, about ten subfamilies and about one hundred of various genera that include about 2300 species, of which many are very large.

The most known is Phobaeticus chani, which is also deemed to be the longest-lived.

One of the most diffused species is Exatatosoma tiaratum Macleay, 1826, here being dealt.

The generic name Extatosoma refers to the typical position of the body, with the head, the prothorax and the last segments of the abdomen in raised position, from the old Greek ἔχω” (exto), to emerge or to overhang, and “σῶμα” (soma), body.

The specific term tiaratum, with the tiara in Latin, refers to the conical shape of the head that seems to be equipped with a headgear, known as tiara, ancient sign of distinction among many Asian populations.

Exatatosoma tiaratum is native to Australia and to New Guinea.

For the ease with which it can be grown, even in small terraria, it has been diffused all over the world, marketed not only for biological studies but also as an appreciated pet animal.

The eggs and the juvenile forms are on sale in many specialized shops that also furnish the necessary and the breeding instructions.

In the origin areas the species lives on plants of the genus Eucalyptus where the active stages feed on leaves; but it is a polyphagous species and when in captivity it also eats leaves of Rosaceae, especially of the genus Rubus.

Exatatosoma tiaratum is active also during the day, but especially after the sunset. 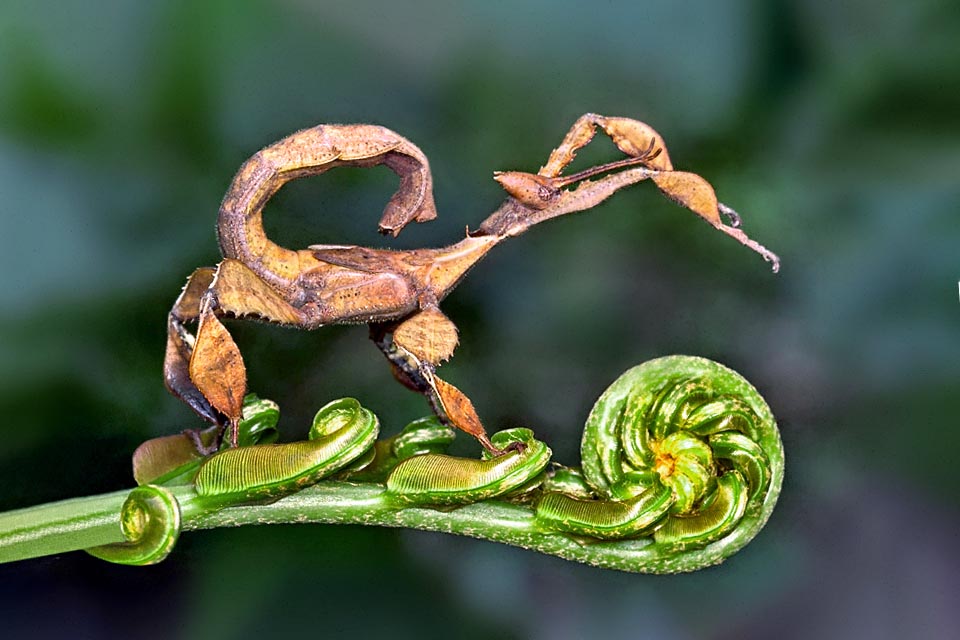 The generic name, from old Greek “over the body”, arises from the fact that in horrific posture the head as well as the tail stand in elevated position © Jiva Sztraka

The colouration of the body of both sexes vary depending on the environment conditions from the reddish brown to green, to yellow and to beige. Some individuals have a very clear colouration, with dark mottlings like those of the lichens.

The change of colour of the insect that renders it like that of the substratum, is called homochromy. It occurs gradually after the destruction and the neoformation of certain pigments under the action done by the variations of the temperature or of the light intensity, as well as of the feeding.

These physico-chemical stimuli act on the endocrine constellation of the individuals determining the formation of the pigments and of the mimetic colouring. 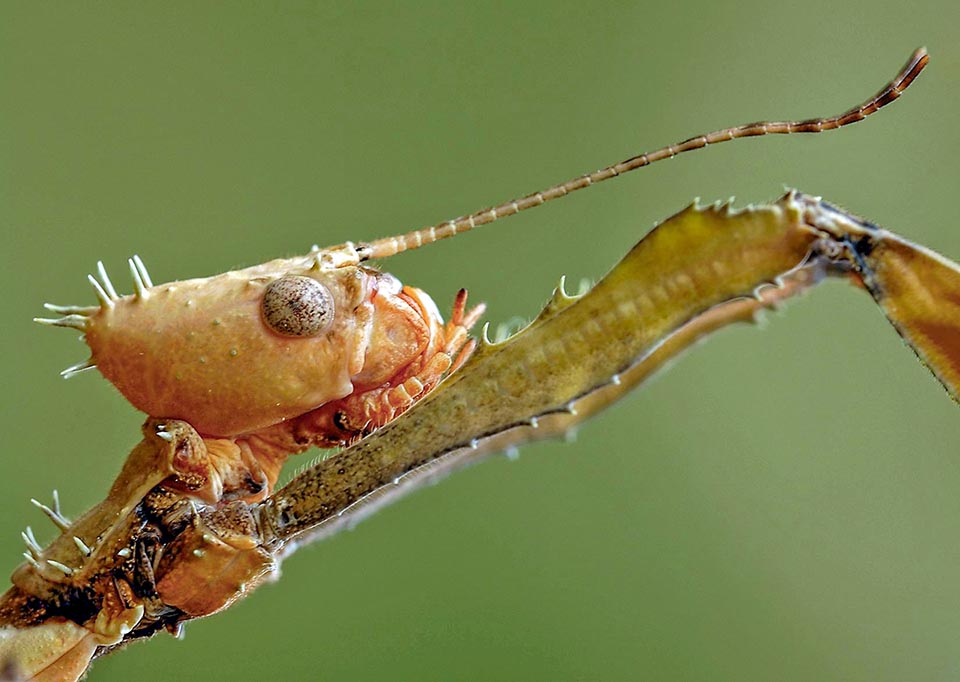 Conversely, the specific term tiaratum, that is “with tiara” refers to the elongated head that seems to wear this old headgear © Ralf Bauer

The two sexes have a remarkable sexual dimorphism. The male body, about 10 cm long, is rather tapered; on the head, besides the masticatory mouthpart and the eyes, are present the antennae, longer than the females’ ones and with a greater number of segments and of sensilla.

These integumental structures are connected with the nervous system and are able to capture and process stimuli of different nature coming from the external environment. Based on the nature of the perceived stimuli, they are distinguished in chemoreceptors, thermoreceptors, hygroreceptors, mechanoreceptors, etc. 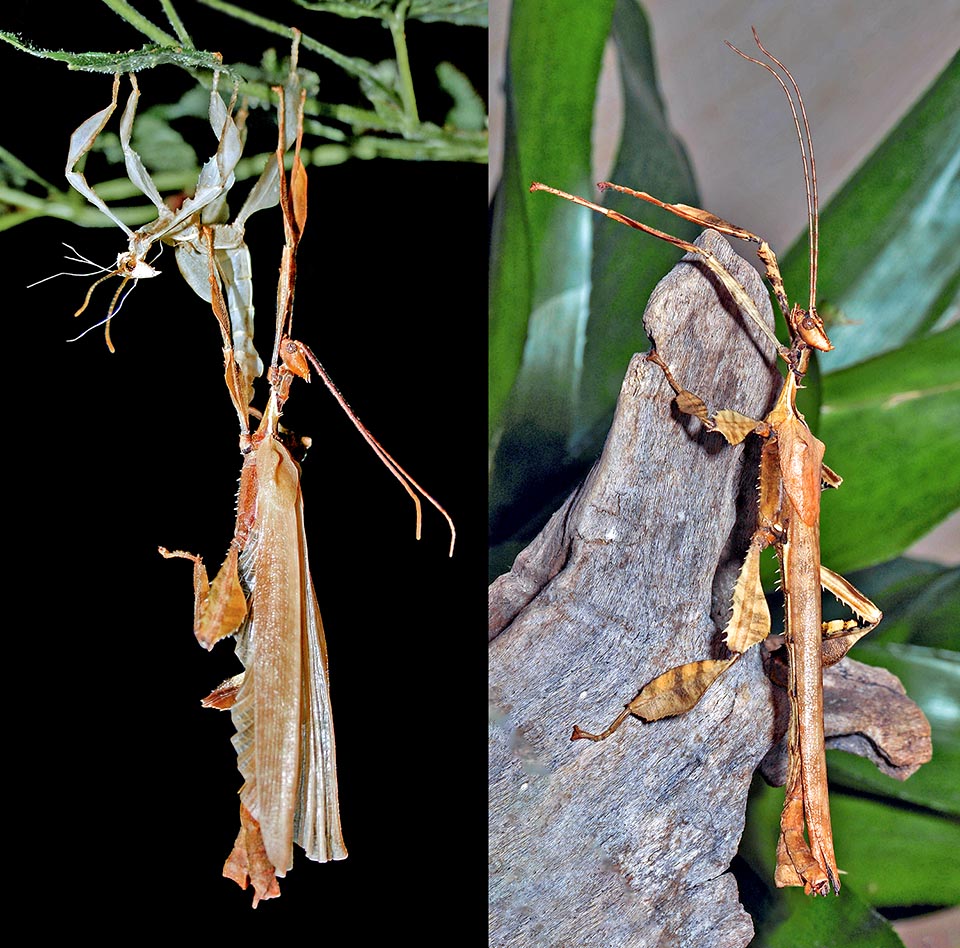 Left, an adult male near the exuvia after the last moult. Right, metamorphosis over, it rests peacefully in the sun with the wings folded. Unlike females, the males are slender with long antennae and big wings to fly away fast in case of danger emitting unpleasant odours. Consequently, the horrific postures and the thorns are of no use © Michael Baun (left) © Pavel Kirillov (right)

The thorax is equipped with developed and functional wings suitable for flying; their shape recalls that of a dried leaf, and such resemblance is emphasized by the presence of integumental expansions on the legs and on the abdomen. In both sexes tibiae are then present organs with hearing function.

The up to 18 cm long female has a massive and stocky body with antennae shorter than those of the male. In the thorax the wings are short (brachypterus forms), the femurs and the tibiae of the legs have characteristic laminar expansions with toothed margins. The abdomen is dilated and furnished with spiniform productions. 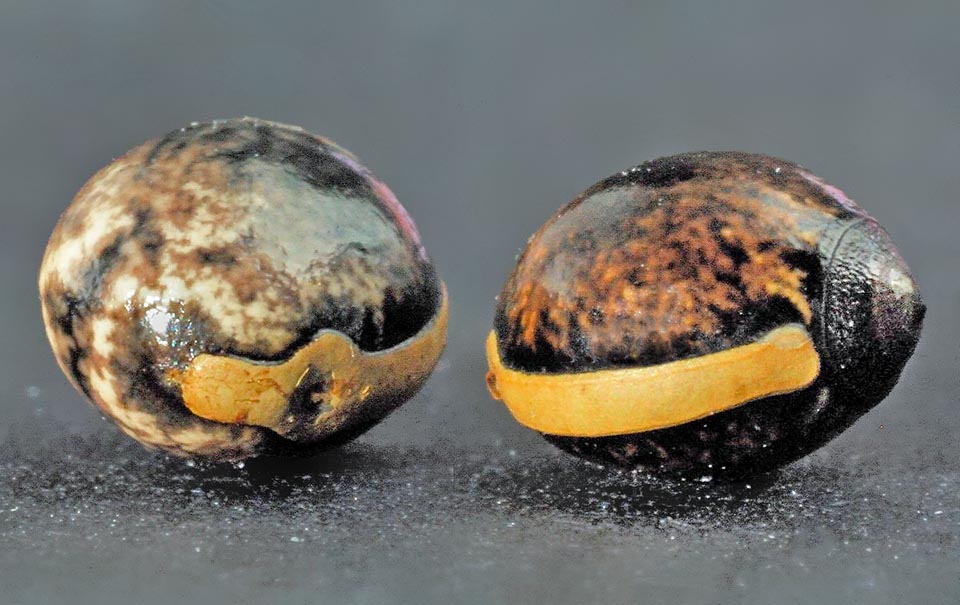 The eggs, with a diametre of about 5 mm, are mistaken by ants of the genus Leptomyrmex for seeds of an acacia and carried as food stock to the nest where they will safely complete their incubation. At first glance newborns are identical to the ants hosting them, and so, camouflaged, will then be able to get out from the anthill without risks © Ralf Bauer

The male does not have spines on the tegument, or other defensive means, therefore, if disturbed, tends to fly away from the predators emitting some substances having an unpleasant odour that have a deterrent power and are called allomones, because favourable only to those who emit them. The females, besides releasing substances with stinging action from the repulsive thoracic glands, actively defend themselves with the legs that have articles equipped with spines.

The eggs, oval, have a diametre of about 5 mm. After the first moult, the neanids of second age, have the body uniformly light brown. Starting from the third age, on the abdomen of the female neanids take the form some spiny protuberances always absent in the male ones. 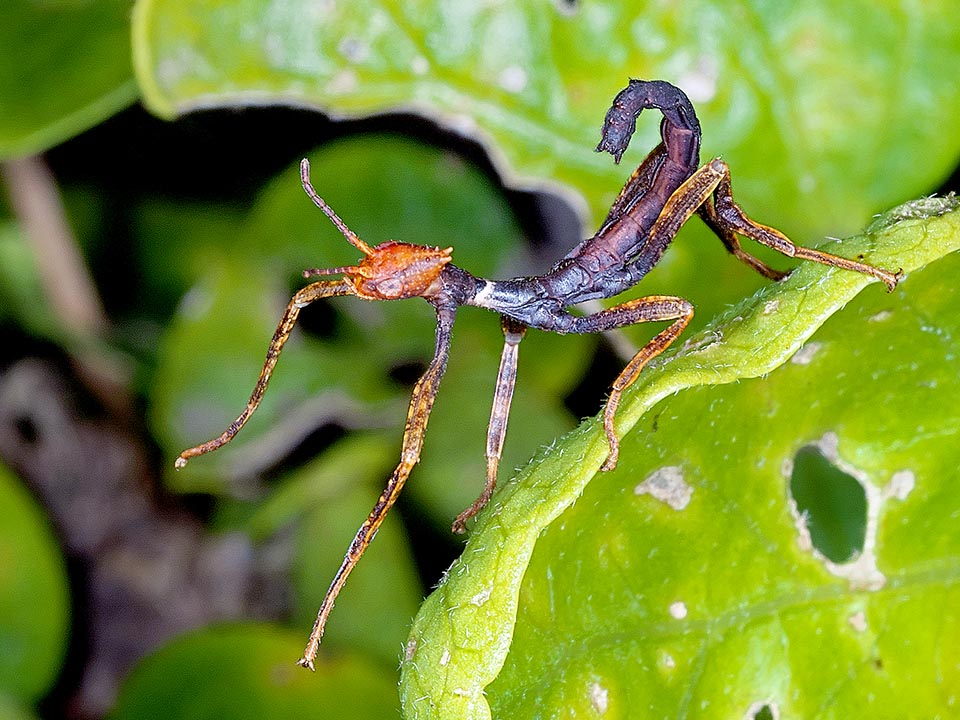 A first age neanid, already showing the typical defensive position of the species. In nursery, if eucalyptus trees are missing, they accept leaves of Rosaceae like brambles © Mike Gordon

Like most Phasmids, the post-embryonic stages are sedentary and active especially after the sunset; during the day they keep anchored to the substratum often swinging to mimic the movement of the leaves. If disturbed, they react by arching the terminal part of the abdomen and raising the forelegs. Often in these cases the aggressors mistake them for scorpions and consequently they desist from attacking them.

The males become adults and can reproduce, after having completed at most five or six moults. They survive about one year during which they fecundate the females emitting spherical spermatophores having a diametre of about half a centimetre. 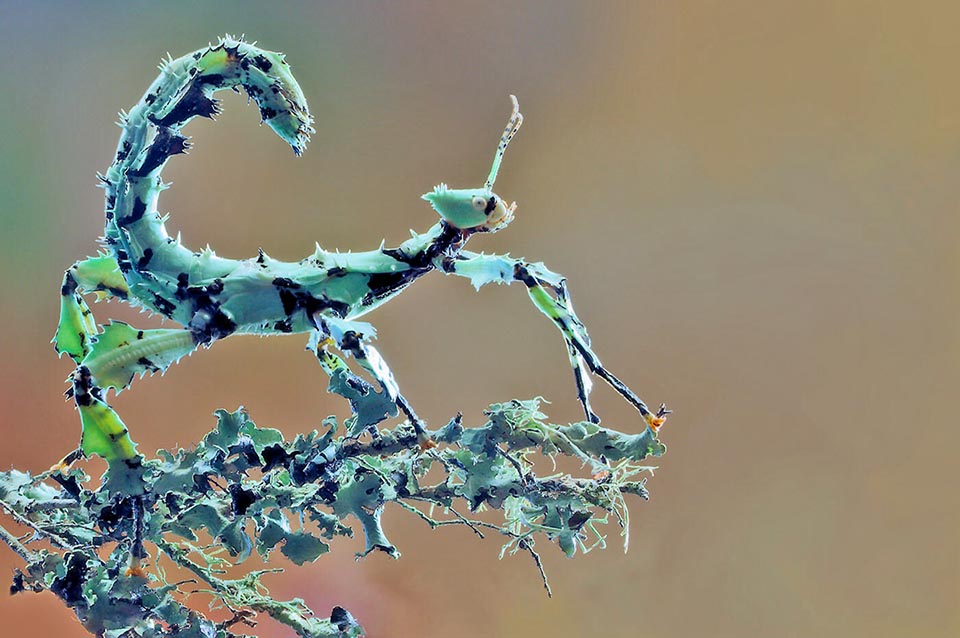 The adult females are little more long-lived than the males and reach maturity about one month after the last of six or seven moults. During their life they lay a total of about 400 eggs.

If fecundated, they lay 3-4 amphigonic eggs per day that hatch after 4 or 5 months of incubation. In absence of males, they lay parthenogenetic eggs from which after 7-8 months come to life only females. This reproduction is called thelytoky.

An important reproductive strategy is linked to the resemblance of the eggs to the seeds of an acacia that ants of the genus Leptomyrmex collect and transport into the nest. Here the eggs complete the embryonic development and the juvenile stages, about 2 mm long, and similar to the host ants, get then out from the anthill undisturbed.