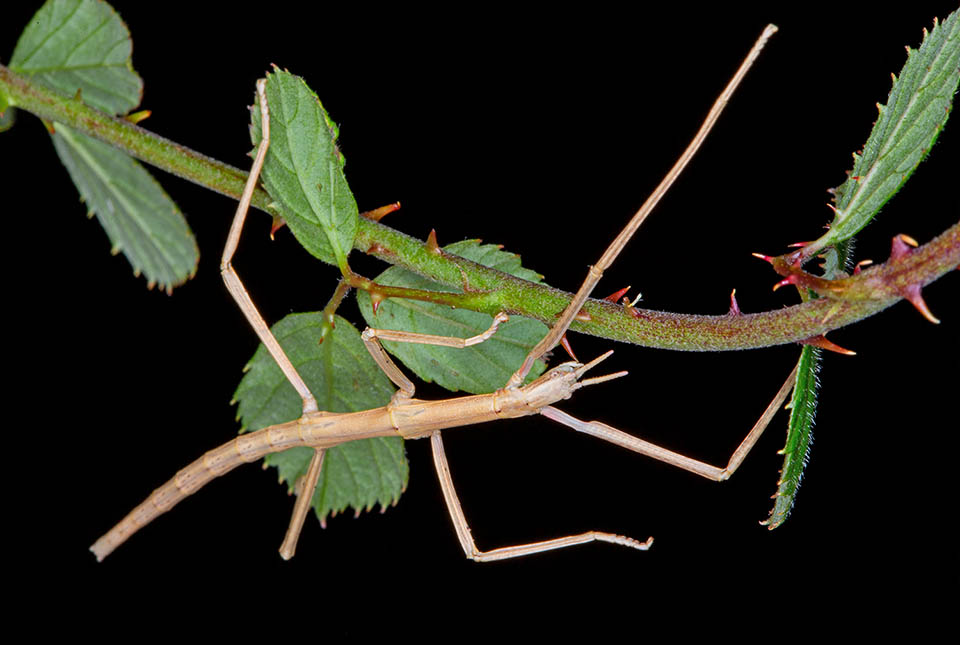 Clonopsis gallica (Charpentier, 1825), in relation with the first description, is commonly known as French stick insect.

The generic name comes from the Greek “clone”, branch, and “opsis”, sight, whilst the specific one refers to the Gaul, old name of the region where have been described the collected specimens.

The insect is afferent to the family Bacillidae of the order Phasmatodea including about 3.000 species, almost all terrestrial, with night costumes, little mobile and often morphologically and chromatically like the vegetal substratum where they live, characteristics that render them hardly identifiable by the human eye and by that of the predators. In other words, they mimetize with the substratum for the colour of the tegument (homochromy) as well as for the shape (homomorphism). 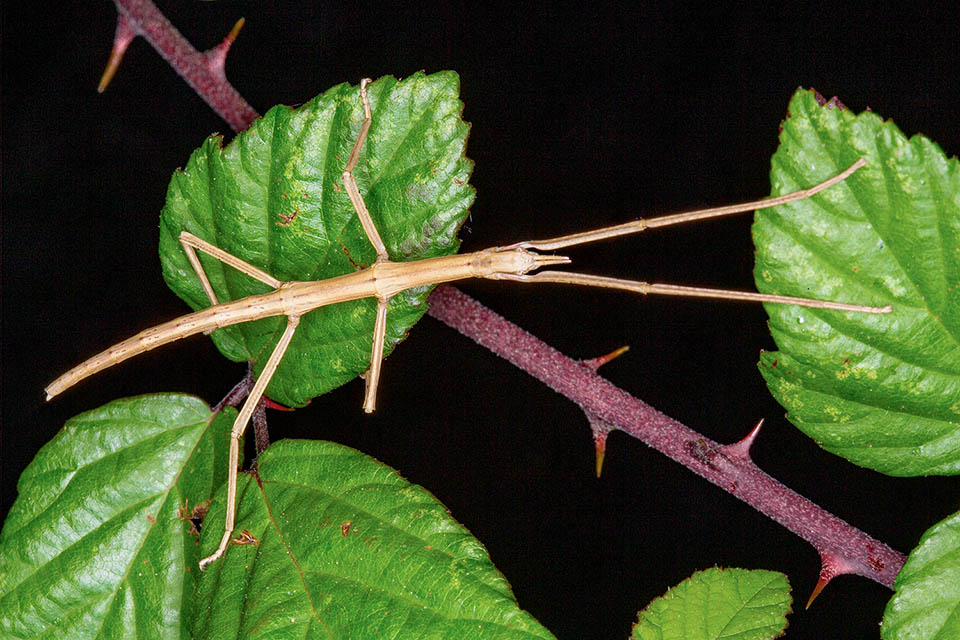 Typical day posture while resting motionless on a bramble. Up to 9 cm long, it may be pale brown or greenish with a paler or pinkish line along the sides © Giuseppe Mazza

The cryptic mimetism concerns also the eggs that are similar to seeds of herbaceous plants. The youth stages (neanids) are also able to detach the limbs, by autotomy, and to regenerate them; totally or in part, during the moults and according to the temperature, humidity and the ambient luminosity, they can change the colour of the tegument.

Of tropical and subtropical origin, they have diffused also in the temperate regions and, for study reasons, they are bred in many insectaria and laboratories around the world.  The body dimensions of the adults vary from about 1 cm to almost 36 cm of Phobaeticus chani, thought to be one of the largest presently extant insects. 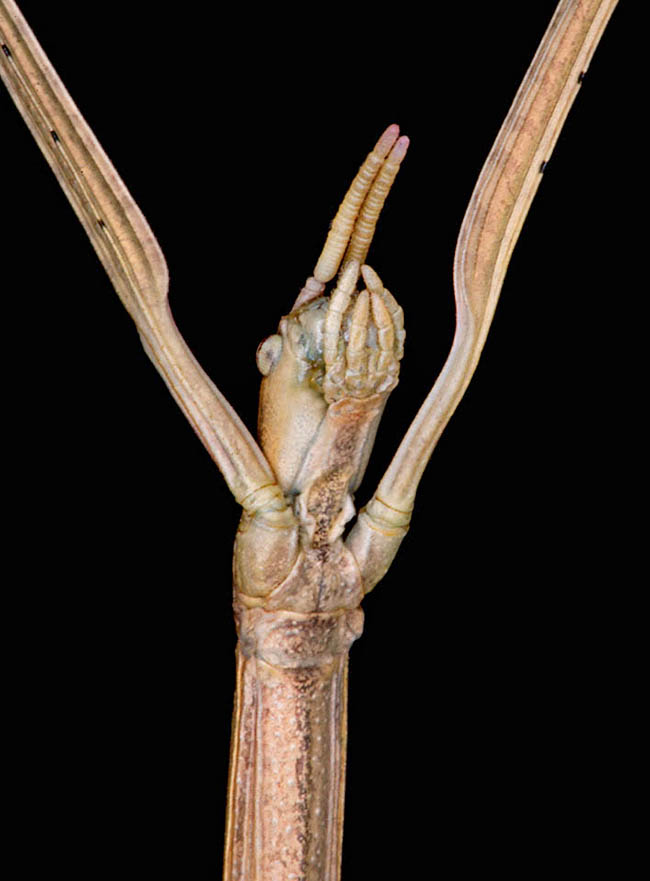 However, the species reaching the maximum size is Phryganistra chinensis that gets to measure 62,4 cm

In the species where males are rare, or absent, the females can lay not fecundated eggs from which, by parthenogenesis, come to life other females.

Depending on their appearance and on their similarity with the plants where they live, the members of the aforementioned families are commonly distinguished in two main morphological types: “leaf insects” and “stick insects”. The best-known species of the first group is Phyllium giganteum, of the Indo-Malay region, that, like other congeners, has a flattened body, with lamellar expansions in the femur, and at times also in the tibia, and that takes on the colour and the appearance of the leaves of the host plants.

The “stick insects”, wingless, that are present in the temperate regions, until ‘600 were considered as the joining link between the animal and plant kingdoms and, also because of their diurnal immobility, were called “xylophyton” (sons of the wood), as it was thought that they were generated by the rotting twigs of Viburnum.

At that time, the scholars Redi and Steno dissected and described the morphology of Clonopsis gallica, in the opus Esperienze intorno alla generazione degli insetti (Experiments on the Generation of Insects), proving that it was an insect.

In Europe, besides Clonopsis gallica, are present some species of the genus Bacillus, morphologically similar to each other, but with a different number of chromosomes in their genome.  The species recently ascribed to the genus Pijnackeria found in Spain and in southern France have a similar appearance.

Clonopsis gallica is present in various areas along the Atlantic coastline of North Africa and of continental Europe: in France, Corsica included; in Italy, including Sicily, Sardinia and many lesser islands; in Portugal, including the Açores and Madeira and in Spain, including Mallorca and Tenerife. It has been reported also in Croatia and in Greece. 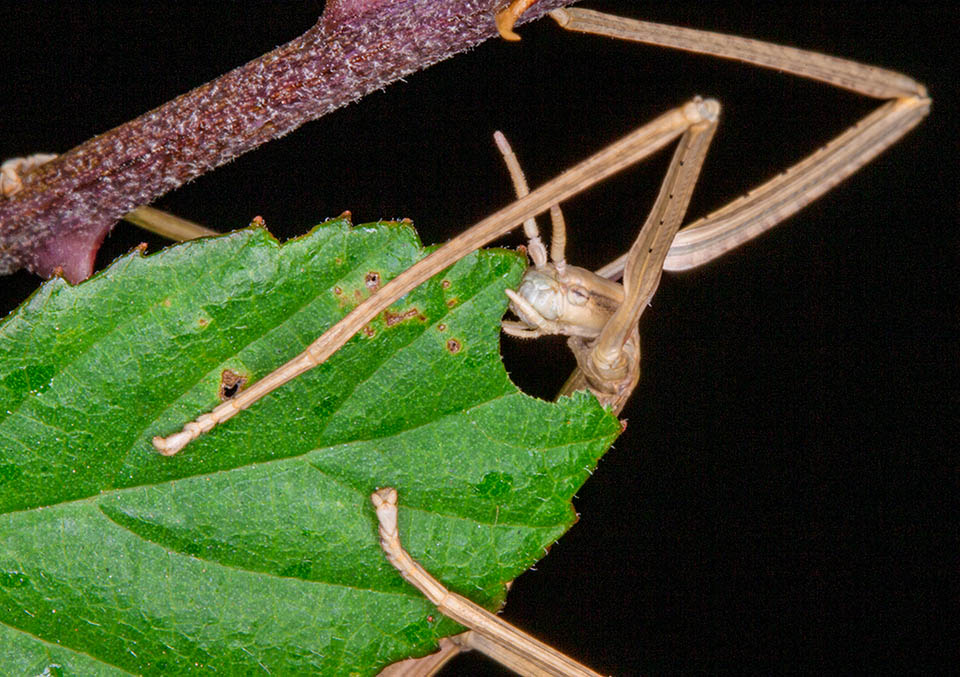 Xerothermic species, it lives in warm environments where it is active mainly in the night hours.

The various biological stages live on various host plants with preference for the Rosaceae and in particular Rubus, Prunus, is less frequent on Anacardiaceae and on Fabaceae.

With their robust chewing mouthparts, the active stages gnaw the leaves without anyway causing any noteworthy defoliation. 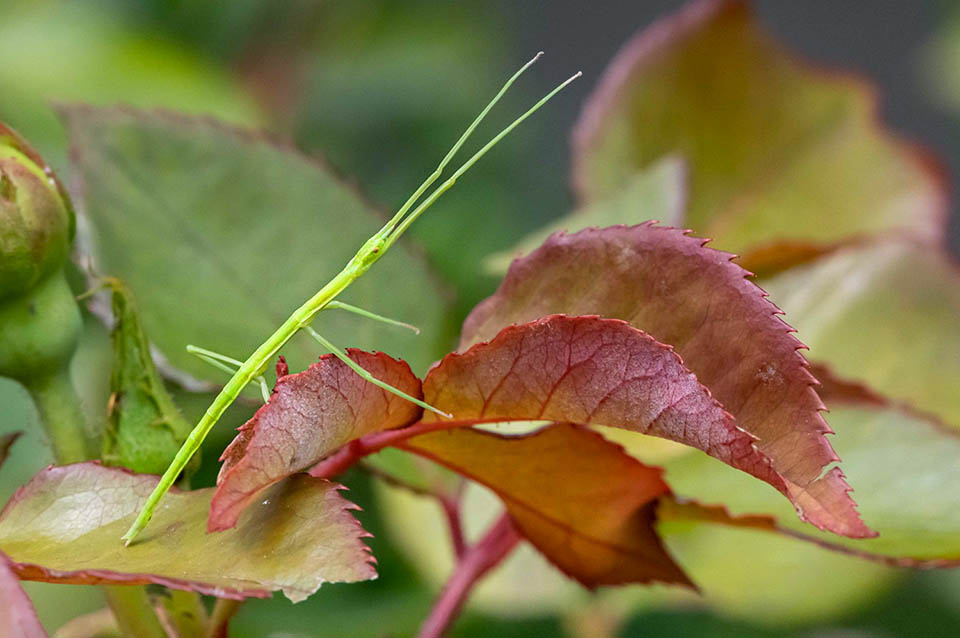 Green Clonopsis gallica among rose leaves. The colour, with obvious mimetic function, forms and stabilizes in youth after the environment where it grows © Guy Magrin

The adult females have a body long up to 9 cm of pale brown or greenish colour with a whitish, or pink, line along the sides. The analysis of the chromosomal heritage or karyotype allows to define the species and the sex of the individuals to which the genoma belongs, as well as the possible alterations in the number and in the structure of the chromosomes.

These analyses have allowed us to ascertain that the specimens, up to 6 cm long, when completely developed, described as males, are actually females with some morphological male characters and consequently are not in condition of fecundating the real females. 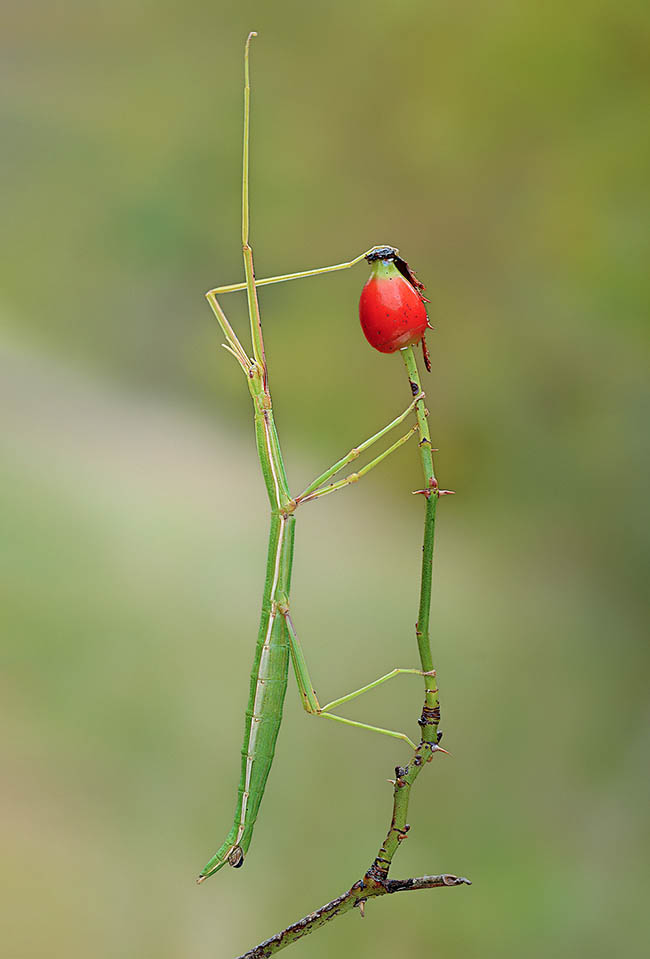 All individuals are secondarily apterous, having lost their wings due to the adaptation to sedentary life.

The body is hypognathous, that is pointing downwards, and has no simple eyes (ocelli), so called because if compared to the compound eyes, they are not innervated by the optic lobes and have only one cornea.

Each one of the three segments forming the thorax have one pair of long and thin legs, suitable for deambulation; the lower keel of the femurs has no spines.

In the anterolateral margin of the first thoracic segment (prothorax) open the repugnant glands whose foul-smelling secretions can be squirted some distance away against possible aggressors.

The abdomen, long and thin, well distinguishable from the thorax, is formed by ten segments (urites), in the last of them are present two short appendages called cerci.

The French stick insect is morphologically similar to the bigger species known as European stick insect (Bacillus rossius), with which it is often mistaken; however, compared to the latter, the antennae are shorter and have a lesser number of articles varying from 10 to 15, not always clearly delimited.

The antennae of the European stick insect are longer than the head and the number of articles may vary from 20 to 25.

The eggs, about 2,5 mm long, are similar to seeds of herbaceous plants and were considered as such up to the observations made by Redi and Steno.

The outer case of the egg, called chorion, is of brown colour with wrinkled decorations and one operculum at the anterior pole.

The youth stages, similar to the adults, have the body of shape progressively increasing from 1,5 cm when just shelled, up to the about 5,5 cm of the last juvenile age.

The female defends from the intruders the part of cyme it nourishes of, like other territorial insects, like the well-known Stag beetle (Lucanus cervus). 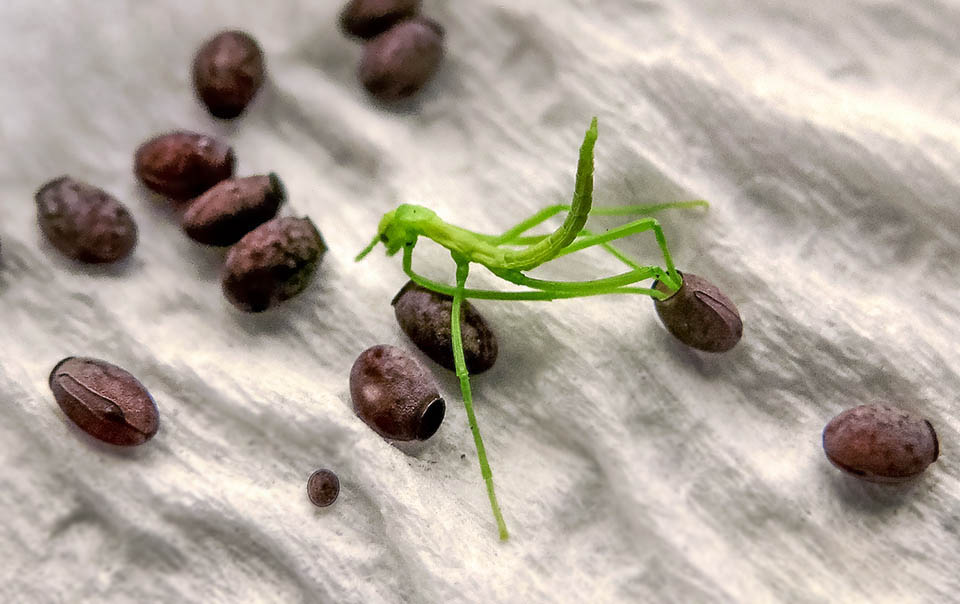 A neanid while hatching from the egg. Until 1600, these species were mistaken for seeds and the stick insects were deemed to be the link between animals and plants © Nacho Delgado Ferreiro

In this site, keeping motionless, it drops to the ground about hundred eggs of which a percentage varying from 30 to 80% hatches in the same year of deposition whilst the remainder will hatch in the following one.

Depending on the microclimatic conditions the species may perform one or two annual generations.

The reproduction takes place by thelytokous parthenogenesis, that is producing female offspring. This does not always make applicable and verifiable the classical concept of species, intended as a group of individuals able to mate with each other and to generate interfertile progeny and, consequently, the individuation is based on morphological and genetic criteria. The adult stage is achieved after that the individuals, shelled from the egg, called neanids, make five moults with a progressive increase of their body size. 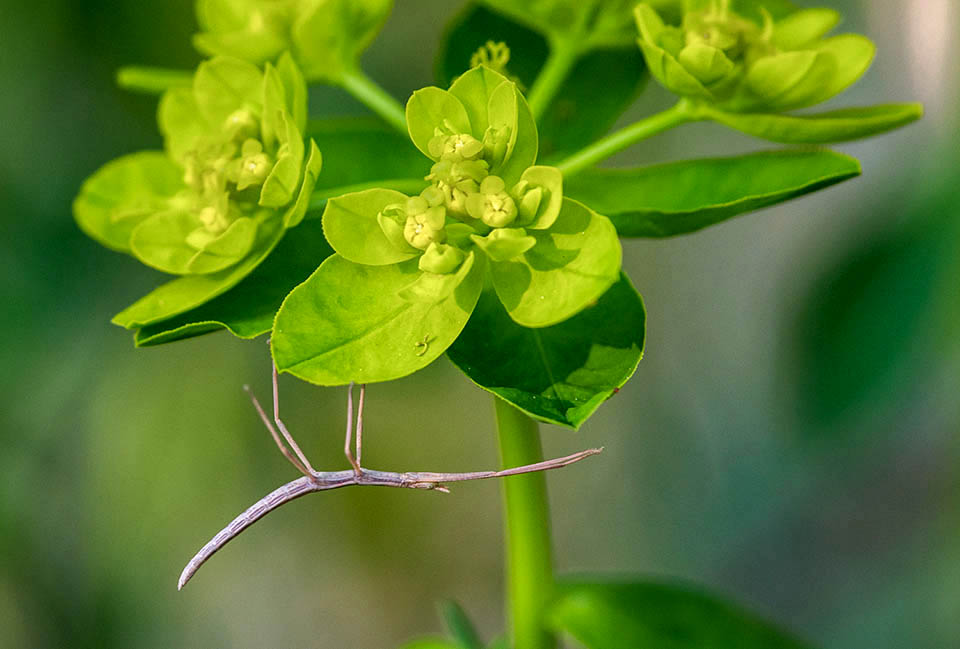 Juvenile form on a Euphorbia. True males don’t exist, and the reproduction occurs by parthenogenesis. That is, females lay eggs without being fecundated © Romain Baghi

Such type of development, similar to that of the wingless primitive hexapods, called ametabolic, is named pseudoametabolia because the adults, ancestrally equipped with wings, have lost them during their evolution and are similar to the juvenile stages.

Various predators, Rodents, Birds, Mantises, manage to catch the young stages as well as the adults that camouflage themselves staying motionless on the plants.