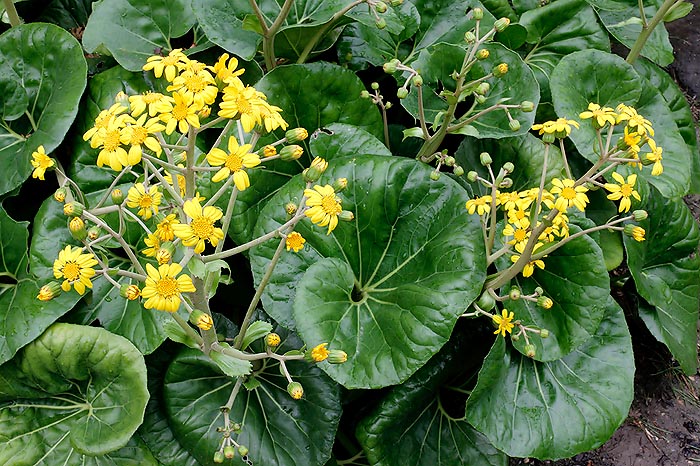 The plant is native to China (Fuj- ian, Guangdong, Guangxi, Hubei and Hunan), Japan (Honshu, Kyushu, Ryukyu Islands, and Shikoku), Korea and Taiwan, where it mainly grows in coastal rocky slopes and along the banks of the rivers.

The name of the genus comes from the Latin “far” = spelt, flour and “fugio” = to run away, to disappear, with reference to the white pruinosity on the petiole and the floral stem which disappears precociously.

The name of the species “japonicum” = of Japan, refers to one of its origin countries.

The Farfugium japonicum (L.) Kitam. (1939), is an evergreen, herbaceous and cespitose plant, acaulous, rhizomatous, 30-45 cm tall and about 60 cm broad; with big and showy leaves on an erect petiole, 10-35 cm long, initially covered by a slight white tomentum which then becomes glabrous. The leaves, of 20-30 cm of diameter, are coriaceous, circular, heart or kidney-shaped, of a glossy dark green colour and curved, smooth or indented, margins and clear nervations departing from the centre of the leaf. 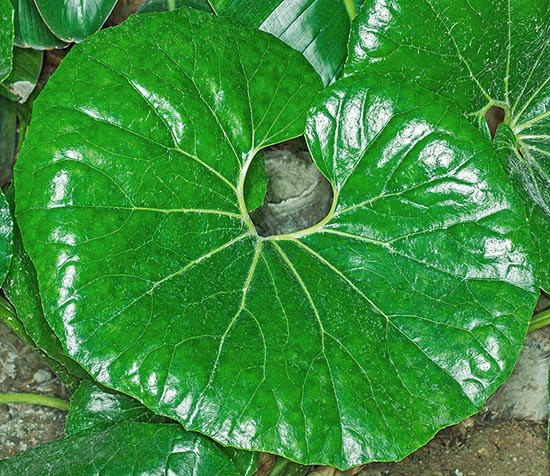 The 30 to 70 cm tall inflorescences have a compound flower head, which means that they are formed by a main axis with several ramifications ending in a flower head, the typical inflorescence of the Asteraceae, formed by a host of sessile flowers spirally inserted on a roundish base, the receptacle, surrounded by an about 1,5 cm tall and with a diameter of 2 cm, tubular involucre, formed by a series of oblong, pointed, green bracts. The flowers of the outer ring, called ray florets, in number of 8-13, have an oblong or almost elliptic corolla, long 1,5-2,2 cm and 0,5 cm broad, formed by five petals joined together, of a yellow colour. The ray florets are female, but have mainly the function of attracting the attention of the pollinator, like the petals of a single flower do. Inside the ring are the bisexual flowers, called disc florets, with a five-lobed, yellow and about 1 cm long, tubular corolla.

The fruits, containing one seed only and called achenes (or, more properly, cypselae) in the Asteraceae, are cylindrical, 0,6 cm long and surmounted by the pappus, the modified calyx of the flower, formed by a crown of about 1 cm long bristles, which has the function to help their dispersion. It reproduces in spring by seed, or, very easily, by division.

Plant mostly cultivated for its great glossy leaves and, in the numerous varieties, for the white and yellow streaks and mottles, of which the most famous is the ‘Aureomaculata’, which earned it the name of “leopard plant”. It very well adapts to filtered or dimmed light situations, as it does not stand the direct sun, except for a few hours, it may be therefore advantageously utilized as ground cover or as edge under the trees; it has a quite good resistance to the marine aerosols, and therefore it can be employed in areas close to the sea side. It prefers humid, light and draining, soils, provided enriched by organic substance; it resists well to the low temperatures, the leaves may resist up to about -6 °C, the plant to -16 °C, or even to -20 °C, with a good mulching. It also adapts to the cultivation in pot, with the same aforementioned modalities. 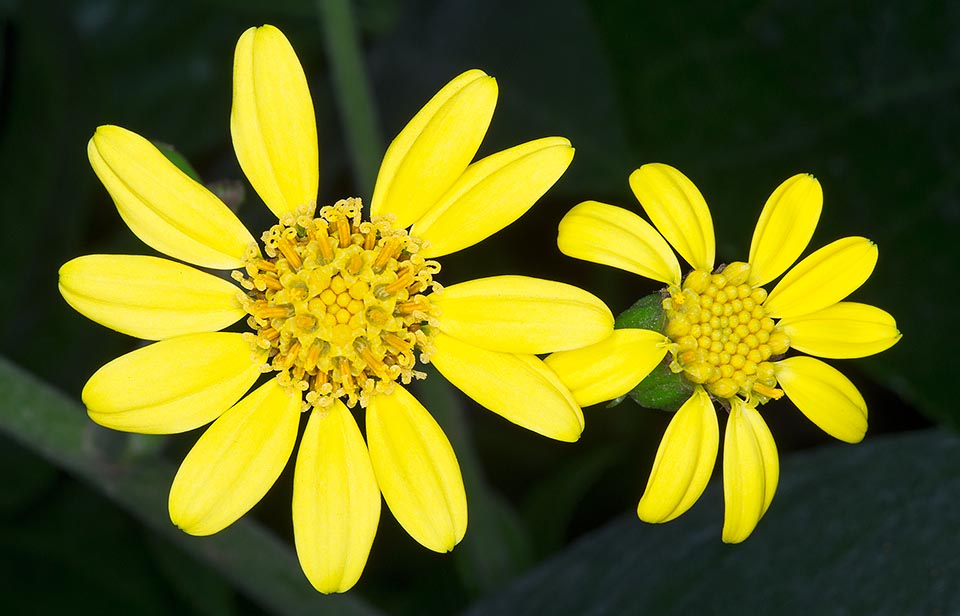 It is subject to few diseases and moderately to mites and cochineals; snails and slugs may create problems disfiguring the leaves.