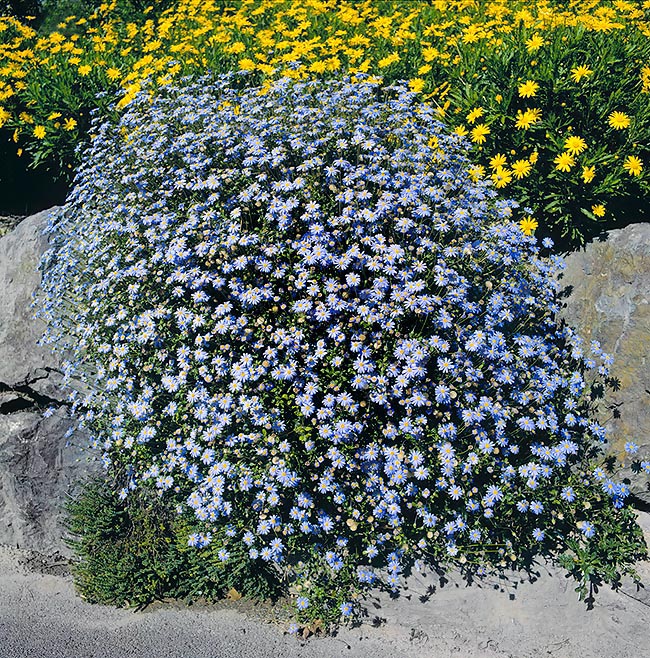 A perennial, 1 m tall, herbaceous, which with the time tends to become arbustive © Giuseppe Mazza

This plant is native to South Africa (Western and Eastern Cape provinces), where it lives on the coastal dunes, rocky, stony and sandy plains and rocky slopes up to about 1.000 m of altitude.

The exact derivation of the name of the genus is not known, after some it comes from the Latin “felix” = happy, gay, with reference to its gay blooming, after others, from the name Felix, a not better identified German officer or from the name of the Italian physicist and mathematician Fortunato Bartolomeo de Felice (1723-1789); also the exact origin of the species name is unsure, after some, it refers to the resemblance with another Euro-Asian species belonging to the genus, the Aster amellus, after others, it refers, due to the shape of the leaves, to the species of the South-African genus Amellus.

The Felicia amelloides (L.) Voss (1894) is a perennial and evergreen herbaceous plant which forms rapidly thick tufts, from 0,6 to about 1 m tall and broad, and which, time passing, tends to become semi-arbustive. It has green stems, at times with reddish shades, rough to the touch due to the presence of short rigid hairs; the sessile leaves (without petiole), are thick, oblong, ovate or elliptic, 3-4 cm long and 1-1,5 cm broad, have a dark green colour and are as rough to the touch as the stems. The flowers, on an about 15 cm long peduncle, are the typical flower heads of the Asteraceae, formed by a crowd of sessile flowers spirally inserted on a roundish base, the receptacle, surrounded by a cylindrical involucre formed by a double series of imbricate bracts with sharp apices, of green colour.

The flowers of the peripheral ring, about twelve, called ray florets, have the corolla formed by five petals merged together, about 1,8 cm long and 0,4 broad, usually of a sky-blue colour, but may have various gradations going from the pale azure to the dark blue; there are also pink, mauve and white varieties. The ray florets are female and have also the function of attracting the attention of the pollinator, like the petals of a single flower. Inside the ring, we find the bisexual flowers, called disc florets, with tubular corolla and five short yellow lobes. The fruits, containing one seed only and called achenes in the Asteraceae, are obovoid, flattened, hairy, of brown colour and surmounted by the pappus, the modified calyx of the flower, formed by a crown of whitish hairs, having the function to facilitate its dispersion. 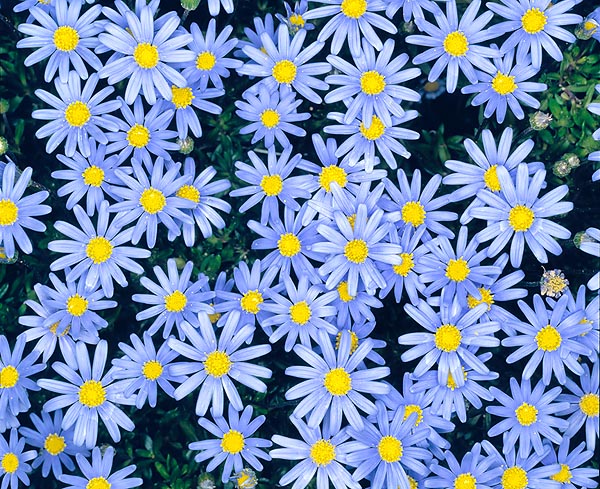 The flowers of the Felicia amelloides remind the Aster amellus, hence the name © Giuseppe Mazza

It easily reproduces either by seed, which germinates quickly (in about one week), or by apical cutting in springtime.

It is by far the most cultivated plant of the genus, and this with full merit, due to the great quantity of sky-blue erect flowers, surely uncommon, contrasting with the bright yellow colour of the centre, to which we have to add the speed of growth, the compact standing, the resistance to the dryness and the adaptability to whatever sort of soil, even if the contribution of organic substance and sand, in the compact grounds, helps in getting a more exuberant growth.

Requirements are the exposition in full sun, seen that the flowers do not open in the shade, and an optimal drainage, being quite susceptible of radical rottenness when in presence of stagnant dampness.

It is not much resistant to the low temperatures and dies at around the -4/-5 °C, but this is not a limitation thanks to its fast growth, it is in fact amply cultivated as annual also in locations where the climate does not allow its survival in winter, and often it germinates again in spring as it easily auto-disseminates.

Ideal for rocky gardens, colour spots, and edges, it has an abundant spring flowering, followed by a short resting period in the warm summers climates; in fact, it needs cool nights for blooming, then starts gain till late autumn and goes on also in winter in the particularly mild climates; the removal of the dried flowers contributes to stimulate the flowering. It bears pruning, even drastic, which is better to be effected by the end of each winter, for the plants behaving as perennial, for keeping compact the tufts.

Watering must be regular in summer, but leaving the upper layer of the ground to dry up well, as an excess of water, in addition to the risk of rottenness, may cause an elongation of the stems thus giving the plant a messy look; in winter they are usually not necessary, but, spaced, when in the dry winter climates. Finally, it is also an excellent pot and cages plant, even if hanging, to be placed either outside or in the winter gardens and behind the windows, when the climate doesn’t allow the permanence outside, facing south in order to get the maximum possible of sun and with temperatures never below the +10 °C. The soils must be rich of organic substance with addition of sand or agri-perlite in order to improve its drainage.