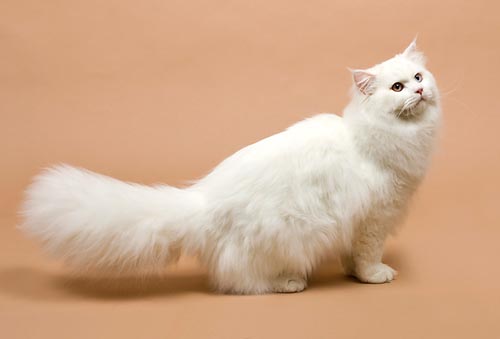 The British Longhair gives an overall impression of power and sweetness © G. Mazza

The British is a breed of cats native to Great Britain. It has come from the common English cat, descendant from the cats which accompanied the Romans during their conquest and occupation of the British Isles. This was the first breed of short hair cats recognized in England in the XIX century and was exposed at the Crystal Palace in 1871. It has maintained the robustness and the solidity from its past as a feral cat. It exists in several colours. Its character, full of sweetness confirms the promises of its look full of roundness. It exists also in long hair variety.

The British is a medium to big sized cat, robust and powerful, well-rounded built. Its round, apple-shaped head has a sweet and open expression, increased by the big eyes. Its round and short muzzle, its strong neck line, its powerful body with its very broad and round shoulders and hips, render it an imposing cat. It spreads a general impression of strength and of sweetness.

The head is broad with well rounded contours whatever the angle under which we look at it is. The cheeks are full. The skull is rounded, descending with a slightly concave curve. The nose is short and wide. A slight stop is admitted. The adult males have powerful jowls. Seen both from face and from the profile, the muzzle is inscribed in a well defined circle with firm and full whisker pads. The nose and its contour are straight. The tip of the nose is placed on the alignment of the chin, which is well firm. Round, great and well open, the eyes are well spaced between them, thus accentuating even more the width of the nose. The colour must be uniform and in accordance with that of the mantle. The most intense and most brilliant tonalities are the preferred ones. 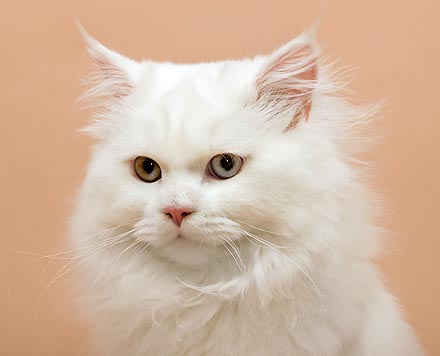 The coat is semi-long, silky and with a thick down-hair © Giuseppe Mazza

Thick at the base, the tail measures about the two thirds of the body. It almost keeps the same thickness, from the base to the rounded tip. In the British longhair, the tail must be abundant and in panache.

British Shorthair : the fur is short, thick, firm and erect so much to open on the neckline when the cat turns its head. It may be compared to the hair of a woollen carpet. The fur has a thick down-hair and gives the impression of a good natural protection.

British Longhair : the fur is semi-long, silky, with a thick down-hair. The collar and the back are well abundant.

All colours are recognized.