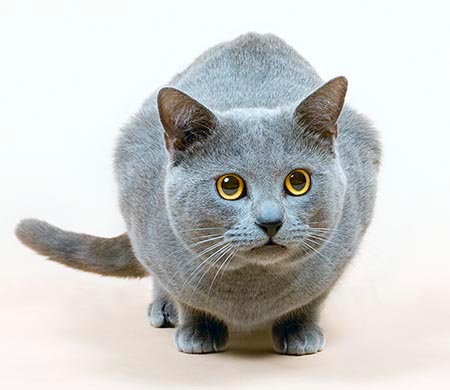 The Chartreux, also called cats of the Carthusians, is a breed of short hair cats native to France. They narrate that it is coming from Turkey or Iran and that it reached the west at the time of the crusades.

The Chartreux gets its name from the legend after which it lived in the monasteries of the Carthusian monks where it hunted the rats in those times when the bubonic plague was devastating Europe. The feline should have then shared the monks’ vow of silence. That is why even now this cat mews very little. It was utilized by the furriers due to its thick and rather woolly fur.

It has been accurately described by Buffon in the XVIII century.

The Chartreux is a robust cat with an entirely blue short hair with copper or orange eyes. It’s a solid cat where the chubby cheeks round the face so much to give the impression that it’s starting to smile. It is esteemed for its hunting abilities and for its uncommon intelligence. It is flexible and agile and we can find in it the behaviour qualities which have permitted to this cat to survive in at times difficult conditions.

The Chartreux has inherited the independent character from the true felines. It is playful, sociable and joyous; it has a cat-dog temper and adores to follow its master from a room to another. It represents the French feline breed par excellence. It was the cat of Joachim du Bellay, who wrote a wonderful poem in memory of his cat Belaud. It was also the companion of Charles de Gaulle and of Colette.

Trapezoid, with the lower base bigger than the upper one, the head is broad with rounded contours. The cheeks are full and well developed, especially in the more than 2 years old males. The profile is slightly concave at the level of the eyes with a high and flat front between the ears. The nose is straight, wide and moderately long. Even if not pointed, the muzzle is fairly narrow if compared with the whole of the head, with developed whisker pads. The chin is firm. 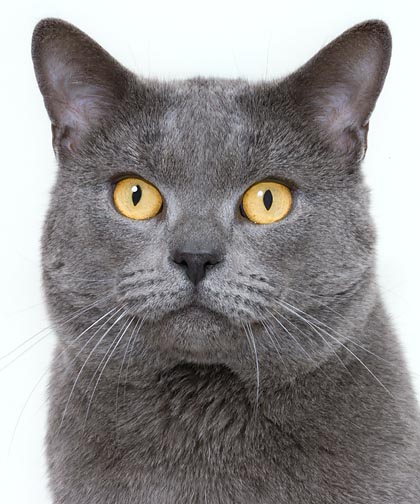 Big and expressive, the eyes are well open with their external corners slightly raised upwards and moderately spaced. Their colour goes from the yellow to the orange.

Narrow at the base, slightly rounded and of medium size, the ears are placed high on the head.

Strong, thick and short, the neckline is well muscled.

Of semi-cobby format, the body is robust with broad shoulders and a deep chest. It has a medium length with a strong bony structure and a thick and powerful musculature. The females are remarkably lighter, even if they keep a robust look.

Of medium length, the paws have a strong framework and an effectual musculature, particularly developed in the males. The broad feet are slightly oval.

Of average length, the tail is thick at the base and then gets pointed. It is soft, fairly short, with a thick fur, rather woolly and raised, almost seemingly waterproof. Down hair is abundant.

All blue-grey tones, from pale blue-grey to pronounced blue-grey, are accepted, provided they are uniform from the beginning of the single hair up to its extremity. The truffle is slate-grey, lips and pads are blue. Ghost tabby marks are tolerated in the less than one year old kittens.