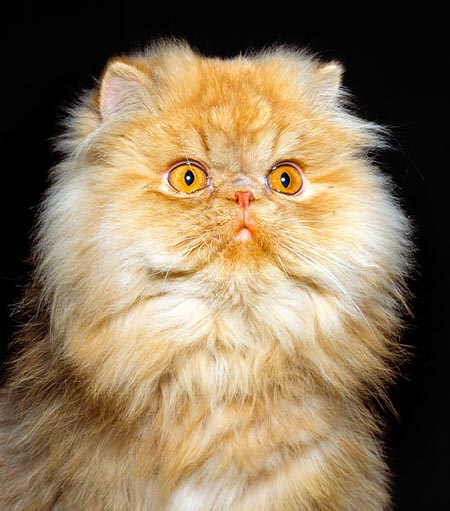 During the sixteenth century, the European aristocracy has become fond of the Turkish Angora, new cat come from Middle East, whose fur and character had conquered the hearts.

It is in this same epoch that the cat began to assume its place as pleasure animal, abandoning the courtyards for the halls of the villas.

During the nineteenth century, the English crossed the Turkish Angora with the British, which had a very attractive rounded face. It is in this way that the Persian came to life, a new breed with a name reminding the middle-eastern origins. It was presented close to the British on occasion of the first feline exposition at Crystal Palace on 1871.

The Persian became soon very familiar, so much to get the Turkish Angora forgotten for long decennia. The popularity of the breed quickly conquered the USA which went on in the work of selection the English had started. The Americans went further ahead, rounding more the Persian and pushing to the extreme its flat-faced appearance.

Since then, the work of the breeders has permitted to create the various colours which now are admitted.

The Exotic Shorthair came to life in USA during the fifties. At the beginning, it was just matter to ameliorate the American Shorthair giving it the rounded face of the Persian. The outcome was the short hair version of the Persian.

The Persian and the Exotic Shorthair are calm cats, easy to handle, home-loving. At times, they are qualified as plush. However, between the siesta times, it shows also the character of an authentic feline, explorer, of a very good hunter and a good tree-climber, capable to defend its own territory from the intruders.

The fur of the Persian requires a regular grooming for evidencing its beauty and for avoiding that the hair entangle. This regular grooming and its rounded face render this cat an ideal companion for compensate the lacks of affection. 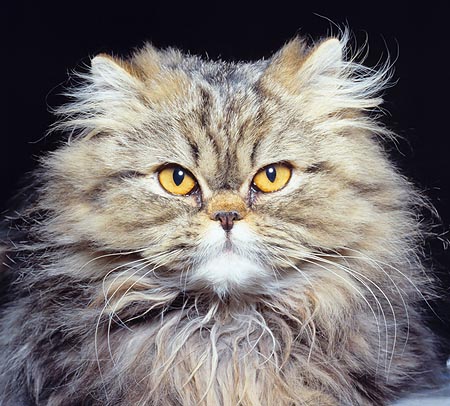 When we see a Persian being exposed, it’s a real ball of fluffy hair framing a round face. Such a result can be obtained only with a very regular grooming and an intensive preparation just before the exposition (shampooing, drying up, dressing, etc.). When we wander over the corridors of an exposition it is not rare to see the breeder turning his Persian in all the directions for getting its hair puffed. The highest places of the podiumrepresent several hours of preparation work.

The Exotic Shorthair has inherited the character from the Persian. Its short hair fur requires much less grooming. Part of its character is connected to its colour.

Round and massive, the head shows a wide skull forming a dome. The face is round with a sweet expression and a well rounded bone framework. The cheeks are wide and powerful, with prominent and full cheek-bones. From the side, the nose and the chin are aligned on a same vertical plane. The nose is wide and very short, with sufficiently open nostrils so that the breathing is not disturbed. The stop, well marked and deep, must be placed between the eyes, ideally in the middle, never higher than the upper line of the eyes and never lower than the inferior line.

The muzzle must be round, wide and full, evidence of a perfect occlusion of the mandibles. The chin is strong. The eyes are rounded, big and well spaced between them; the eyes have a sweet look. The colour, which is very intense, must be in accordance with that of the mantle.

The ears are almost round, not too open at the base, small and well spaced one from the other, placed in way to respect the round of the head. The Persian’s interior of the ears is well bushy. The neck is thick, massive and short, the head seems to be built in the shoulders.

The body is cobby and massive, with rounded shoulders and hips with the same width. The back is right. The chest is wide. The thorax must be well muscled without any sign of obesity. 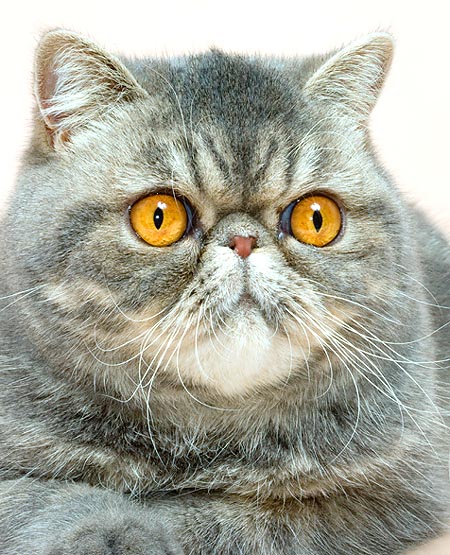 The legs are short, robust, strong and well right. The feet are round and solid. The tail is short, thick at the base, ending in a rounded tuft, but proportioned with the length of the body. In the case of the Persian, the tail is very thick.

Coat and texture of the Persian: long all over the body, shoulders included, the fur is thick, delicate and silky. An abundant undercoat renders the whole voluminous. The collar, much developed, continues up to between the front legs and under the belly.

Coat and texture of the Exotic Shorthair: thick and pleasant to touch, the fur is drawn on the body thanks to the thickness of its down hair.
Slightly longer than that of other breeds of short hair cats, it must not be, anyway, so much long to lie on the body or to wave.

The short hair variety of the Persian is called Exotic Shorthair.

All colours are recognized for the Persian and the Exotic Shorthair. The colours are usually grouped by division in order to facilitate the comparison during the exposition.

This division groups all the solid colours. 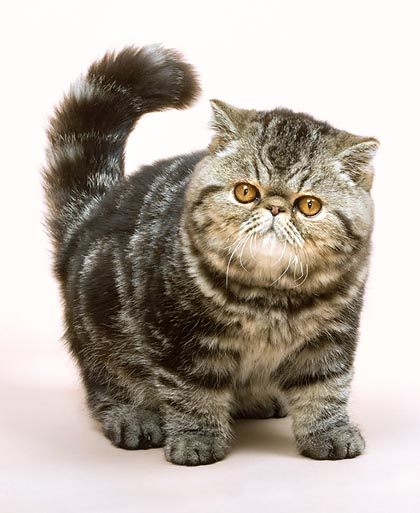 The tipping is a phenomenon giving the hair of the cat a white base even conserving the origin colour at the tip of the hair. Only the extremity of the hair is coloured in the case of the tipped cat. For the Shaded Persian, the coloured part extends up to a third of the hair. The Persians having these marks are called Chinchillas.

The hair is white in the Silver, golden in the Golden. The tabby marks do not appear.

Is considered as particolored every Persian or Exotic Shorthair of which part of the fur is formed by white dots. The bicolour or tricolour pattern is considered as best when it includes the 25% to 50% of the white.