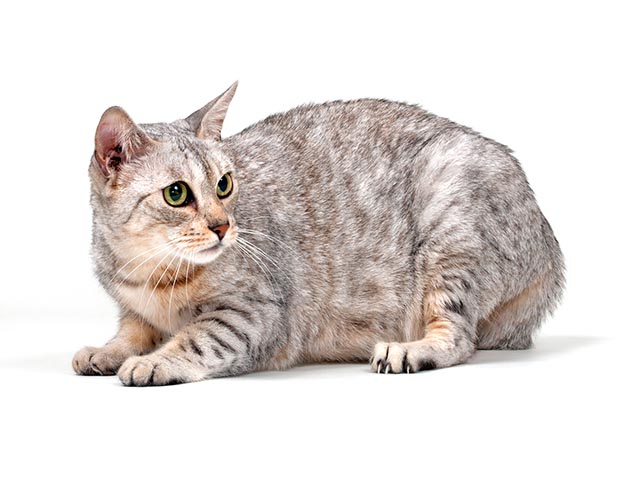 Some find that the hybridization of the wild races furnishes a wonderful contribution to the domestic feline. Others, on the contrary, give a negative assessment. In any case, these practices have created new races, amongst which stands the Savannah, born in USA. This big cat comes from the crossing between a serval and a domestic cat: the bengal, to which, in any case, it is very close. It resembles also to the serval, due to the big size, the colour and the typical ears. The first Savannah was created in 1986 by Judee Frank, who, together with Joyce Sroufe, defined its standard. The breed has been recognized only in 2002

The subjects born from the hybridization of a wild cat with a domestic one are called F1. The subjects of the following generation are called F2. And so on. In hybridization, the males are sterile during several generations (from 4 to 6), hence the utilization of domestic cats as male reproducers for creating new offspring. The generations from F1 to F3 are considered as wild, are not admitted to the cat shows and are subject to precise rules concerning their detention. Depending on the generations, the subjects from F4 to F6 may be not completely stabilized from the morphology and character point of view.

The exceptionally sociable character of the serval, allows to quickly getting pleasant cats. But when we are close to the wild form, we have to be always ready to meet the most unexpected reactions. The Savannah is a big cat, much intelligent, curious, sociable, active, sweet and endearing. It jumps higher and runs faster than the other domestic cats. It loves going into the water. The characteristics looked for are those of the serval: small head, big ears located at the top, very long body, long legs, rather short tail and spotted coat. 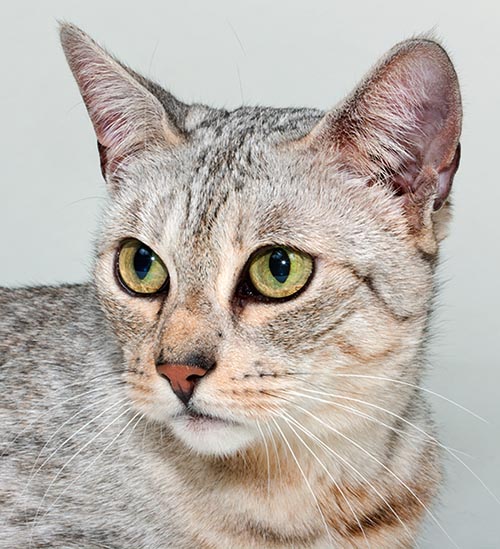 Small if compared to the body, the head, seen from the front, forms a triangle from which the ears are excluded. The skull must be quite slightly rounded. The front, from straight to just convex, prolongs, with a very slight concave inclination up to the beginning of the nose. This last, wide and straight, ends in a swollen truffle.

No pinch must disturb the neat lines of the muzzle. The chin, even if not receding, is rather reduced.

The medium sized eyes are almond-shaped. Well spaced, they are ideally adorned by typical white lachrymal dots (only in the agouti cats). The colour, going from the golden to the green, does not depend from the colour of the coat, and when evaluating them only the intensity is taken into consideration.

Large and high on the head (the inner side stands practically on top of the skull), the ears have wide base and rounded extremity. The thumbprint, typical of the agouti cats, is appreciated outside the ear (and this solely in the agouti cats).

Long and muscular, the neckline is elegant. The posture of the head is haughty, straight and slender.

Of semi-foreign format, the body is characterized by a very deep thoracic cage and a slightly raised rump. The hips and the thighs, long, firm and muscular, are a little oversized. However, the legs, long and narrow, are firm. When seen from behind, the hind ones are very high. Small and oval, the feet have elongated toes. Fairly thick, the tail is about ¾ long than that of the normal cats. When the animal is standing, it does not touch the ground. Mobile and quite expressive, it is ringed in the agouti cats and its black tip is rather rounded.

Of short or medium length, the coat is much particular to the touch: the guard hair, little rough, covers a thick undercoat, more sericious, and the spots appear softened. Whatever is their colour, all Savannahs must have the same patron spotted tabby, with the greatest possible number of small spots on the legs and the head. The spots, always black, are round, oval or elongated. The belly is spotted. The base of the fur of the Savannah brown spotted tabby goes from the fauve to the orange, without ticking. The throat and the belly have a dull white colour. In the silver, the base of the fur is silvery. In the black and black smoke, non-agouti cats, the ghost tabby marks must be clearly visible.

The truffle of the Savannah tabby is red brick surrounded by a black small edge or wholly black. It is black in the black and the black smoke ones.

Colour: Black colour only in the tabby and smoke patterns.