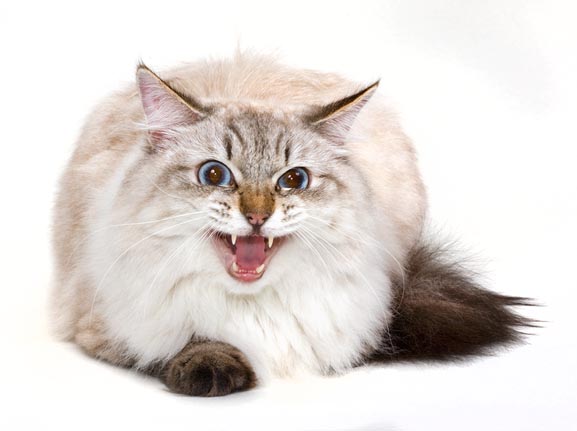 After having installed in Europe, pushed by its exploring temper, the cat has gone up to the Urals, and even further ahead, thus meeting the wild cat of the Siberian forests. And from this meeting a new breed was born: the Siberian.

Just like it happened in other European countries, the aristocracy was fond of other feline breeds, such as the Siamese, the Birman and the Angora, and the crossing with these cats with the Siberian gave to this new breed a huge variety of colours.

Since the time of Peter the Great, the cat was appreciated and protected. But the qualities of the Siberian were recognized only later.

It is with the Perestroïka, in the eighties, that the Russians began to be interested in the breeding of cats. And it is with the fall of the Berlin Wall, on November 9th, 1986, that the Siberian became known to the western countries.

The Siberian is a big cat (from 6 to 10 kg for the males, from 3,5 to 7 kg for the females). A quiet strength, very active and energetic, but tolerant with the other domestic animals and very much attached to its master. 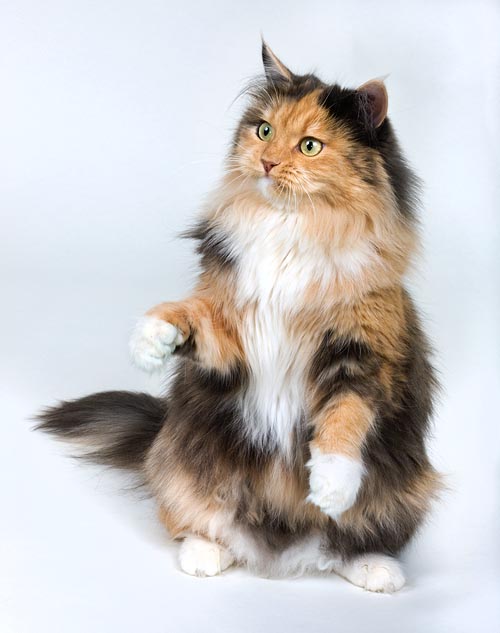 Curious and intelligent, it needs company and doesn’t love to be left alone. Playful, it willingly reiterates the moves that made its master laugh.

In order to survive, the Siberian cat needed the comfort of a heated house, and for not being refused, it has adapted, becoming sociable and clean, a precious quality it has kept till our days.

This is perhaps the reason why, through the natural selection, it has been transformed into a cat which does not practically cause allergies (the level of the FEL D1 protein is, as a matter of fact, very low in its saliva).

Blunt triangle-shaped, the head is broad with rounded contours. The cheekbones, seen from the front, are not unusual or protruding. The skull, broad, is rather flat. The front, side viewed, is slightly rounded and is prolonged by a slight slope at the level of the eyes. The nose is moderately short and flat.

Round and strong, the chin must be without pinch. Often, the females have the muzzle smaller than that of the males. The chin s rounded, but not pinched. The vibrissae are long and thick.

Big, almost round, the eyes are well spaced one each other, separated at least by the width of an eye. They are placed slightly oblique, but without assuming an oriental expression. All colours are admitted in the eyes, regardless of the coat, but the colorpoint having the blue eyes.

Medium-sized, the ears are broad at the base, away from each other about one and a half times their width. Seen from the side, they are slightly pointed ahead. Rounded at the extremity, they are covered outside by an abundant fur which hides almost completely their base. Also their inner side is protected by an abundant hair. The lynx tips are appreciated. The neckline, round and short, is well muscled. 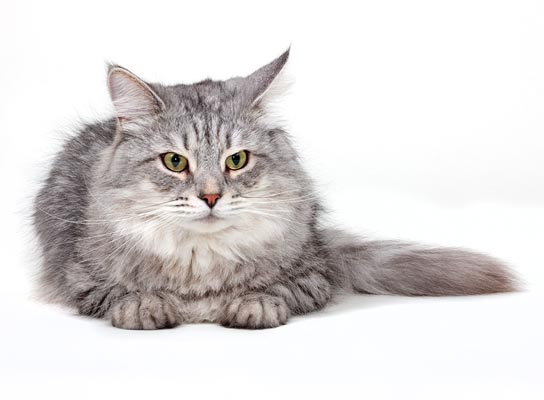 The body, stocky, heavy and muscled, of semi-cobby format, has a typical shape called “barrelled”, due to the roundness of its ribs and of the musculature. The rump is rounded and is higher than the shoulders. The abdominal is powerful.

The legs, of medium height, are strong and muscled, with a powerful structure. Big and round, the feet shows great interdigital pelosity.

The tail broad at the base, gradually then reduces and ends with a roun ded tip. It is endowed of a rich fur. Ideally, it should reach the height of the base of the shoulder blades.

Middle-long or long, the fur of the Siberian is formed by three types of hairs: guard hair, awn hair and down-hair. The neckline, the shoulders and the back are covered by thicker and brighter guard hair. The collar starts from behind the head and reaches the throat. The down-hair is abundant. The hairs of the belly may slightly crinkle even if this character is not particularly sought for. In the particolors, every proportion of white is accepted whatever the size and the position. The overall physical look must show strength and vigour, keeping, in the meantime, a sweet expression.

All colours, but those based on chocolate, lilac, cinnamon and fawn. The colorpoint variety Siberians are called Neva Mascarade.