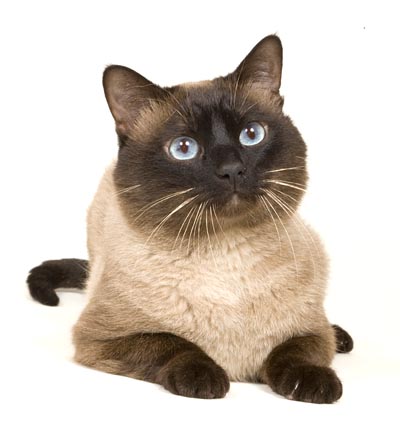 Since long, the Siamese has seduced the lovers both for its unique beauty due to its pattern colourpoint it has brought to other breeds and for unique and exclusive character which render it a very attaching and excluside companion.

The Siamese of the beginning of the century had a well rounded face like our European cat, as we can see from the Walt Disney animated cartoon, Lady and the Tramp. Since then, Siam has become Thailand, but the Siamese keeps for us the memories of that time.

With the evolution of the tastes, the breeders have made of it a cat more and more long-limbed, in order to enhance it oriental look. But several nostalgic people have remained attached to the traditional Siamese and have wanted to keep it this face so much captivating. This old type Siamese has ended up in being raised to the rank of a breed under the name of Thaï in homage to its origins, the Siam which later had become Thailand.

The Thaï, nicknamed “our grandma’s cat”, ancestor of our modern Siamese, has maintained its so much captivating character: strong personality, exclusive loving attachment to the master, very dominant towards the rest of the feline race. It is lively and talkative.

Slightly longer than broad, the head, as seen from the front, forms an equilateral triangle with soft edges. The cheeks as quite round in the females and can be more developed in the males, in a reasonable proportion if compared to the general structure of the cat. By profile, the skull and the front are slightly rounded and prolonged by a harmonious convex curve till over the eyes, and a slight and gradual concave curve under them.

Of medium length, neither pointed nor excessively rounded, the muzzle gently prolongs the triangle of the head. The chin is firm. The eyes are oval, slightly oblique. The axis of the eyes prolongs in direction of the base of the ears. The colour is of the most possible intense blue.

Broad at the base and rounded at the tip, the ears are of medium size and well spaced, in such a way to respect the equilateral triangle of the head. Of medium length, the neckline is well muscled, especially in the males. Of semi-foreign format, the body is of medium size, much muscled but without heaviness. The chest is well open and slightly rounded. 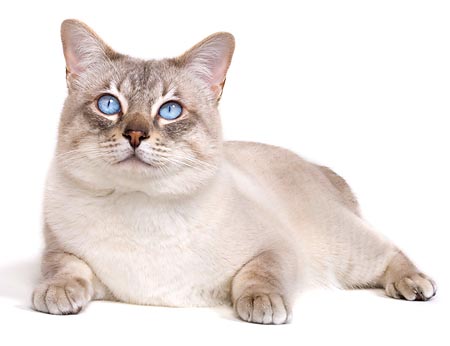 Rather fine, the paws are well proportioned if compared to the body. The feet, oval, are of medium size. Of medium length, thick at the base, the tail gets thinner up to a slightly rounded extremity.

The hair is short and thick. The fur is lying on the body. The texture is delicate and silky.

The Thaï is a colourpoint cat. There must be, therefore, a net contrast between the colour of the points, which is the most possibly homogenous, and that of the body, which is uniform.

The absence of ghost marks is desired, even anyway a tolerance in the tabby cats.

It must be taken into account the effect of the age and the base colour in the evolution of the colourpoint pattern: the points are often developed not completely in the kitten, especially in the diluted tints, whilst the darker shades on the body of a mature cat are normal.