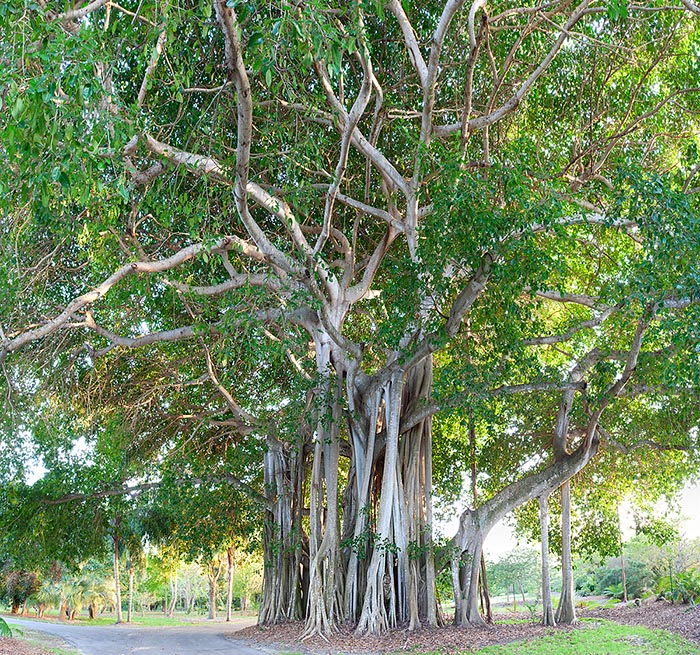 The species is native to Bhutan, China (Guangdong, Guangxi, Hainan and Yunnan), Philippines, India, Indonesia (Celebes, Java and Sumatra), Andaman Islands, Nicobar Islands, Malaysia, Myanmar, Thailand and Vietnam, where it grows in the tropical forests up to about 2000 m of altitude.

The name of the genus is the Latin one utilized for the common fig (Ficus carica); the name of the species is the superlative of the Latin adjective “altus, a, um” = high, with obvious reference.

The Ficus altissima Blume (1825) is an evergreen up to about 30 m tall tree with trunk of 1 m of diameter or more and smooth, brown-greyish bark; the young branches are green, pubescent, of about 1 cm of diameter; often it produces aerial roots and secondary trunks. The leaves, on a robust, 2-10 cm long petiole, are alternate, of ovate-ovate-elliptic shape, 10-25 cm long and 8-12 cm broad, with entire margin and obtuse or acute tip, coriaceous, of bright green colour on the upper page, paler below, with the pair of basal veins V-shaped and 5-7 pairs of yellowish lateral secondary venations; stipules (appendages at the base of the leaf having the main function of protecting it during the initial phase of the growth) deciduous, lanceolate, 2-3 cm long, pubescent.

The inflorescences are syconia, that is, cavities of the fleshy walls wholly enclosing the flowers, accessible through an apical opening surrounded by 3 tiny scales (typical example, those of the common fig, Ficus carica). The syconia are axillar, sessile, usually produced in pair, globose or ellipsoid, of 1,7-2,8 cm of length and 1,3-2 cm of diameter, initially pubescent, then glabrous, of yellow to red colour when ripe, with female and male flowers presently in the syconium at the same time. For the fructification, the presence of the pollinating insect is necessary, as it is known, to each species of Ficus is associated a specific insect of the family of the Agaonidae (in our case, the Eupristina altissima Balakrishnan & Abdurahiman, 1981), which, in turn, can reproduce only if it’s present the species of Ficus to which it is associated; the tiny seeds (achenes) contain only one seed each.

It propagates by seed, interred superficially on organic substratum, sandy, kept constantly humid, in luminous position at a temperature of 22-24 °C; in nature it can grow initially as epiphyte on palms or other trees, surrounding their trunk with its roots which reach the soil, and which, eventually, end up in “strangling” it after a certain number of years; in some zones it has become invasive. It reproduces also by cutting in spring and by air layering in early summer.

Species standing amongst the most ornamental of the genus Ficus, cultivable in full sun or slight shade in the tropical, subtropical and, marginally, in warm temperate climate zones, where it appears to be able to resist for a very short period to temperatures around the -2/-3 °C, with damage to the foliage. It is not particular about the soil and is fairly resistant to drought. It is utilized as shade tree in parks, vast gardens and along the roads, it should be, however, taken in careful account at the moment of the implant, of the superficial and invading rooting apparatus, it is therefore to be chosen a position sufficiently far away from buildings, roads and pavements. It has a fairly good employment, together with a variegated form, as pot plant for indoor decoration, in an as much as possible luminous position and well drained substratum kept moderately humid, with winter temperatures over the 14 °C.

Locally, the aerial roots are utilized for fabricating ropes. The contact with the milky lymph can cause allergic reactions in particularly sensitive persons.