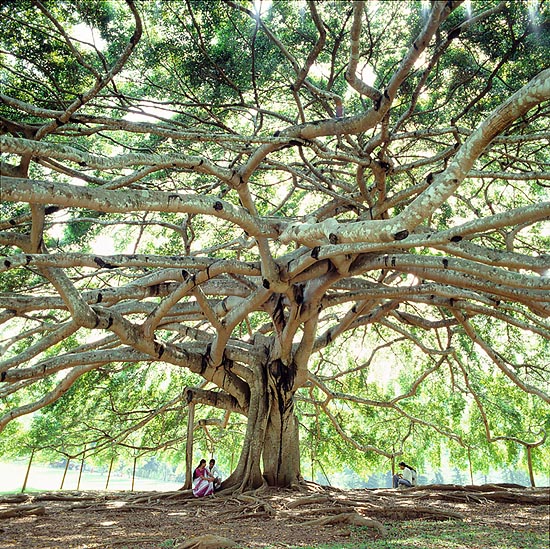 The name of the genus is the Latin name utilized for the common fig (Ficus carica).

The name of the species if of uncertain origin, probably coming from “benzoin”, a resin obtained from tropical trees and which was thought produced also by this one.

The Ficus benjamina L. (1767) is an evergreen, up to about 20 m tall tree, with trunk up to 50 cm of diameter, with smooth greyish white bark and ample crown with possible production of aerial roots from the main branches; the young branches are pendulous.

The leaves, rather coriaceous, on a short petiole, are alternate, from ovate to elliptic with entire margin and pointed tip, 3-10 cm long and 2-5 cm broad, of glossy dark green colour on the upper page.

The inflorescences are syconia, that is, hollows of the fleshy parts which completely surround the flowers which are accessible through an apical opening wrapped by three tiny scales (those of the common fig, Ficus carica, are a typical example). 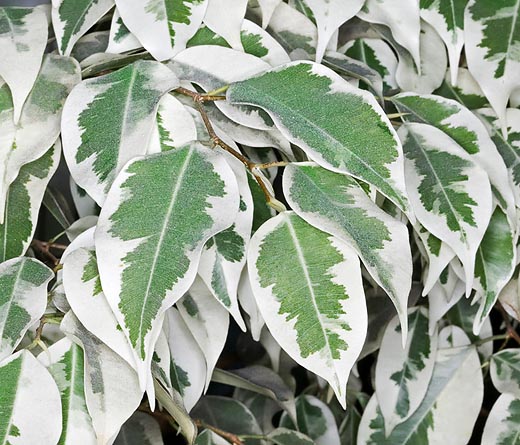 The syconia, produced on the young branches, are axillar, sessile (without petiole), solitary or paired, with a shape varying from more or less globose to piriform, of 0,8-1,2 cm of diameter, with colour going from yellow to purple red when ripe, with female and male flowers present at the same time into the syconium.

For getting the fructification, the presence of the pollinating insect is necessary, as it is well known, each species of Ficus is associated to a specific insect of the family of the Agaonidae (in our case, the Eupristina cyclostigma Wiebes, 1992), which, in turn, may reproduce only if the species of Ficus to which it is associated is present.

The fruits (achenes), almost reniform, of about 2 x 1 mm, do contain one seed only. It propagates by seed, placed superficially on organic, sandy, substratum, kept constantly humid, in luminous position at a temperature of 22-24 °C.

In the wild, it can initially grow as epyphite on other trees, surrounding their trunk with its roots which reach the soil, and which possibly ends up in “choked” after a certain number of years.

It reproduces also by cutting in spring and by air layering in early summer. It is a much diffused and appreciated species in the tropical and subtropical climate zones, due to the fast growth and the elegant crown, expanded and thick, with the thin pendulous young branches, as isolated specimen, in parks and vast gardens, as well as a street tree.

When adult, it may resist to exceptional decreases of temperature down to about -3 °C for a very short time, even if damage of the foliage.

The inflorescences are yellow or red syconia of 0,8-1,2 cm of diameter © Mazza

It is not particular for what the soil is concerned, even if poor, and may resist, adult, to drought periods; it has also a moderate resistance to the wind and the saltiness and bears fairly well the prunings. Negative aspects are the abundant production of fruits, annoying when they fall on areas of passage, and the rooting apparatus, superficial and invasive, which is to be carefully counted for by the time of the planting.

As pot plant, it’s one of the most popular for indoor decoration, in its countless varieties, even variegated, and is to be cultivated in much luminous location at temperatures over the 12 °C.

Watering must be abundant in summer, avoiding, in any case, the stagnations which may reveal dangerous, and allowing the soil to dry up almost completely before giving water again; moderate in winter.

When in apartment, the most frequent problem is the unexpected fall of the leaves: if the phenomenon is limited and takes place by early winter, it is matter of a normal leaves replacement, if important, the causes may be various, a fairly frequent one is the change of the position as it is a plant which does not like the displacements; if these ones are necessary, a hydro soluble fertilization, given some days before, may be of help in overcoming the crisis and in minimizing the loss of the foliage. Other causes may be insufficient light, low temperature, too dry atmosphere, current of air and sudden variations of temperature.

The prunings, moderate, are to be done by the end of winter in order to maintain a compact shape. It is easily subject to mites (red spider) and cochineals attacks.

Leaves and bark are locally utilized in the traditional medicine. The foliage is toxic if swallowed and the contact with the milky sap may cause allergic reactions in particularly sensitive individuals.