The species is native to Papua New Guinea where it grows in the pluvial forests, mainly along the banks of the water streams, between the 800 and 2700 m of altitude.

The name of the genus is the Latin one utilized for the Common fig (Ficus carica); the specific name is the combination of the name of the genus Dammara and of the Greek substantive “ὄψις” (opsis) = look, due to the resemblance of the young fruits with those of the Dammara alba Rumph. ex Hassk., 1842 (synonym of Agathis dammara (Lamb.) Rich. & A. Rich., 1826). 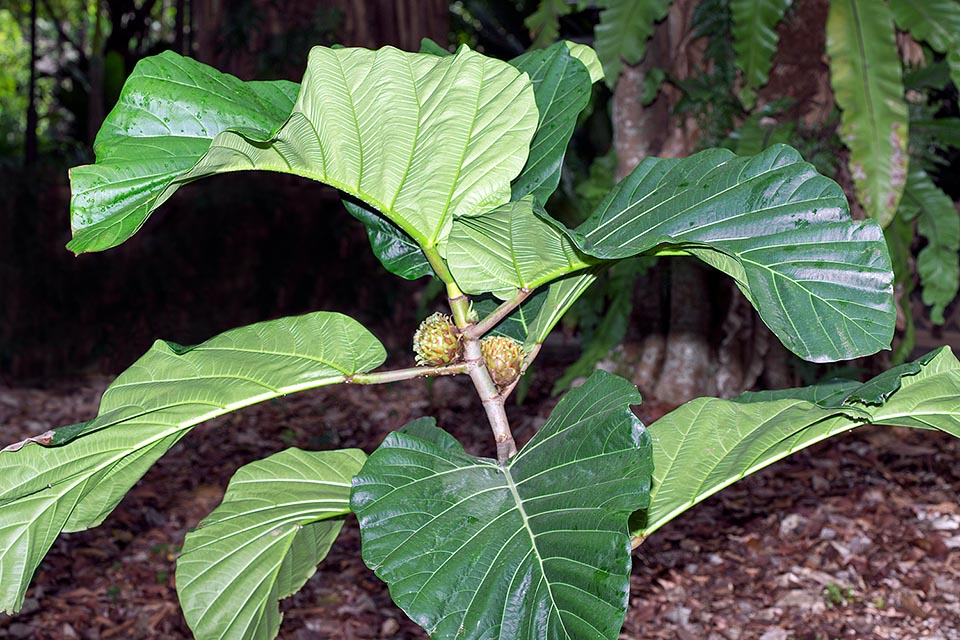 The Ficus dammaropsis Diels (1935) is a shrub or small tree evergreen very ramified, dioecious, 5-10 m tall, with smooth greyish bark; from the wounds exudes an abundant milky sap. The leaves, on robust petiole, are alternate, simple, ovate with cordate base, sinuous margin, wavy lamina between the veins and short pointed apex, up to 90 cm long and 60 cm broad, coriaceous, of glossy dark green colour above, yellowish pale green below; the young leaves are bronze. Stipules (appendages at the base of the leaf which have the main purpose of protecting it during the initial phase of growth) double, deciduous, of pale yellow colour, 15-28 cm long.

The inflorescences are hollows from the fleshy walls, called syconia, that wholly wrap the flowers, accessible from an apical opening. The syconia, sessile, produced almost continuously, arise at the axil of the leaves, are globose, of 6-13 cm of diameter, with male and female flowers on different individuals, covered by imbricate bracts of decreasing size towards the apex where they cover the opening, initially green, then brown-reddish when ripe; the tiny fruits (achenes) contain only one seed. The pollination is done by an insect belonging to the family of the Agaonidae, in our case Ceratosolen abnormis Wiebes, 1963, as known to each species Ficus of is associated a specific insect, that in its turn can reproduce only in presence of the species to which it is associated. 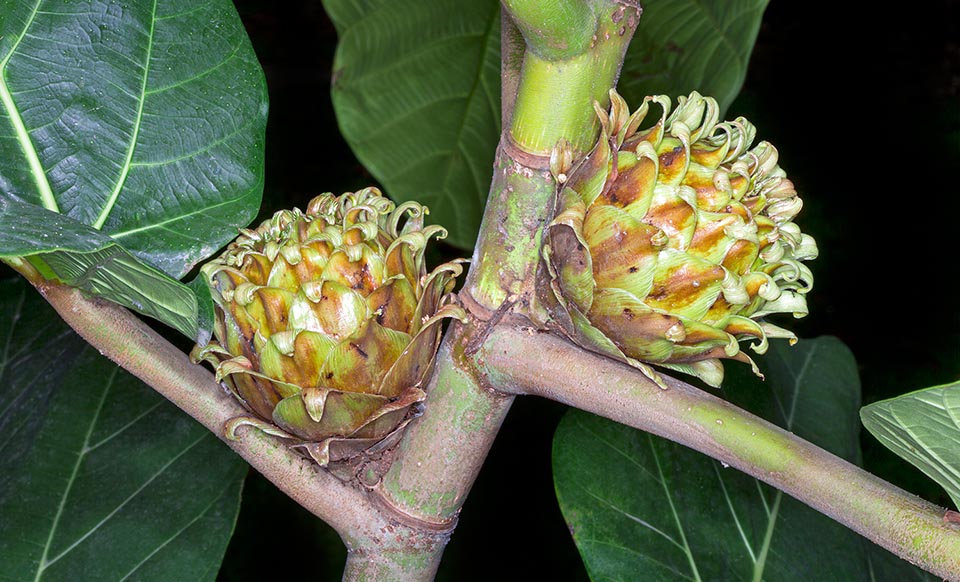 Cultivated in the tropical gardens for the big ornamental leaves that border on the metre, has odd sessile globose syconia, of 6-13 cm, with imbricate bracts, decreasing towards the apex, that when ripe fade from green to brown-reddish. The boiled young fruits are eaten as vegetable by the natives and the big leaves serve to wrap foods © Giuseppe Mazza

It reproduces by seed, placed superficially in draining loam rich of organic substance maintained humid at the temperature of 24-28 °C, by cutting and by air layering. Species considered by many as the most ornamental of the genus due to the showy leaves, cultivable in the tropical or humid subtropical climate regions, its cultivation may be tried in sheltered position in the milder temperate-warm ones where temperatures close to 0 °C are very short lasting exceptions. It requires a position in full sun or slightly shaded and fertile soils, draining, from slightly acidic to slightly alkaline, maintained almost constantly humid, but without stagnations.

In New Guinea highlands the young leaves, that are frequently for sale in the local markets, and the boiled young fruits are consumed as vegetable by the natives, the big leaves are furthermore utilized to wrap the foods while cooking; the outer layer of the fruits is edible and is at times consumed in famine periods. The fibres gotten from the bark are utlized to make ropes, tisues, capes, bags, headgears, and various handicrafts.