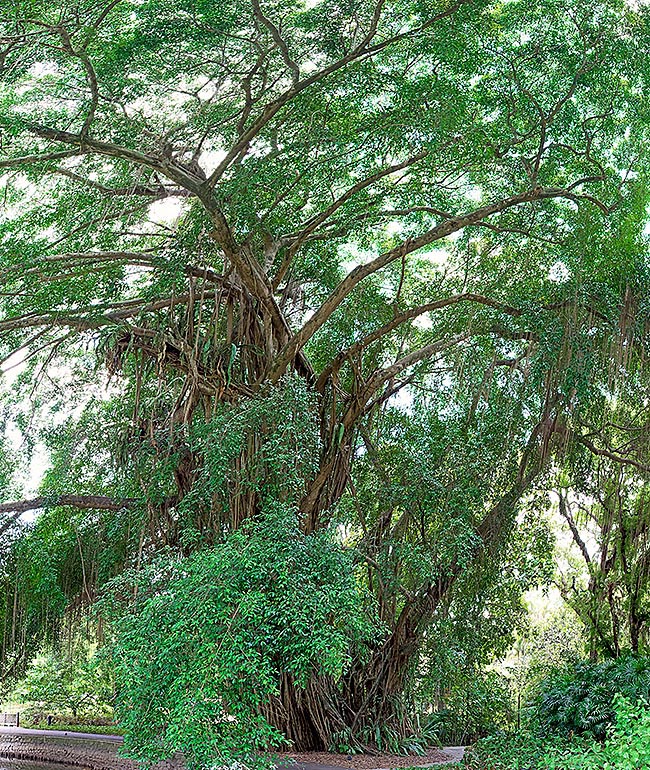 The species is native to China (Yunnan), India, Indonesia (Java and Sumatra), Malaysia, Myanmar, Thailand and Vietnam where it grows in the humid forests up to about 700 m of altitude.

The name of the genus is the Latin one utilized for the Common fig (Ficus carica); the species is honoured to the German botanist Wilhelm Sulpiz Kurz (1834-1878).

The Ficus kurzii King (1887) is an evergreen tree usually tall up to 20 m, but that can reach 50 m in the old specimens in the wild, with greyish bark and main branches from which develops a multitude of aerial roots that once reached the soil merge and enlarging form a sort of adventitious trunks.

The leaves, on a 0,5-2 cm long petiole, are simple, alternate, ovate-elliptic with pointed apex and entire margin, coriaceous, of intense green colour and glossy above, 5-15 cm long and 2,5-6 cm broad; stipules (appendages at the base of the leaf that have the main task to protect it during the initial growing phase) deciduous, lanceolate, 1-1,2 cm long.

The inflorescences are cavities with fleshy walls, called syconia, that enclose wholly the flowers, accessible from an apical opening enclosed by 3 tiny scales.

The syconia are axillar, sessile, produced in pair, globose to piriform, of 1-1,3 cm of diameter, of bright red to purple red colour when ripe, with female and male flowers present at the same time in the syconium. For the fructification is needed the presence of the pollinator insect, as known, to each species of Ficus is associated a specific insect of the family of the Agaonidae, that in turn may reproduce only if is present the species to which is associated; the tiny fruits (achenes) contain only one seed.

It propagates by seed, placed superficially in luminous position on organic substratum, sandy, maintained constantly humid at a temperature of 24-26 °C; it reproduces also by cutting in spring and air layering in early summer. 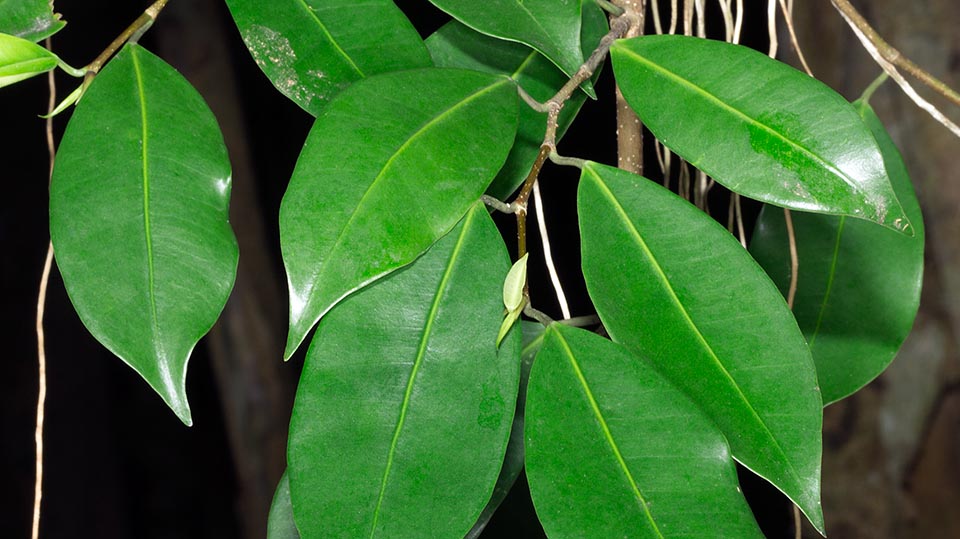 The even 15 cm long leaves are simple, alternate, ovate-elliptic with pointed apex and entire margin, coriaceous, intense green and glossy above © Giuseppe Mazza

Tree with ample and dense crown and with characteristic aerial roots, little known out from its origin areas, utilizable as shade tree in parks and large gardens in the tropical and subtropical climate zones, keeping in mind in its collocation the size it may reach.

It requires full sun and is not particular about the soil, even if poor, and can resist when adult to drought periods. In pot, in loam rich of humus with addition of coarse sand or agri perlite around the 30%, could be utilized for the decoration of open spaces, where the climate allows so, and of luminous inner spaces, with lowest night temperatures over the 14 °C and regular waterings in summer, but without stagnations, moderate in winter. Due to its characteristics, is also an excellent subject for bonsai.