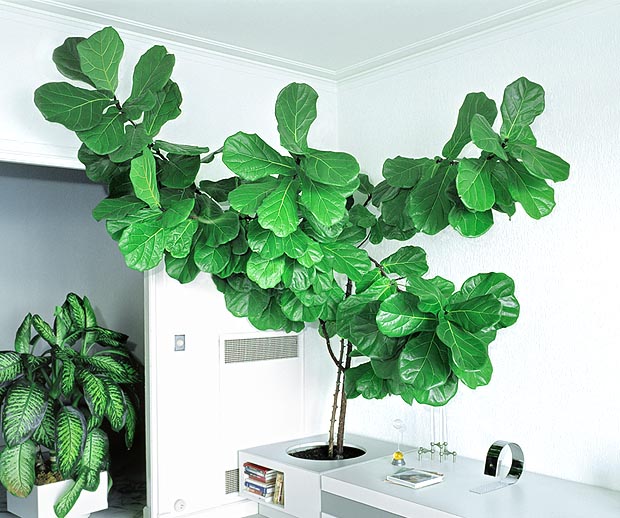 Ficus lyrata may be 20 m tall in the wild, but it adapts also in house © Giuseppe Mazza

This species is native to Western Tropical Africa (Benin, Cameroon, Gabon, Ivory Coast, Liberia, Nigeria, Sierra Leone and Togo), where it lives in the pluvial forests at low altitudes.

The name of the genus is the Latin one utilized for the common fig (Ficus carica).

The name of the species comes from the Latin “lyra” = lyre, the stringed musical instrument, with reference to the shape of the leaves.

The leaves, on a robust, 3-5 cm long, petiole, are alternate, entire, lyre or violin-shaped, with wavy margins, of glossy dark green colour, coriaceous, 12-45 cm long and 10-25 cm broad, grooved by deep veins, with about 4 cm long, triangular and persistent stipules (appendages at the base of the leafstalk whose main aim is to protect the leaf during the initial stage of its growth).

The inflorescences are syconia, that is, hollows of the flesh walls which enclose entirely the flowers, accessible only through an apical opening enclosed by tiny scales (typical example is that of the common fig, Ficus carica). The syconia, produced on young branches, are axillar, sessile (without petiole), paired, of globose shape, 2,5-4,5 cm of diameter, of green colour tending to the reddish when ripe, with small depressed whitish dots. For the fructification, it is necessary the presence of the pollinating insect. As it is well known, each species of Ficus is associated with a specific insect of the family of the Agaonidae (in our case, the Agaon spatulatum Wiebes, 1968), which, in turn, may reproduce only if it is present the species of Ficus to which it is associated; the fruits (achenes) contain one seed only.

It reproduces by seed, but more frequently by cutting, in a sandy substratum at the temperature of 22-24 °C, and by air layering in early summer. 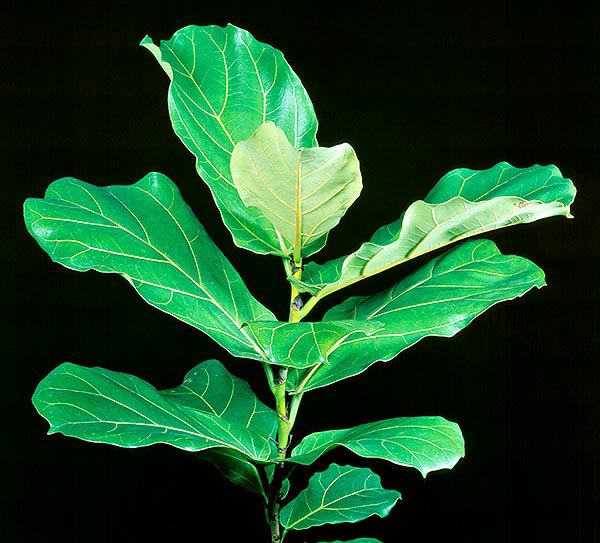 It is a rather slow-growing species cultivable in open air in the tropical and humid subtropical climate zones; its cultivation may be tried in sheltered location, in the milder warm temperate ones, as it resists to temperatures as low as about -2 °C for very short time, possibly with damage to the vegetative apices.

It grows in full sun or in slight shade and is not particular about the soil; it has a somewhat messy top due to the attitude to form long branches with leaves concentrated at the apex and to get a poor ramification, the pruning when young are useful to stimulate the tillering and to strengthen the main stem, thus conferring a greater resistance to the wind.

It is utilized as isolated specimen or in group in parks and gardens or as street tree; downsides are the fruits and the big leaves, particularly annoying when they fall on walking areas, and the superficial rooting apparatus.

Fairly common in pot for the indoor decorations, where it appears often as only one stem foliated up to the base which, while growing, tends to bend due to the weight of the big leaves; also in this case the lopping of the stem, to be done in spring, is useful for stimulating the emission of lateral branches.

The substratum must be rich of organic substance with 30% of coarse sand or agri perlite in order to improve the drainage. A very luminous position is ideal, also with some hours of daily direct sun, but it bears better than other species of the genus less favourable situations, with temperatures, in winter, over the 15 °C.

The watering must be abundant in summer, but allowing the upper layer of the substratum to dry up before giving water again, in any case it is important to avoid water stagnations and to dry up completely the soil, as these situations may cause the premature loss of the leaves; if the air is too dry periodical nebulisations to the leaves with non calcareous water at ambient temperature are necessary.

It is easily subject to mites’ attacks (red spider) and cochineals.

The contact with the milky sap may generate allergic reactions in particularly sensitive individuals.