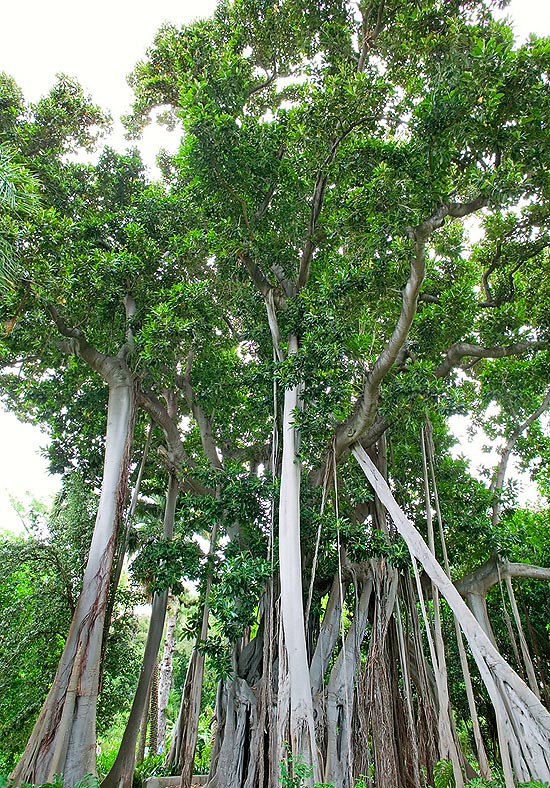 This species is native to Lord Howe Island (Australia), where it lives in the humid forests at low altitudes, along the south-western coasts on mainly calcareous soils.

The name of the genus is the Latin name utilized for the common fig (Ficus carica); the name of the species is the combination of the Greek terms “makrόs” = big and “phyllon” = leaf, that of the form is the Latin term “columnaris” = columnar, with reference to the columnar adventitious roots.

The Ficus macrophylla f. columnaris (C.Moore) D.J.Dixon (2001) is an evergreen, up to about 20 metres tall, evergreen tree, with a vast crown which may expand for tens of metres, supported by several aerial roots which reach the soil and which, becoming bigger and merging, form a sort of adventitious trunks; from the base of the main trunk depart long tabular roots.

The leaves, on a 4-6 cm long petiole, are from oblong to ovate, 10-20 cm long and 6-12 cm broad, covered by a tomentum of rusty colour below; the leaf, during the initial phase of the growth, is protected by two stipules (appendices at the base of the leaf), overlapped, externally of reddish colour, which detach spontaneously at the time of the distension.

The inflorescences are syconia, that is, hollows of the fleshy walls enclosing wholly the flowers, accessible through an apical opening surrounded by three tiny scales (typical instance, those of the common fig, Ficus carica).

The syconia, on a short peduncle, are axillar, usually paired, of globose-piriform shape, of about 2,5 cm of diameter, of colour varying from the brown red to purple with small paler dots when ripe, the female and male flowers are present at the same time in the syconium (monoecious species). For the fructification, the presence of the pollinating insect is indispensable, as t is known, to each species of Ficus is associated a specific insect of the family of the Agaonidae (in our case, Pleistodontes froggatti Mayr, 1906), which, in turn, can reproduce only if there is present the species of Ficus to which it is associated; the small fruits (achenes) contain one seed only.

The form columnaris differs from the species, which lives along the eastern coasts of Australia (New South Wales and Queensland), mainly for the presence of the columnar roots and for the rust-coloured tomentum covering the lower page of the leaf. It propagates by seed, placed superficially on an organic substratum, sandy, kept constantly humid, in luminous position at a temperature of 22-24 °C; in the wild, it may grow initially as epiphytic on other trees, surrounding their trunk with its roots reaching the soil, and which, possibly, may end in “strangling” them after a certain number of years. It reproduces also by cutting in spring and by air layering in early summer.

Imposing species of great landscape effect, it is cultivable in the tropical, and subtropical climate zones, marginally in the warm temperate ones, where it may resist, when adult, to exceptional drops of temperature down to about -3 °C for quite a short time, even if damage to the foliage. It is normally utilized as isolated specimen or in group in parks and very large gardens, far away from alleys and buildings, due to the vast and invasive superficial rooting apparatus; its employment in small gardens or as road tree is to be absolutely discouraged. It is not particular for what the soil is concerned, even if the same is poor and can resist, when adult, to drought periods; it is also resistant to the wind and, moderately, to the saltiness.

It has a limited utilization as plant in pot for indoor spaces decoration, in much luminous position, soil rich of humus with addition of coarse sand or agri-perlite around the 30% and winter temperatures above the 12 °C; the watering must be abundant in summer, in any case avoiding the stagnations which may reveal dangerous, and allowing the soil to dry up almost entirely before subministering water again, and moderate in winter.