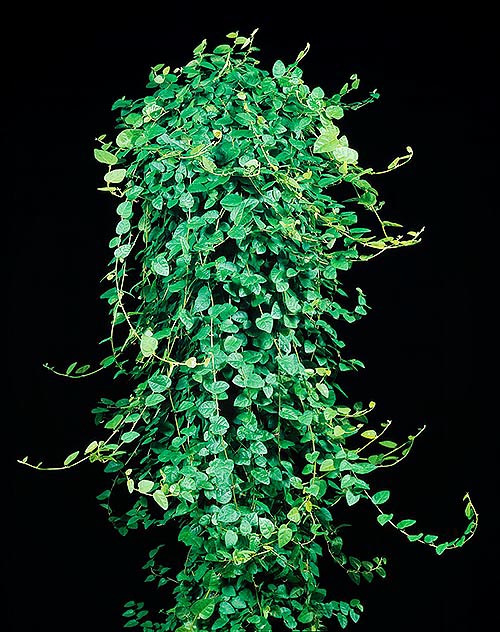 The name of the genus is the Latin name utilized for the common fig (Ficus carica); the name of the species comes from the Latin “pumilus” = dwarf, with reference to the posture of the plant.

The Ficus pumila L. (1753) is a climber as well as an evergreen bush which presents the phenomenon of the heterophylly (presence of dissimilar leaves on the same plant), in correspondence to the two growth stages, the sterile young, which may last several years, creeping or climbing, and the adult one, fertile, with ascending stems. During the young stage the branches, rooting at the nodes, are thin with alternate, distichous (lying on the same plan), cordiform or ovate, leaves, 2,5 cm long and 2 cm broad, flattened to the ground or to the support, of a dark green colour. When adult, the branches are robust and ascending with leaves having an oblong to obovate shape and entire edge, 4-12 cm long and 3-5 cm broad, coriaceous, smooth on the upper page, pubescent below.

The inflorescences are syconia, which are hollows with fleshy walls enclosing totally the flowers, accessible through an opening enclosed by 3 small scales (typical example are those of the common fig, Ficus carica). The syconia, obviously produced on the fertile branches, come out at the axils of the leaves on a strong, 1-1,5 cm long, peduncle and are solitary, from globose to obovoid to piriform, 4-8 cm long and 3-5 cm of diameter, green or with a slight reddish hue when ripe, initially pubescent. For the fructification the presence of the pollinating insect is necessary, as it is well known, to each species of Ficus is associated a specific insect of the family of the Agaonidae (in our case, the Blastophaga pumilae Hill, 1967), which, in turn, may reproduce only if the species of Ficus to which it is associated is present; the fruits (achenes) are almost globose. It reproduces by seed, but, usually, by rooted portions of stem or by cutting.

The phenomenon of the heterophylly is conspicuous. The young leaves are 2,5 cm long, the adult even 12. Also the posture differs © Giuseppe Mazza

Species having a particular modality of growth, it behaves initially as climber, phase we may call juvenile, covering thickly the soil, rocks, walls or trunks of tree with a thick net of thin branches and small leaves, close and flattened on the support, to which it adheres with the adventitious roots, once the limit of this is reached, the adult, fertile, phase starts with ascending or horizontal branches, robust, with leaves having shape and size different from those of the juvenile phase and on which axils the syconia are produced.

Fast growing, it is mainly utilized for covering soil, rocks and walls, in full sun as well as in shade. We have to keep however in mind that like all climbers adhering to the surfaces it leaves traces which may be removed with difficulty; it is also capable of damaging woody structures, such as frames.

Many varieties have been selected, among which some variegated ones.

It is not particularly demanding about the soil and can stand temperatures as low as about -9 °C, the leaves are irreparably damaged between the -10 and the -12 °C, but usually the stems do survive and resume vegetating in spring; in these situations, however, usually the adult phase does not take place.

Initially, it is to be watered with regularity, while growing, it reveals fairly resistant to the dryness.

Well stabilized plants, they need annual prunings, in spring, in order to keep under control the lush vegetation, which, otherwise, may become aggressive.

It is often cultivated in pot, thanks also to its adaptability to poorly luminous situations, for indoor decoration, in drooping position, at the base of other plants, or having it climbing on supports covered by moss or on walls of greenhouses and winter gardens.

The watering must be regular in summer, reduced in winter; when the atmosphere is too dry, the nebulisations with non calcareous water at ambient temperature are quite useful.

The foliage is toxic if ingested and the contact with the milky sap may originate allergic reactions in particularly sensitive persons. Several parts of the plant are utilized in the traditional medicine, especially Chinese, for various pathologies.