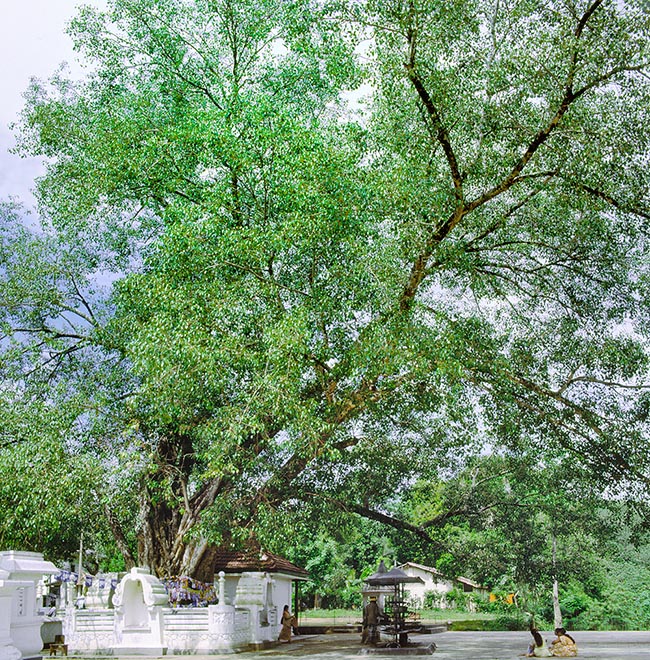 The species is native to Bangladesh, Laos, Myanmar, Nepal, Northern India, Northern Thailand, Northern Vietnam, and Pakistan where it grows in the forests up to about 1200 m of altitude.

The name of the genus is the Latin one utilized for the Common fig (Ficus carica); the name of the species is the Latin adjective “religiosus, a, um” = religious, adored, and refers to the spiritual and religious meanings that the tree has in the Buddhism and the Hinduism.

The Ficus religiosa L. (1753) is an evergreen or deciduous monoecious tree, 10-25 m tall; with trunk having a greyish bark, intially smooth then longitudinally fissured, forming an ample crown with expanded branches usually having no aerial roots. Intially epiphyte, then terrestrial when the roots reach the soil and enlarging sustain it, often “strangling” the host plant or breaking it if the roots penetrate inside it.

The leaves, on a 5-10 cm long thin petiole, are alternate, simple, 7-16 cm long and 5-12 cm broad, ovate-triangular to almost heart-shaped, with entire or slightly wavy margin and abruptly pointed apex that usually prolongs in a thin 2-10 cm long appendage, initially pinkish, then bright green, with 6-9 veins on the sides of the central one. 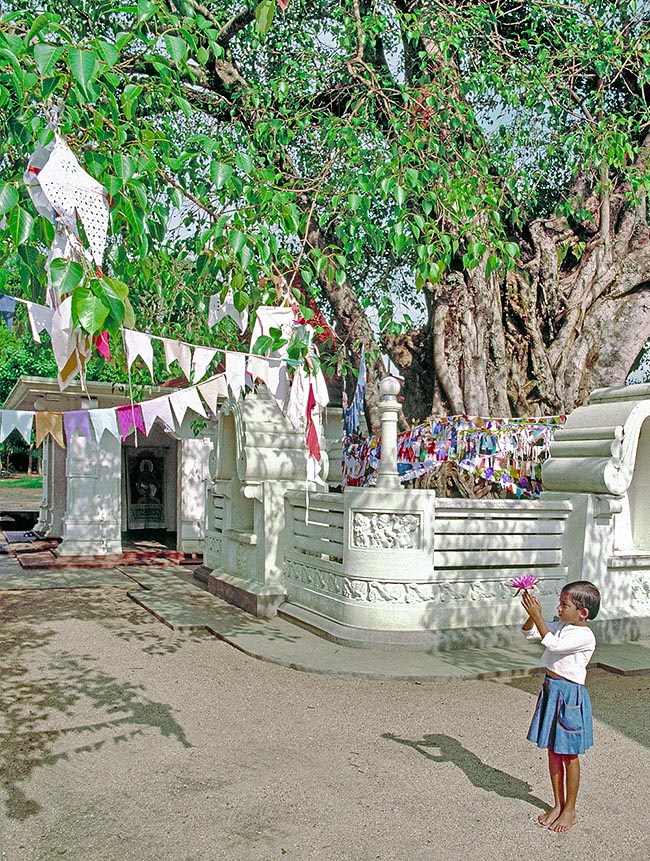 Of remarkable cultural and religious importance for Buddhism and Hinduism. After the tradition Siddhārtha Gautama, the Buddha received the illumination while sitting at its feet and under its crown is born the Hindu deity Vishnu © Giuseppe Mazza

Stipules (appendages at the base of the leaf with protecting function during the initial phase of growth) ovate-triangular with acuminate apex, 1-1,5 cm long, of yellowish brown colour.

The syconia, the typical inflorescences of the Moraceae that when ripe form the false fruit, the fig, are cavities with fleshy walls enclosing wholly the fruits, accessible to the pollinating insects through a small apical opening (ostiole), closed by three bracts.

The syconia are born in pairs at the axil of the leaves, are sessile, globose-depressed, of initially yellowish green colour, then dark purple when ripe, of about 1,5 cm of diameter.

To each species of Ficus is associated a pollinating insect of the family of the Agaonidae (in oue case Platyscapa quadraticeps Mayr, 1885) that in its turn can reproduce only if it is present the species to which is associated (obligate mutualism).

The fruits are consumed by various frugivorous species that contribute to the dispersion of the seeds and can become infestant, outside from the origin zones, if also the pollinating insect is present.

It propagates by seed, that does not have a long lasting germinability (few months), placed superficially on organic, sandy substratum, maintained constantly humid, in luminous position at a temperature of 24-26 °C, with germination times of 1-3 months; it reproduces also by cutting in spring and by air layering in early summer.

Tree of remarkable cultural and religious importance for the Buddhism and the Hinduism, after the tradition Siddhārtha Gautama (IV-V century B.C.), the Buddha (the Illuminated), has received the illumination while sitting at its feet and under its crown was born the Hindu deity Vishnu, for such reason is considered sacred and planted in proximity of the temples and has an important role in numerous rites and ceremonies. 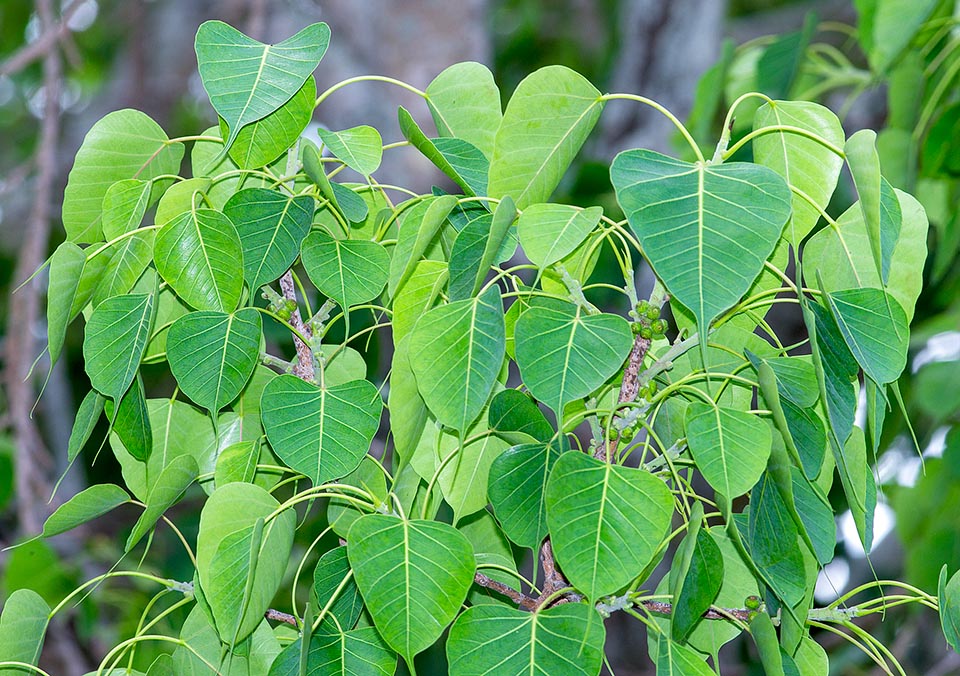 The heart-shaped leaves, end with a suddenly pointed apex that can reach the 10 cm. All the parts of the plant have medicinal properties © Giuseppe Mazza

Due to its remarkable ornamental characteristics, the fast growth and the easy cultivation it has diffused in the tropical, subtropical and, in lesser extent, in the mildest temperate-warm countries, where it can bear temperatures just under the 0 °C if exceptional and of short duration. Due to the size it can reach, and the extensive root system is suitable only for parks, large gardens and ample alleys.

It grows in full sun, or at most, in slight shade, and on a vast variety of soils, provided perfectly draining, maintained almost constantly humid, even if it can bear periods of dry. It is one of the most appreciated variety of Ficus to cultivate as bonsai.

It covers an important role in the traditional medicine, Indian in particular, where all parts of the plant are considered as curative and refreshing. 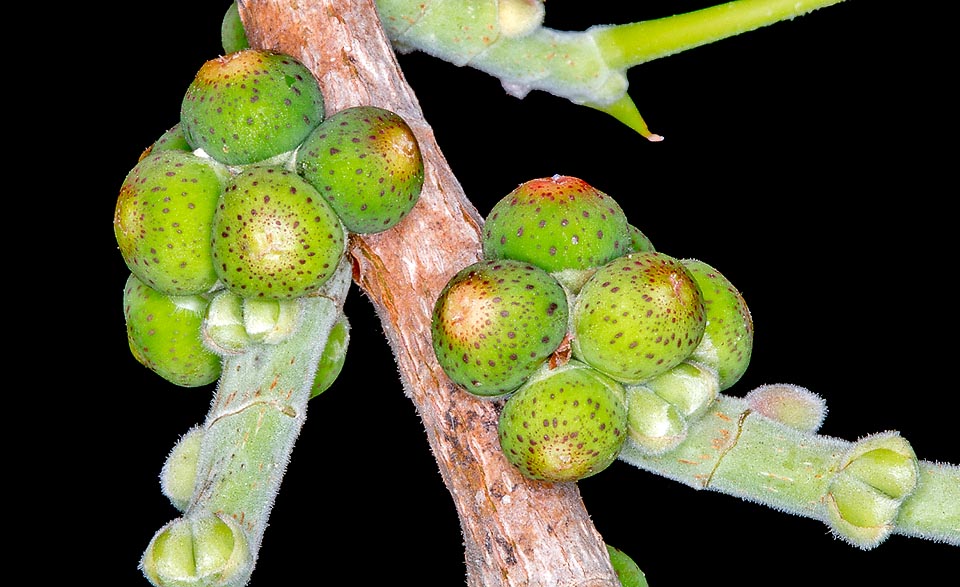 Close-up of the figs that reach when ripe the 1,5 cm of diameter. The tiny flowers are inside this protective structure, called syconium, and are pollinated exclusively by a minuscule insect of the family of the Agaonidae, the Platyscapa quadraticeps, that enters through a special small opening located at the apex of syconium © Giuseppe Mazza

Leaves, buds and fruits are cathartic, the bark, under various forms, is utilized for the diseases of the skin, for maturing boils, in the dysentery and gout, that of the roots as aphrodisiac, in the stomatitis and in the lumbar pains.

Laboratory studies have evidenced the presence in the plant of bioactive substances with antioxidant, anticancer, anti-diabetic, antimicrobial and anti-ulcer activity of possible interest for the official pharmacopoeia.

Ficus religiosa was last modified: May 1st, 2019 by Peppino