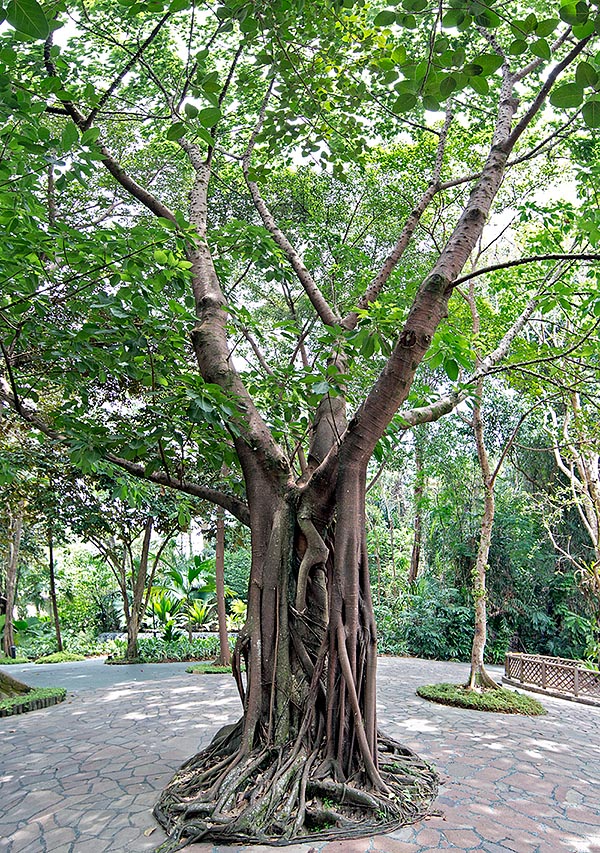 Native to south-eastern Asia, the Ficus superba can be 30 m tall. The buds and the young leaves are locally consumed as vegetables. Species particularly suitable for bonsai © Giuseppe Mazza

The species is native to Indonesia (Java, Kalimantan, Lesser Sunda Islands, Moluccas, Sulawesi), Malaysia, Singapore, Thailand and Vietnam where it grows in the monsoon forests from the sea level up to about 1800 m of altitude.

The name of the genus is the Latin one utilized for the Common fig (Ficus carica); the specific name is the Latin adjective “superbus, a, um” = superb, magnificent, with obvious reference.

The Ficus superba Miq. (1866) is a deciduous or semideciduous tree, hemiepiphytic or lithophytic, up to 30 m tall, with erect trunk equipped at the base with tabular roots (flat roots similar to buttresses that contribute in supporting the big trees) and wrinkled bark of reddish brown colour; from the wounds exudes an abundant milky sap.

The leaves, on a 4-10 cm long petiole, are spirally arranged, simple, ovate-elliptic with entire margin and obtuse or acuminate apex, 7-15 cm long and 3,5-7 cm broad, coriaceous, of intense glossy green colour above, paler below; stipules (appendages at the base of the leaf that have the main task of protecting it during the initial phase of growth) deciduous, ovate-lanceolate, pubescent, about 3 cm long.

The inflorescences are cavities with fleshy walls, called syconia, that enclose wholly the flowers, accessible through an apical opening enclosed by 3 tiny scales. The syconia, on a 0,7-1,5 cm long peduncle, generate on the old branches having no leaves, in pair or fasciculate, globose, of about 2 cm of diameter, of yellow colour tending to pink spotted purple when ripe, with female and male flowers present at the same time on the syconium; the tiny fruits (achenes) contain only one seed.

The pollination is done by an insect belonging to the family of the Agaonidae, in our case, Platyscapa corneri Wiebes (1980), as it is well known, to each species of Ficus is associated a specific insect, that in turn can reproduce only in presence of the species to which is associated. The fruits are an important nourishment for various species of birds that contribute in the dispersion of the seeds. In the wild, it can initially grow up as epiphyte on other trees, sourrounding their trunk with its roots that once reached the soil end up “strangling” it after a certain number of years. It propagates by seed, placed superficially on organic substratum, sandy, maintained constantly humid, in luminous position at a temperature of 24-26 °C; it reproduces also by cutting in spring and by air layering in early summer.

Species that due the luxuriant foliage and the showy fruits, that generate on the branches without leaves, would deserve a bigger diffusion as ornamental in the parks and large gardens of the tropical and humid subtropical climate zones, even if characterized by marked seasonality. It requires full sun or a slight shading during the initial phase of growth and is not particular concerning the soil, even if rocky or poor.

We have to keep present, at the moment of the implantation, the rooting apparatus, superficial and quite invasive for its correct placing, sufficiently far from pavements and streets. Young plants can be cultivated in pot for the decoration of outer spaces as well as inner ones, in a very luminous position, utilizing a draining substratum maintained constantly humid, with winter temperatures over the 14 °C; it is considered as a species particularly suitable for bonsai.

The sprouts and the young leaves are consumed locally, after cooking, as vegetables. The wood, clear with brown veins, of average density, has a limited utilization for coffers, bowes and hand crafted and artistic articles.