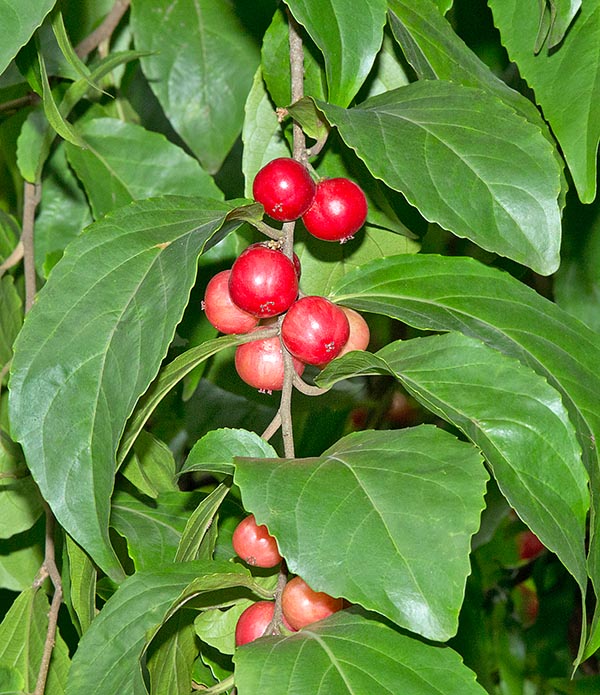 The species is native to China (Guangdong, Guangxi, Hainan and Yunnan), Indonesia, Malaysia, Papua New Guinea, Taiwan, Thailand and Vietnam, where it grows in the evergreen humid forests up to about 1500 m of altitude, often along the banks of the water streams.

The genus is honoured to the French Étienne de Flacourt (1607-1660) who was Governor of Madagascar; the name of the species is the local Malaysian one.

The Flacourtia rukam Zoll. & Moritzi (1846) is a usually dioecious evergreen tree, much ramified since the base, with 5-18 m tall trunk and up to 30 cm of diameter, equipped with robust simple or forked spines, up to 10 cm long, present also on the oldest branches, at times absent in the cultivated plants.

The leaves, on an about 0,5 cm long petiole, are simple, alternate, oblong-elliptic with margin slightly toothed and long thin apex, of 6-13 cm of length and 3-6 cm of breadth, glabrous, of dark green colour on the upper page, paler below; the deep pink to brown red young leaves are drooping.

The inflorescences are short slightly pubescent axillar racemes carrying tiny unisexual flowers, rarely bisexual, without petals and of greenish yellow colour. The fruits are globose berries, of 1,5-2,5 cm of diameter, with the persistent styles at the apex, from pale green to pink, to dark purple when ripe, with juicy whitish acidulous pulp usually containing 4 to 7 flattened seeds of irregular shape of about 8×5 mm. Being a usually dioecious species, for the fructification will have to be present plants of both sexes. It easily reproduces by seed, so much to have naturalized in many tropical areas where it has been introduced, in draining loam kept humid at the temperature of 22-24 °C, with germination times of 6-8 weeks, by cutting or through the rooting suckers it usually produces.

It is a species suitable for humid tropical and subtropical climate zones; its cultivation may be tried in the mildest temperate-warm ones, where values of temperature around the 0 °C are exceptional events and of very short duration. It requires an exposition in full sun or in partial shade and is not particular about the soils, even poor, kept almost constantly humid, even it better grows in the sandy and acidic ones.

The acidulous and astringent pulp is not usually consumed raw, even if crashing the fruit, for instance between the hands, it seems that the astringency is reduced, but is utilized for preserves and sauces; the young buds are eaten in some places raw as well as cooked as vegetable. The wood, particularly hard, is used in the constructions and for objects of everyday use. Leaves, fruits and roots are used in the traditional medicine for various pathologies.