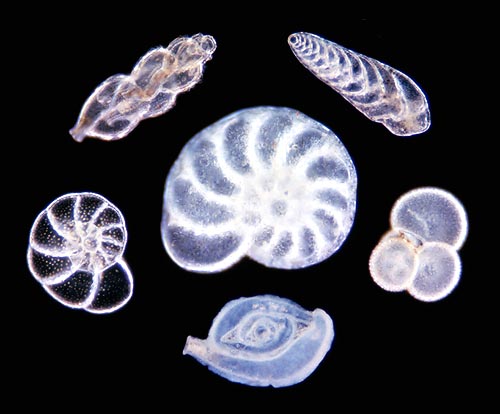 The systematic study of the order of the Foraminifera follows the classification done by the beginning of the nineteenth century by the French biologist and naturalist D’Orbigny, and is nowadays confirmed by the micro paleontological techniques.

The fossil remains of these small organisms, mainly present in the marine sediments of the late Paleozoic, Mesozoic and Cenozoic, are very useful to geologists looking for oil, as, thanks to them, basing on typical stratigraphic micro-faunal associations, can determine, with the drillings, the possible presence of hydrocarbons. They are amoeboid, eukaryotic heterotrophic marine bentonic protozoa, which perform their vital cycle on the bottom of the sea, or plankton-pelagic, living in surface, transported by the ocean currents. They have colonized all possible marine habitats.

They are found, even nowadays, in the tide zone, called intertidal or littoral zone, in the neritic zone, down to around 200 m of depth, where some light still penetrates, but the fauna and the flora are scarce, and in the abyssal zone, between the 200 and the 2.000 m of depth. They appeared in the Cambrian, from 542 to 488 millions of years ago, and later invaded all the marine habitat, adapting to many ways and styles of life.

They are unicellular organisms, with a diameter varying usually from 100 µm to 500 µm for those with pelagic life, and from 100 µm to 1 mm for those with bentonic life. For the bentonic ones, secured to the bottom, the shell can reach dimensions of the order of about ten centimetres. The Foraminifera are in fact protected by a pseudo chitinous or gelatinous shell, cemented by foreign materials, or formed by calcium carbonate under form of calcite (CaCO3).

Most of them, called Politalamii, have a calcareous shell formed by several chambers. These organisms have several pores on the shell (hence, the name of Politalamii, from the Greek polus = many, and thalamos = room, chamber), from where comes out the cytoplasm furnished of filamentous or ramified pseudopods and anostomosed, and from which originates the name of the subclass Rhizopoda. The cellular body is pluri-nucleated and, while the cytoplasmic mass grows, a containing chamber bigger than the previous one takes form.

The Foraminifera reproduce by multiple scission, but also agamically, through the formation of agametes or, sexually, with the formation of iso-agametes. These two last ways of reproduction alternate cyclically. When these animals die, the shell of the pelagic forms precipitates towards the bottom, accumulating over those of the bentonic forms, and in some marine zones the sediments reach even the number of 50.000 shells per gram of marine sediment.

The Globigerinoides sacculifer, a pelagic species similar to the genus Globigerina is, for instance, so much spread in the oceans, in the temperate and cold seas, that the shells are the main component of the mud of the marine bottom, called in fact “globigerina ooze”. In the tropical and subtropical oceans, other genera are more frequent, such as the Globorotalia (e.g. the species Globorotalia t. tumida).

Anyhow, the calcareous shells of the Foraminifera are found as down as 3700-4000 m of depth. Under these depths, their shells crumble, in fact, in very small crystals of calcite, which then dissolve completely by around the 5000 m. This phenomenon is due to the particular chemical-physical conditions found at these depths (in relation to the concentration of CO2, of the organic substances present in the water, of the temperature and of the pH), varying with the latitude from zone to zone. The CO2 comes from the descent of masses of water where it is present, or from the oxidation of organic substances.

The Foraminifera are characterized by a type of alimentation called Holozoic. They are, therefore, organisms with heterotrophic nutrition, which absorb the materials of animal or vegetal origin dissolved in the water. Besides the already previously mentioned species belonging to the genera Globorotalia and Globigerina, other quite known species are those belonging to the genus Pulleniatina, like the Pulleniatina o. obliquiloculata, the genus Miniacina, like the Miniacina miniacea, and the genus Neogloboquadrina, like the Neogloboquadrina d. dutertrei, discovered by the biologist and naturalist D’Orbigny, father of their classification.

Foraminifera was last modified: May 18th, 2018 by Giuseppe Mazza