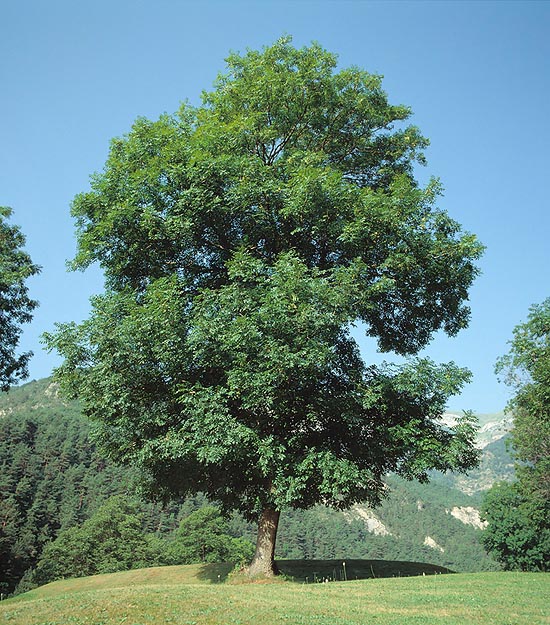 The Fraxinus excelsior may be 35 m tall with a trunk of 1,5 m of diameter © Giuseppe Mazza

The name of the genus is the Latin one of the plant, probably derived from the Greek “phrassein” = to close, to fence, being this plant often utilized for realizing fences.

The Latin name of the species, is the comparative adjective “excelsior” = higher, with reference to the height it reaches if compared to the other species of the genus.

The Fraxinus excelsior L. (1753) is a deciduous tree tall up to about 35 m with erect trunk of even 1,5 m of diameter and green grey and smooth bark in the juvenile specimens, greyish and fissured in the adult plants.

The leaves are opposite or sub-opposite, odd pinnate, 20-35 cm long, with 7-13 leaflets from oblong to lanceolate, 4-10 cm long and 1-3 cm broad, finely dentate at the margins, glabrous and of intense green colour on the upper page, pale green and at times tomentose along the main vein below; typical are the blackish and velvety dormant buds.

The inflorescences are axillary panicle in spring, before the appearance of the first leaves, on the one year old branches, carrying hermaphrodite or unisexual flowers on the same plant or on different ones, having no calyx and corolla, without nectar and odourless. 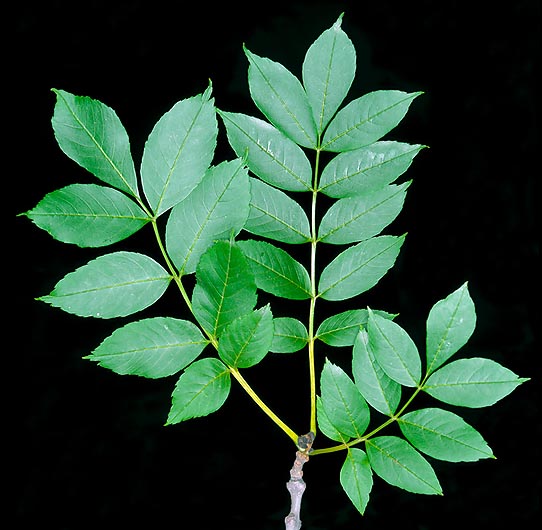 In the monoecious plants, with unisexual inflorescences present on the same plant, the stigma is receptive before the ripening of the pollens (proterogyny), this favours the crossed fecundation; the pollination is anemophilous, as it is suggested by the absence of any protecting element and of attraction for possible pollinators.

The fruits, in hanging bunches, are samaras (indehiscent dried fruits equipped with a membranous wing), elliptical, 2,5-6 cm long, initially green, brown when ripe, containing only one 1-2 cm long seed which remain on the plant till the following spring, and then are dispersed by the wind thanks to the presence of the wing.

It usually reproduces by seed, which has a long intrinsic dormancy, in fact, in the wild the germinations takes place after two or more years from the complete ripening; for saving time, we may proceed to the sowing by late summer, when the samaras are about to turn from green to brown, or in spring, for perfectly ripe seeds, after a warm stratification, with the seeds, placed in layers in peat, sand or agri-perlite, kept humid and at a temperature of 18-22 °C, for 2-3 months and then cold, by around +4 °C, for four months. The first flowering takes place after 20-30 years from the sowing.

It is one of the most ornamental arboreal species of the European flora, fast growing during the first years of life; it prefers sunny positions, as it grows with difficulty in the shade, and deep, loose, fertile, neutral or alkaline and humid soils, but without stagnations, the absence of humidity in the air and in the soil is one of the major limiting factors for its cultivation. 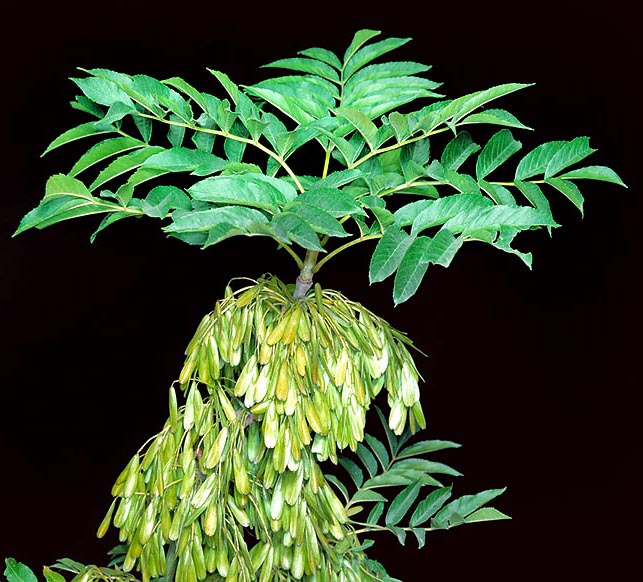 The fruits, in hanging bunches, are 2,5 cm samaras with one seed only © Giuseppe Mazza

It resists to very low temperatures, seen its origin zone, but the new shoots are sensitive to the late spring frosts and the fact that it begins to vegetate by late spring is a defence against this possibility. It is often utilized as isolated specimen or in group, in parks and gardens, keeping however in mind in its collocation, that it has a root system very extended, which on the other hand renders it useful also for the erosion control.  Several varieties have been selected for ornamental purpose with variegated leaves or with hanging branches, amongst which stands, much appreciated, the Fraxinus excelsior ‘Pendula’. The wood, pale or pinkish, is of excellent quality, is particularly resistant and elastic, used in woodworking, for tools, sports gear, parts of boats and in the building; it is very good also as firewood.

The tree, which has had an important role in the mythology of many peoples, is utilized since remote times in the popular medicine and in phytotherapy, in particular the bark of the young branches, the leaves and the buds, for their diuretic and anti-inflammatory properties; but it should be noted that an improper and prolonged utilization, without a medical control, may expose to risks.