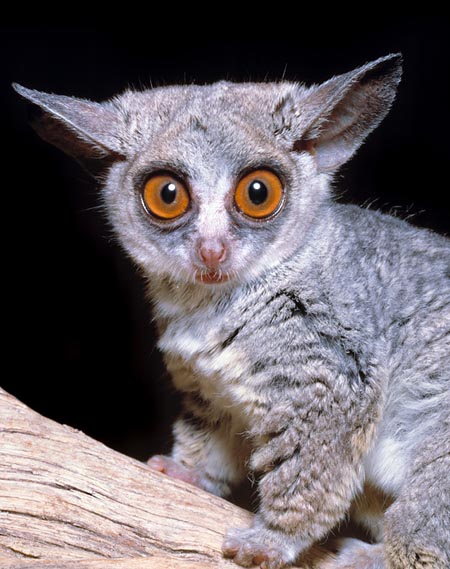 The Galago senegalensis is an endangered African prosimian © Giuseppe Mazza

The Senegal bushbaby, or Lesser galago, or Moholi galago (Galago senegalensis Géoffroy, 1796), was discovered by the great French biologist Etienne Geoffroy Saint-Hilaire during his exploration campaigns in Africa, around the end of the XVIII century.

Under the name of galago, are indicated some Prosimians (suborder Prosimia, see text Primates) typical of the African continent, which, with six species belonging to three distinct genera (Galago, Galagoides ed Euoticus), form the family of the Galagids (Galagidae).

Actually, even nowadays, the systematic of these Primates is not so clear; the debate about the family is still open at the International Commission of Zoological Nomenclature (ICZN).

The species of the three aforementioned genera cover a rather vast geographic area, corresponding to the Equatorial Africa, from east to west, and to the eastern part of central-southern Africa, till Zanzibar Island (Tanzania).

In the specific, the Galago senegalensis is at home from Senegal to Kenya, the so-called Sahelian Africa, but it may be found also in Uganda, and on the western and eastern coasts of Equatorial Africa.

Some individuals do live also in Tanzania, Zanzibar included, even if in this last case, it has been probably introduced by the man as domestic animal, as the Anglo Saxons used to do. In these locations they are still affectionately called “Bushbabies”, that is, “bushes children”, this also because when they are particularly numerous in the bush, they emit such loud cries that they seem to be children playing in the courtyard.

These very nice prosimians live in biotopes characterized by bush, thicket zones and by savannah zones, whatever edaphic or dry.

The Galago senegalensis, which as already mentioned, is a species commonly introduced in the Anglo-Saxons countries as companion animal, has a relatively small size. Both male and female, in fact, measure a maximum length of 40 cm, of which about 20 belong to the tail, per about 300-350 g of weight. The coat is brownish grey or ashy on the sides and the back, whilst the lower parts are usually yellowish of whitish. The bridge of the nose is almost always white. They have very big eyes, and a short muzzle, similar to that of the Lorisids (Lorisoidea). From the morphological point of view, the members of the genus Galago (but this applies also to those of the genera Galagoides and Euoticus), they have similar general lines which render this group homogenous in the context of the prosimians, but also lines of morphological convergency tendency, which recall the mebers of the lorisids. For this reason, their systematic is still evolving.

However, the galagids, generally speaking, and in the specific the Galago senegalensis, may be recognized from the lorisids due to the very long tail (in the lorisids, the tail is just reduced to a stump), the ears with very ample and protruding pinnae (in the lorisids, the ears, very small and rounded, can just hardly protrude from the head profile), and due to a greater development of the hind legs, which allows them a quick and agile deambulation in the bush and on the trees, whilst the lorisids are animals with quite slow movements. 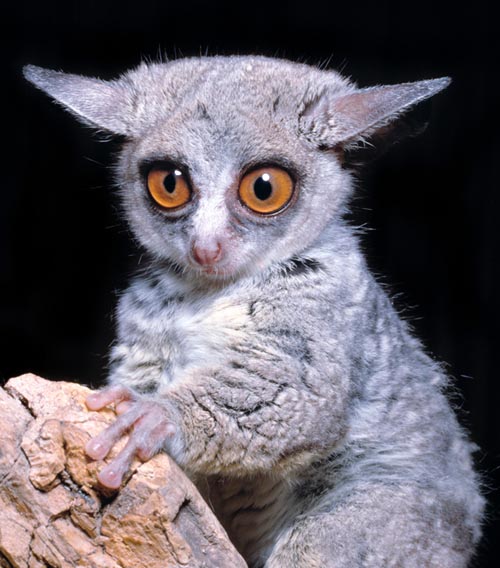 The convergent morphological lines of tendency, which render them much similar to the lorisids, are, on the contrary, represented by characters such as the round, very big, eyes, and the rounded head, with small and little protruding muzzle. These characters allow distinguishing at once the Galagidae, from the members of the greater family of the Lemuridae, which have usually rather small eyes and prominent, almost canine, muzzle. Even more marked, is the difference with the members of other families of prosimians, composed by very few species, much characterized, such as the Indriids (Indriidae), the (Daubentoniidae), and the Tarsiids (Tarsiidae).

The set of teeth of the Galago senegalensis, reflects that of its family, equivalent to that of the lorisids and the lemurids.

Usually, the females of bushbabies, as, on the other hand, those of almost all the species of promimians, deliver one baby at time, after a 4-months gestation. The cub of the Galago senegalensis till when it does not reach the self-sufficiency, remains constantly clinging to the mother’s chest, which is, in such way, free in its movements.

The Senegal bushbaby, like all other bushbabies, has nocturnal habits. It spends the day hiding in the hollow of a tree, and moves, during the night, rapidly among the branches, looking for food, formed mainly by insects. These nice prosimians may be practically considered as omnivorous, as they do not disdain also the small vertebrates, from which they love, especially, to drink the blood, and are greedy of the sweet sap of the plants and the fruits. Well known to the biologists, is known the odd and marked preference towards the alcoholic substances, which in the wild they find chiefly in form of sep emitted by the palms (the well known palm wine, consumed also, in huge quantity, by the tribal populations of Central Africa). On the behaviour point of view, extensive studies have been done since 1930 to nowadays. The British biologist Lowther, historically one of the top scholars of the Galago senegalensis in the wild, wrote about them:

“….When the Moholi bushbaby is upset, and ready to the defence or the attack, opens so much its mouth that the labial zone is very much stretched and the canines and the premolars are exposed….The eyes of the animal stand still fixed on the source of irritation, just over the head…”, from Zoologica, 25:433-462.

Since then, the biologists have become increasingly aware that the smell in this prosimian, and, more generally, in the members of the family of the Galagidae, has a primary importance. During the seventies, the biologists thought that the morphological proof of this behavioural dependency from the smell was rightly located in a very developed olfactory lobe, characteristic common with less developed mammals.

They said, in fact, that “… the Galago senegalensis and the other lorisiforms, as well as the lemurs, are curious as the monkeys, but unlike these ones, they manifest their curiosity by sniffing at the object, instead of grabbing it to observe it or of touching it even with the mouth …”.

By now, starting from the 1940 Lowther’s works, the ethological biologists, have classified eight different types of call in the Galago senegalensis : 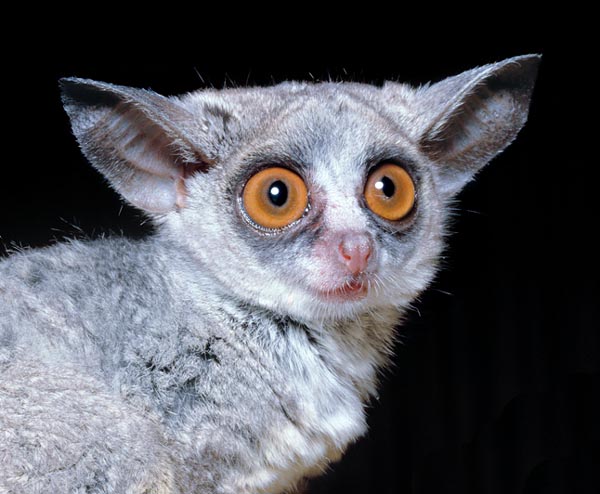 Omnivorous, loves nectar, but also blood and the alcoholic sap it gets from the palms © Giuseppe Mazza

– Alarm call. It is a high-pitched shriek, starting like that of the eastern pania, even if more squeaky, but ending in a whistle and keeps the group in calm full of scare.

– Automatic cry. Its cause and function are unknown it may last for one hour. It is a penetrating sound, with two tones, high and low. While producing it, the animal does not stop its activity, going on in eating and leaping. The other members of group are not affected at all.

– Sound similar to a brooding hen. But on a lower register: the animal emits it when bored.

– Sexual call. It’s the one utilized by the male while seeking the female. It is a sweet, researching, cry composed by two notes.

– Conversation. When they are separate, the male and the female call each other: milder than the sexual one, it has however, the same two tones, high and low.

– Female twittering. It’s emitted for expressing noise due to the excessive attentions of the male.

– Maternal call. It is very sweet and delicate, utilized by the mother in the nest with the cub.

– Cry of the baby. It recalls the squeaking of the mouse. It might be defined as an “acute twittering”.

The sexual behaviour may be resumed in this way: The female accepts the male only when in heat, period which may mast five-six days. During this phase, it has a colourless shedding which excites the male quite a lot, who will start sniffing continuously the female genitalia and leaking her, just before the mating. During the time of sexual arousal, the copulation has been observed to happen three-four times per night and even by the morning, when normally the should be sleeping. During the long pauses among the excitement phases, the male continues to approach its partner, who, however, will reject it. When in captivity, when it follows her in the cage or in the compound, a sweet and melancholic call may be heard. This is defined by the zoological biologists, as the “research sexual call”.

At times, the female merely jumps in front of the male and does not appear disturbed by its too many attentions, but if these ones prolong too much, by the end she turns toward it so much furiously, that the male will assume a position of alarm. Usually, however, once formed, the pairs are stable and close-knit. They may be often seen perched side by side, also while washing each other, fighting for fun, or even while the embrace and rub their noses.

The temper of the female is even more vehement towards the partner during the pregnancy. The Dutch biologist Ilse observed the famous stereotypical behaviours of micturition (urination). Often, the male drops a small quantity of urine, while walking, rhythmically raising and lowering the pelvis; or it urinates on one hand which is then rubbed against the foot of the same side. Ilse did put forward the hypothesis that both forms of urination were used for indicating its presence. In the first instance, it should mark horizontally the locations, in the second, vertically, on the trunks of the trees.

The IUCN states that both the Galago senegalensis, as well as all the species of the family of the Galagidae, are at very serious risk of extinction and they are to be protected in every possible way.