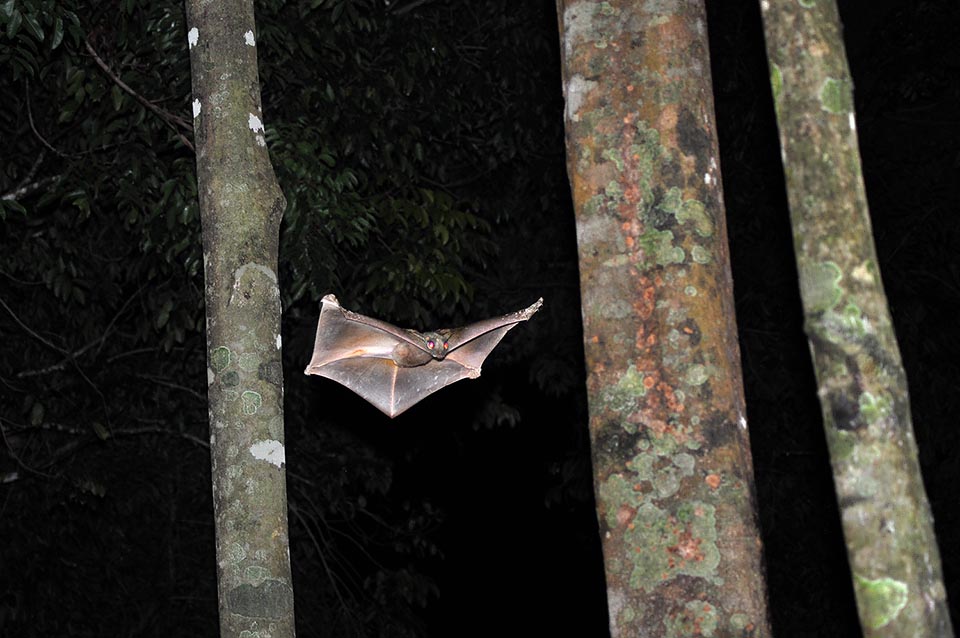 Once inserted in the Primates and still known as flying Lemur, Galeopterus variegatus presently belongs to the Cynocephalids, only family of the order of the Dermopterans © Dzulhelmi Nasir

That of Flying lemur is one of the names with which are improperly indicated the Sunda flying lemur (Galeopterus variegatus Audebert, 1799) and the Philippine flying lemur (Cynocephalus volans Linnaeus 1758), species living in South-East Asia and presently only extant members of the order of the Dermopterans or Galeopiteci.

This is a small order of Eutherian Mammals, originally inserted in the Primates among the Prosimians by Linnaeus (1758), then into the Chiropterans by Cuvier (1798) and later on among the Insectivores by Wagner (1859). At present, the Dermopterans are considered as a distinct order (Illiger, 1811) of which survives only the family of the Cynocephalids (Cynocephalidae), so called as having the head recalling that of a dog and to which are ascribed two genera Galeopterus and Cynocephalus, each with only one specie vulgarly known with the name of Flying lemurs. 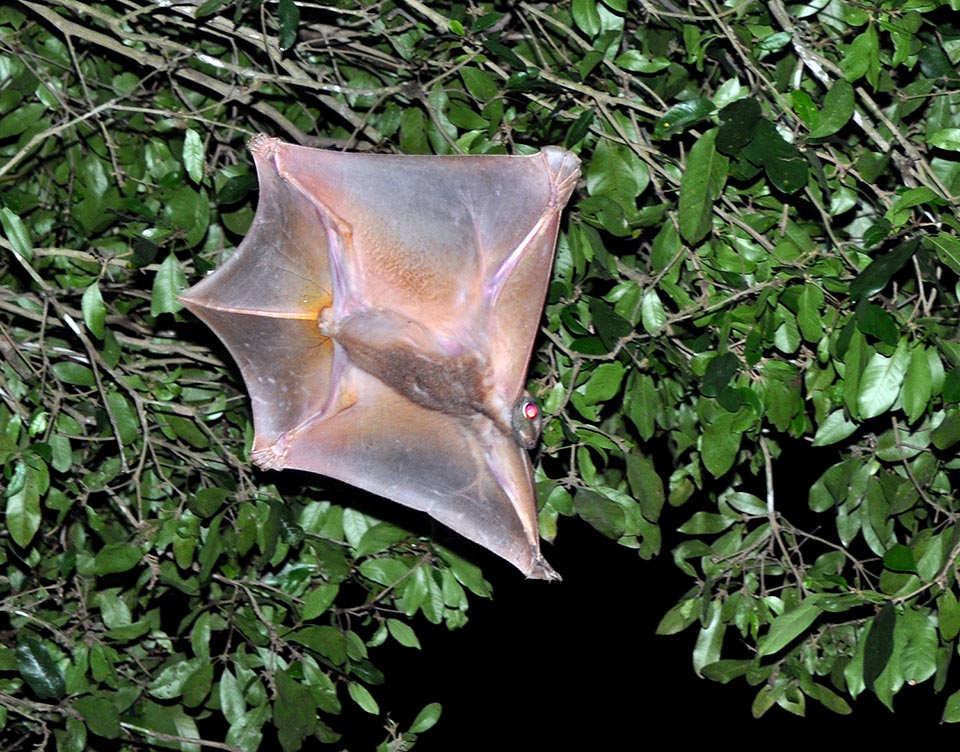 Of crepuscular-nocturnal habits, lives in South-East Asian forests, where it can move gliding between trees up to 100 m far, with partial loss of altitude © Dzulhelmi Nasir

But despite the common name of lemurs, the two species are more similar to the Chiropterans than to the Prosimians to which in any case they can be approached, together with the Insectivores, because of some characteristics of their anatomical structure. 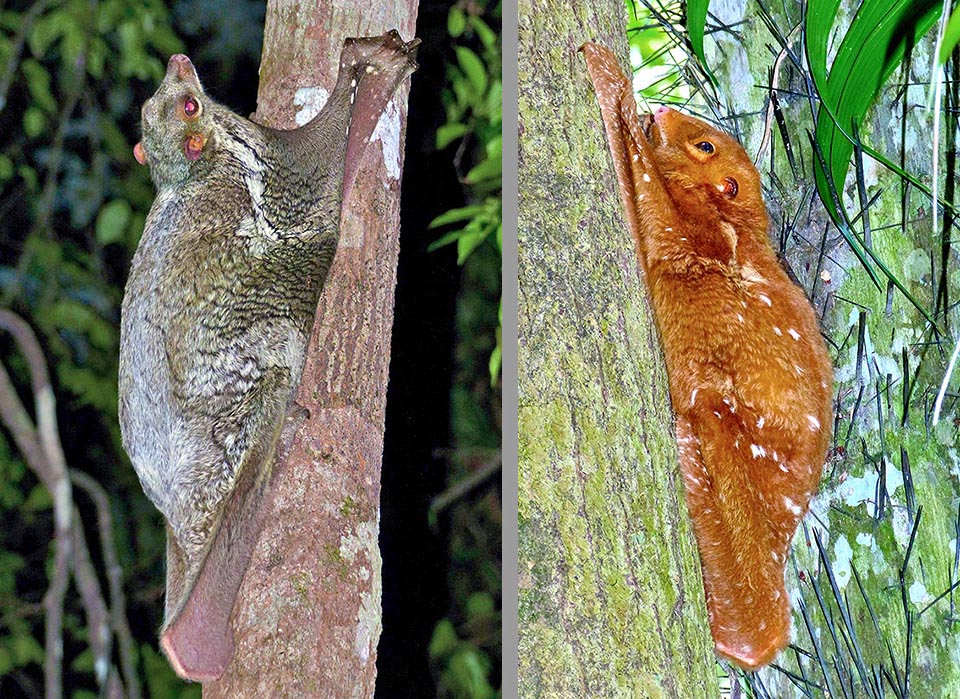 Moreover, it is also an excellent climber. It lives alone or in small groups that communicate with sharp cries. Right, a male with reddish fur © Bernard Dupont

Recently, following molecular and morphological data and mainly on the basis of their presumed geographical isolation and consequent genetic divergence, some specialists see in the populations of Congo and of Sunda three distinct species inside the genus Galeopterus.

Some specialists hypothesize that the species of the genus can even be splitted in six, without ever clearly indicating on the basis of which concrete elements of distinction. Therefore here we still consider insufficient the acquired data concerning the specific and subspecific splitting of this genus. 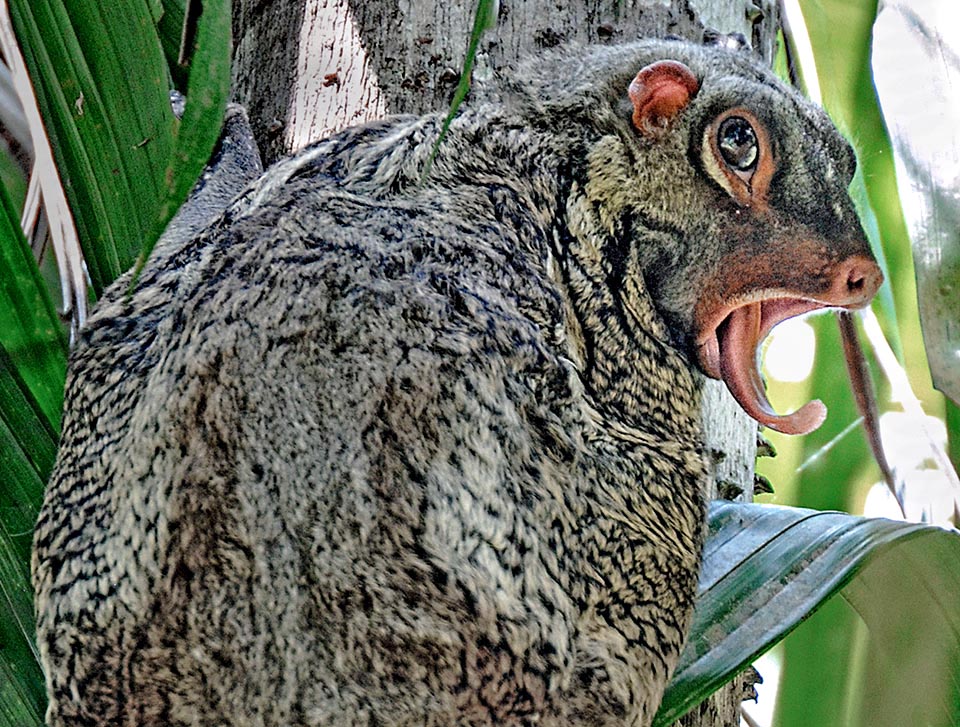 As big as a cat, it eats tender leaves, buds, flowers, fruits, resin, sap and small insects seized with its tongue that serves also to drink licking the water among the branches © George Beccaloni

The Sunda colugo (Galeopterus variegatus Audebert, 1799), known also with the name of Malayan colugo, is amply diffused in south-East Asia, from Thailand to peninsular Malaysia, from the island of Java to that of Borneo, Sumatra and good part of the Philippine archipelago.

The Sunda colugo has the size of a cat, 32-42 cm long with a weight of about 1-1,5 kg; the males are slightly smaller than the females. The head is ample with tapered caniniform snout that reminds that of a bat. 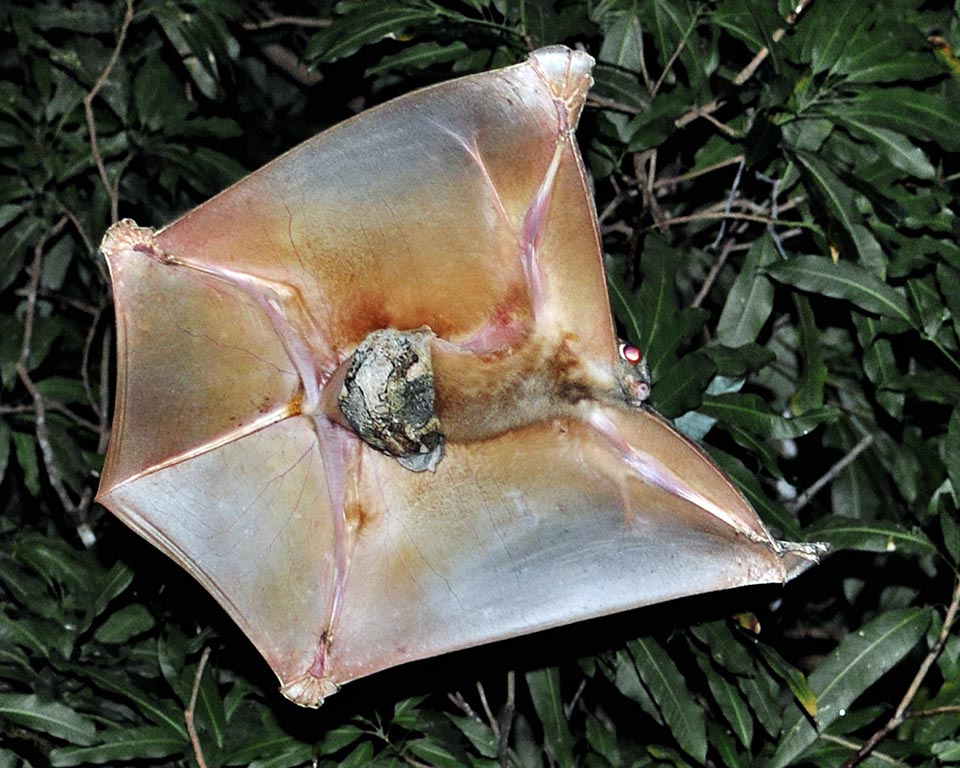 The eyes, decidedly facing forward and surmounted by big eyebrows, are large in relation to the nocturnal habits; the ears are small and rounded and remind those of a bat. The mouth has wide and long tongue and is armed with 32 teeth, with the canines like the premolars and the lower incisors, shaped like a comb, that are used for filtering and grooming. The upper part of the jaw looks toothless as the upper incisors are implanted on the sides of the jaw itself, so as not to hinder the lower incisors that protrude forward.

The tail is well developed and can reach almost the length of 30 cm. The fur is thick and spotted with a mimetic effect, ventrally clear, of colour varying from white to grey, black, red on the dorsal parts; mre frequently, the fur of the males is of reddish colour, the females’ one is greyish. 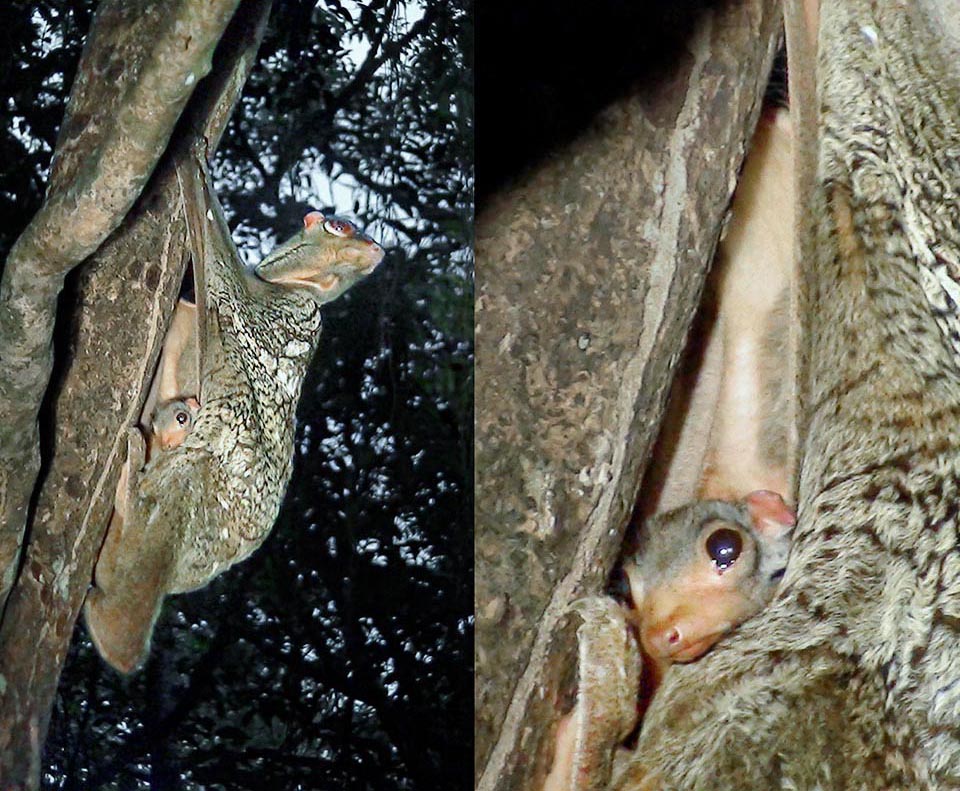 The fur is mimetic. The kid, enlarged to the right, is perfectly at ease. When it is hungry are present two breasts in axillary position © Dzulhelmi Nasir

The males have extraddominal testicles contained in a scrotum and the females are equipped with a pair of breasts placed in an almost axillary position. The limbs are long and of equal development with fingers flattened and provided with curved claws; the feet have palmate toes and the soles may form suction disks that allow a better grip on the trunk while climbing.

Like the only other species of the order, the Philippine colugo or Philippine flying lemur (Cynocephalus volans Linnaeus 1758), the Sunda colugo has an ample patagium, skin duplication covered by hairs extending from the neck up to the tip of the fingers and toes of hands and feet and up to the tail, that may be extended in the shape of a kite up to about seventy centimetres thanks to an extensor muscle. 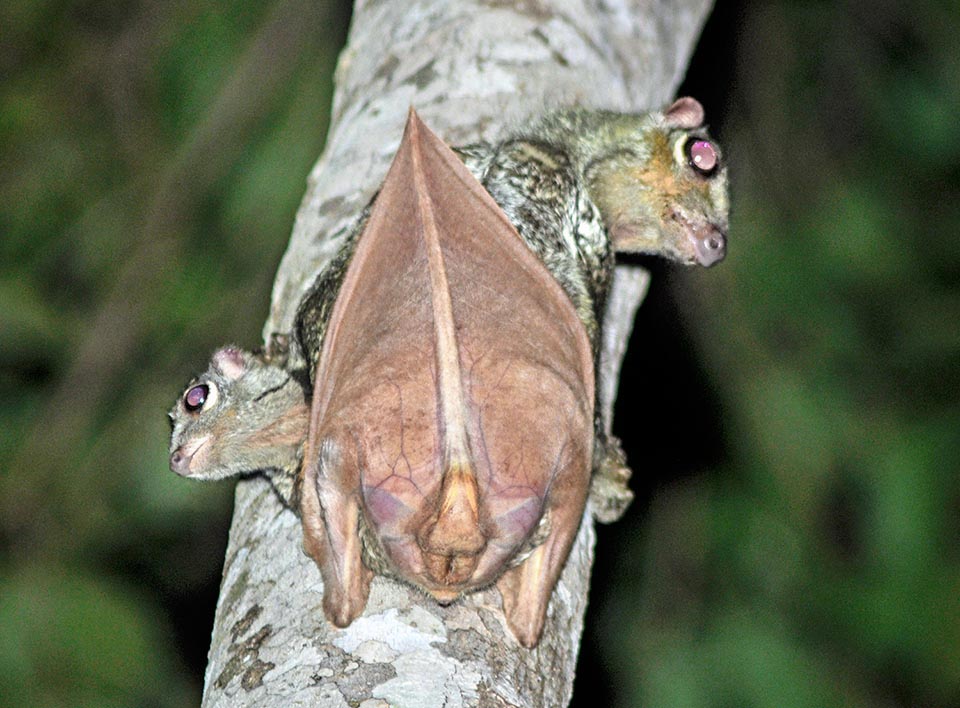 A bigger pup. The female, who has raised the tail, seems to have two heads. It climbs moving laterally on the trunk marking with urine its zone © Dzulhelmi Nasir

This is a structure that allows these animals to glide soaring from one tree to another, covering distances up to even 100 m with only a partial loss of altitude.

The Colugos patagium is more developed than other gliding Mammals, such as the flying squirrels of the genus Petaurista among the Rodents and some Marsupials such as the Sugar glider (Petaurus breviceps Linnaeus 1758) and the species of the genus Anomalurus.

Here it may be bent to form a sort of pouch where the pup gets protection and heat and where it is placed when the mother goes gliding between the trees. 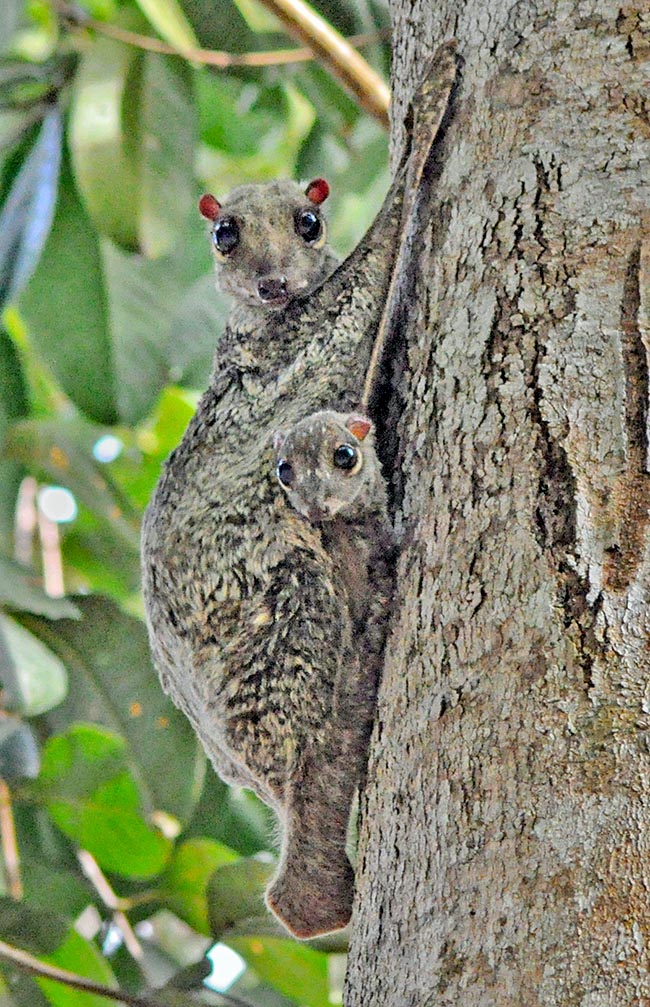 The bond mother and child is very close and weaning happens, after 60 days of pregnancy, around the 6 months. The frontal eyes seem to evoke, evolutionarily speaking, some kinship with the Primates © Dzulhelmi Nasir

The Sunda colugo lives chiefly in pluvial forest environments; it is found also in secondary forests, in the banana, coconut and rubber tree plantations and even in the gardens close to houses.

The diet is mainly based on tender vegetables, such as leaves, buds, flowers and fruits, resin and sap; even if, rarely, these animals also eat insects. While feeding, the tongue can be also utilized for licking the humidity or for catching insects, like ants, and other invertebrates.

These animals rarely leave the arboreal environment and do not get down in the pond, in the river or in the brook to drink, but satisfy their thirst licking with the tongue the water or the humidity from the leaves, from the bark of the tree where they live and also from mosses and lichens covering its trunks and branches.

Excellent climbers, whilst on the soil they are clumsy and slow in movements, the Colugos are exclusively arboreal and of crepuscular and nocturnal habits and spend the daytime sleeping hanging up with their legs on a branch upside down as the bats do, or inside holes of the trees.

The Colugos carry on a mainly solitary life but can also unite in small groups. It seems that they do not have the sense of the territoriality, excepting for resting and foraging areas; however, in this regard has been observed a behaviour considered to be marking done by means of the urine that is distributed on the trunk of the tree while the animal climbs laterally.

The Colugos communicate with each other with sharp and unpleasant cries. Recent observations on the behaviour of the Galeopterus variegatus in the Bako National Park (Sarawak, Malaysia) have highlighted that this animal produces a series of creaks and noises representing vocalizations attempts, attributable to various types of behaviour.

They can mate all over the year and the females, after a gestation lasting 60 days, deliver only one pup that is weaned when 6 months old and reaches the maturity when about 3 years old; the care of the pup is entrusted to the mother who provides to carry it attached to its own abdomen and to protect it and to warm it up keeping it inside the pouch formed by folding up the patagium.

The species, seriously threatened by several anthropic activities, in particular the hunting for the flesh and the fur and the loss of habitat due to the deforestation, in Malaysia is however protected by a series of national laws, such as the Wildlife Protection Act 1972 (federal law), Wildlife Conservation Enactment 1997 (Sabah state law) and the Wildlife Protection Ordinance 1998 (Sarawak state law). 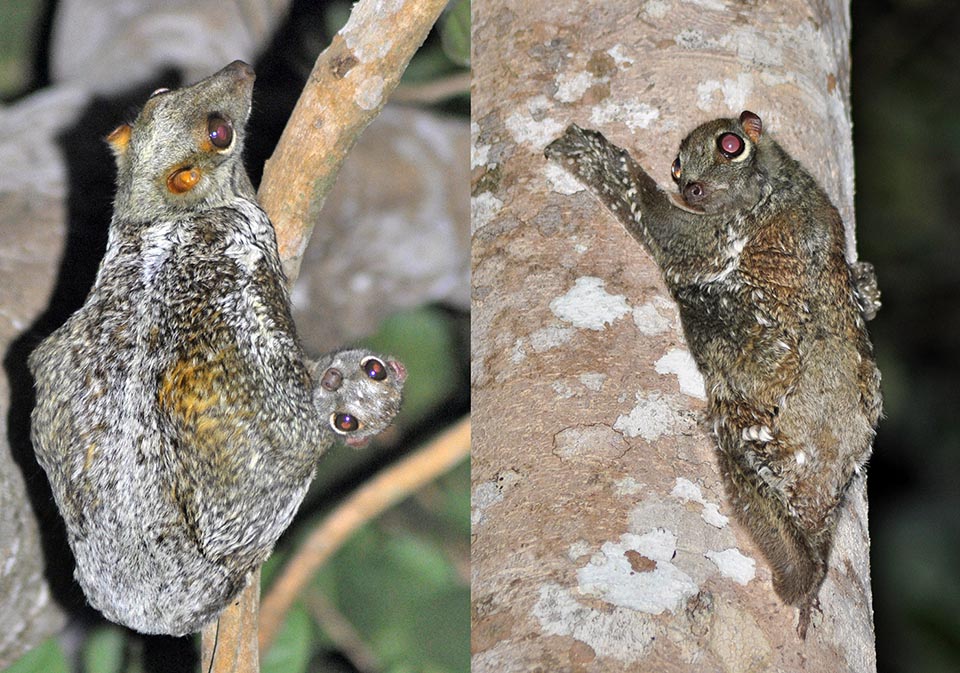 Galeopterus variegatus can reproduce all year round. Right, a young learning to move on the trunk © Dzulhelmi Nasir

At the state, even if the Colugos are considered at low risk, well founded concerns do exist that the ineffective application of the law and the lack of consciousness between the inhabitants of the local villages may represent real factors of risk that can contribute to the drastic decline of these animals.

The other species of flying Lemur, the Philippine flying lemur (Cynocephalus volans), is limited to the plain and mountain zones of the southern parts of the Philippines.

It distinguishes from the previously described Sunda flying lemur having slightly lower dimensions and for having the fur of a darker colour and less mottled. The head is big and resembles that of a dog, hence the scientific name of the genus and of the family: the eyes are particularly big and the ears are small and rounded. The females usually deliver only one pup, exceptionally two, after a gestation lasting about 105 days. The kid is carried by the mother until weaning.