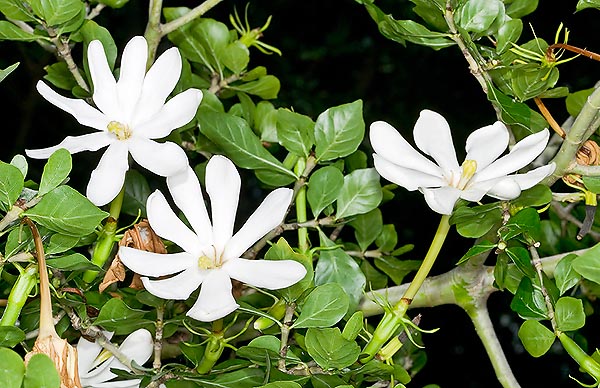 The genus is honoured to the Scottish physician and naturalist Alexander Garden (1730-1791), who spent a good part of his life in South Carolina, studying local fauna and flora; the Latin name of the species “cornuta” = provided with horns, is seemingly referring to the long lobes of the calyx, which persist on the fruit.

Shrub or small tree, tall up to about 5 metres with a whitish trunk, much ramified, with sparse horns on the branches; the leaves are generally disposed in verticils (three per each node), of a glossy intense green colour, of a rather variable shape, from obovate to elliptic, long up to about 15 cm. The flowers are terminal or axillar, solitary, perfumed, of a white, tending to cream, colour, about 8 cm broad, on a long corolla tube (about 7 cm). Almost ovoid fruits, about 6 cm long, woody, of glossy yellow colour when ripe, containing several flat and woody seeds.

In spite of the undoubted ornamental characteristics, represented by the foliage, the large white, intensely perfumed, flowers and by the rather showy fruits which last for long time on the plant, this one is not very often found in cultivation. The plant has a preference for an exposition in full sun and well drained soils and can be cultivated in open air in mild climate locations, where the temperatures of few degrees under 0 °C are of a short lasting duration. It is suitable also for the cultivation in pot.