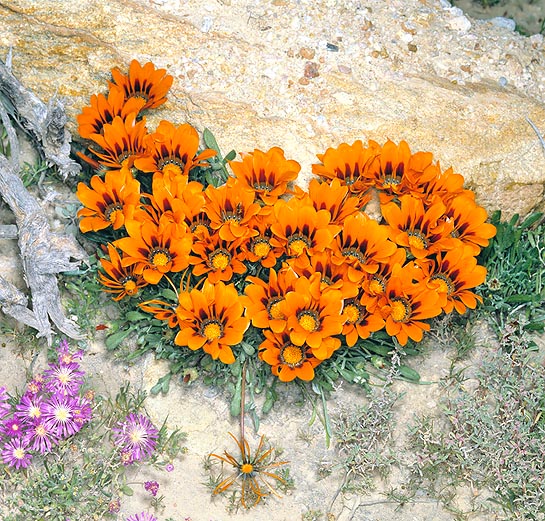 Gazania pectinata in its habitat, among spring blooming in Namaqualand © Giuseppe Mazza

The plant is native to South Africa, particularly to the south-western zone of the Western Cape Province, where it grows along the flat coastal zones and on the slopes up to 900 m of altitude on rocks or on stony and sandy soils.

The genus is honoured to the Byzantine humanist and translator Theodorus Gaza (ca. 1415-1475) who translated in Latin Theophrastus’ work about botany; the name of the species comes from the Latin verb “pectere” = to comb, with reference to the shape of the leaves.

The Gazania pectinata (Thunb.) Spreng. (1826) is an annual herbaceous plant, or short lasting perennial, acaulous, cespitose, up to 20 cm tall, with a tuft of entire basal or pinnate leaves, with thin or elliptic lobes and curved margins, covered by a white tomentum underside.

The solitary inflorescence, on a hairy peduncle 15-20 cm long, is the typical flower-head of the Asteraceae, formed by a crowd of sessile flowers spirally inserted on a roundish base, the receptacle, surrounded by a campanulate involucre formed by a double series of bracts, the outer being about 1 cm long, the inner ones thin and 1,5 cm long.

The flowers of the outer ring, called ray florets, about 3 cm long, have the corolla formed by five yellow or orange petals merged together, with a dark dot on the base; these flowers are sterile and have the function to attract the attention of the pollinator, like the petals of a single flower. 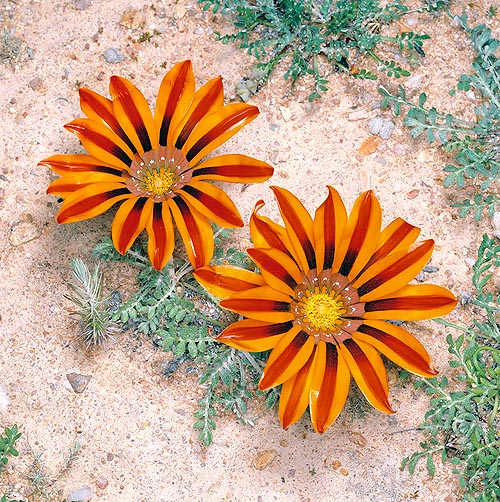 Inside the ring are the fertile flowers, called disc florets, with tubular corolla with five orange lobes.

The fruits, containing one seed only, and called achenes (or, more precisely, cypselae) in the Asteraceae, about 5 mm long and 1 mm broad, are covered by long hairs and surmounted by the pappus, the modified calyx of the flower, formed by a crown of long whitish hairs; the pappus has the function to help the dispersion of the fruits.

It easily reproduces by seed, which germinates quickly (in about one week), in spring, or in winter in a sheltered location at a temperature standing between 16° and 20° C; it is possible to proceed also by tuft division.

Very ornamental plant due to its great, brightly coloured flowers, is to be cultivated in full sun (the flowers do not open in the shade), on much draining soils, even poor and calcareous, with a preference for the sandy ones.

It is particularly suitable, as soil coverage or for flower beds, for the Mediterranean type climates thanks to its resistance to the dryness and the very poor exigencies of cultivation.

It may be cultivated in pot in particularly draining and aerated substrata, watering must be moderate in summer, reduced in winter, avoiding stagnations which may be deadly at the low temperatures.