The plant is native to southern Africa (Mozambique and South Africa), where it grows on the dunes or the coastal rocks.

The genus is honoured to the Byzantine humanist and translator Theodorus Gaza (ca. 1415-1475), who translated in Latin Theophrastus’ work on botany; the name of the species is the Latin word “rigens” = rigid, with possible reference to the rigid hairs covering its fruit.

The Gazania rigens (L.) Gaertn. (1791) is a perennial, herbaceous plant, 15-20 cm tall, with creeping standing, with stems at times ramified, long up to about 40 cm, which, time passing, tend to become semi-woody. It has alternate, close, simple leaves, with obovate shape, up to 10 cm long and 3 broad, or pinnate with obovate leaves, covered on the upper and lower sides by a thick whitish pubescence.

The solitary inflorescence, of about 4-5 cm of diameter, on an erect, 10-15 cm long peduncle, is the typical flower-head of the Asteraceae, formed by a crowd of sessile flowers spirally inserted on a roundish base, the receptacle, surrounded by a bell-shaped involucre covered by a white tomentum. This involucre, 1 cm long and with a diameter of 1,5 cm, is formed by a double or triple series of united bracts, but the apices which are free and pointed. 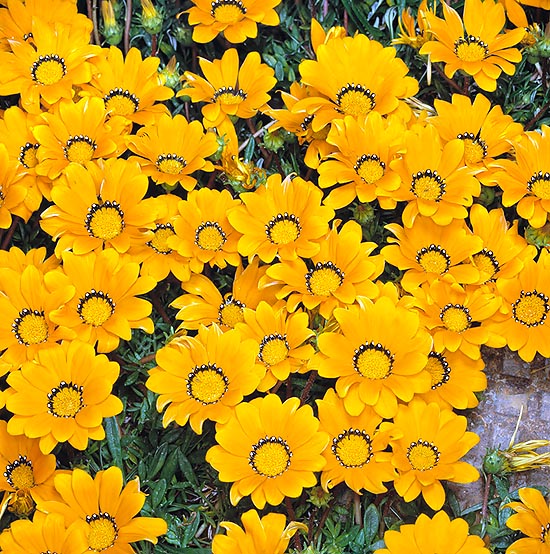 The first Gazania introduced in Europe. It bears saltiness but doesn’t bloom in the shade © Mazza

The flowers of the outer ring, called ray florets, are about 2 cm long and have the corolla formed by five petals joined together, of a luminous yellow colour. The ray florets are sterile and have the function to attract the attention of the pollinator, like the petals of a single flower. The fertile flowers, called disc florets, are placed inside the ring, and have a 5-lobed tubular corolla of a bright yellow colour.

The fruits, containing one seed only and called achenes (or, more correctly, cypselae) in the Asteraceae, are club-shaped, about 5 mm long, of yellowish brown colour and completely covered by long and rigid hairs. The pappus, the modified calyx of the flower, surmounting the fruit, is formed by a double crown of small 2-3 mm long scales concealed by the long hairs; the pappus, and even more the hairs, in the case of the fruits of the Gazania rigens, has the function of helping their dispersion. The Gazania rigens var. rigens, known only in cultivation, differs for the leaves, which are glabrous on the upper side, the flower-heads, up to 8 cm of diameter and the yellow ray florets with a black dot at the base. Several varieties have been selected and it has originated various hybrids. It easily reproduces by seed, in winter, in sheltered locations with a temperature of 16-20° C, or directly in place in spring, by cutting and by tuft division in summer. It easily disseminates and in favourable climates and locations, it may easily naturalize escaping from the cultivation.

It has been the first gazania introduced in cultivation in Europe (1755), getting at once a great success due to its long lasting blooming, the bright yellow colour of the flowers, the adaptability and the few exigencies of cultivation. It may be utilized in full sun (the flowers do not blossom in the shade), as soil cover, for edges and flower beds, alone or associated with other differently coloured gazanias and in rocky gardens; its resistance to the salty aerosols render it ideal for coastal gardens. It adapts to whatever type of soil, even if poor, provided perfectly draining; it may bear long drought periods and high and low temperatures, these last as low as about -10° C, in dry climates; its fast growth and the precocity of blooming allow its cultivation as annual in less favourable climates, in particular those with cool and wet winters. It adapts to the cultivation in pots and in small cases, even if hanging, on particularly draining and aerated substrata; watering must be moderate in summer, almost stopped in winter in order to avoid stagnations which may reveal lethal.

It is subject to few diseases, among which stand the powdery mildew and the rottenness caused by Botrytis cinerea, Sclerotinia sclerotiorum and Rhizoctonia solani in presence of high humidity and low temperatures.