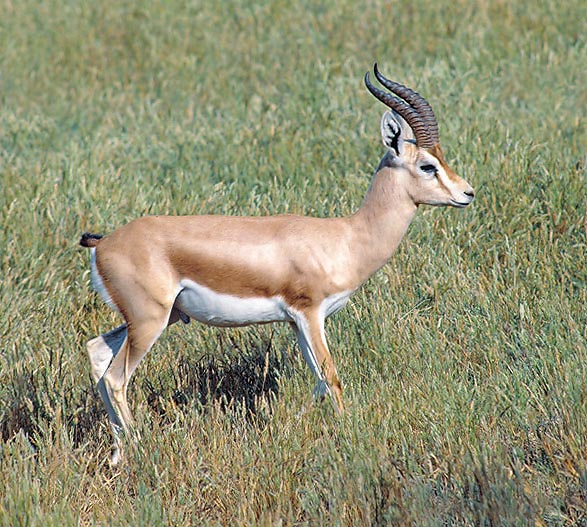 A Gazella dorcas male. If injured or surrounded it may be aggressive © Giuseppe Mazza

The Dorcas Gazelle (Gazella dorcas Linnaeus, 1758, family Bovidae), is the prototype of the gazelles, the one which has given its name (Arabic) to all the others, also because, being common in North Africa, it was known since the ancient times.

Artiodactyl (Artiodactyla) of modest size and of light structure, is rather common and diffused all over the North African from west (Mauritania, Morocco), through Tunisia, Algeria, Libya, Egypt, up to the Arabic peninsula and Israel. More south, it goes into the Sahél, up to the northern mart of Chad, Niger, Nigeria and Sudan. Once, it was probably present till Iraq.

It is an antelope well adapted to the steppe and desert, or sub-desert, habitat with a height at the shoulder varying from the 55 to the 65 cm and weights in the order of the 15-25 kg.

The colour of the coat is light reddish or beige, or sand, but, at times, it tends definitely to the fawn, whilst the ventral parts and the thighs are white. In the transition point between the white of the belly and the beige of the sides, there is always a more marked red stria, running almost horizontally from the junction of the fore limbs to that of the hind ones. This stripe extends then on the back quarters, all around the white of the thigh. Around the eye there is a sort of “white spectacles” whilst, starting from the fore corner of the eye, there is a dark and thin stripe running towards the apex of the muzzle; furthermore, almost always there is a clear triangular fawn dot, with bas placed between the emerging point of the horns and with apex on the back of the muzzle, but which does not reach the nose, almost white (but the nares, which appear black).

The ears are long and tapered, often arcuate. The old males often have an odd cutaneous fold at the level of the muzzle. The horns are present in both sexes and are lyre-shaped, distinctly ringed, with an average length from 15 to 25 cm, but with an ascertained record of 32,39 cm for the subspecies Gazella dorcas litoralis, typical of the coasts of the Red Sea, Eritrea and Sudan (Kassala). Another subspecies, diffused in northern Abyssinia and in Sudan, is the Gazella dorcas isabella, or Isabella’s gazelle, with a lighter colour of the coat. 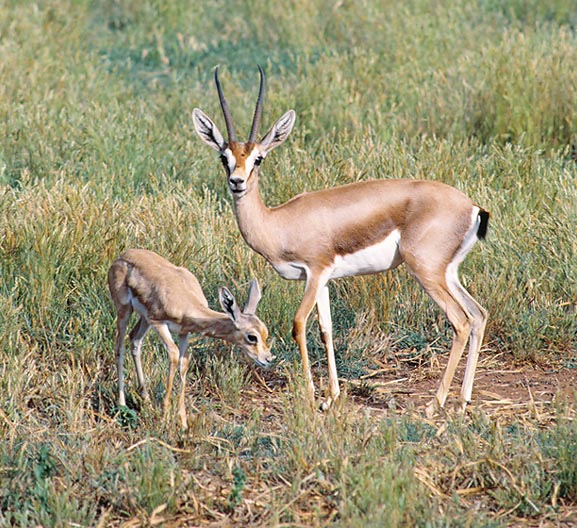 Being an animal adapted to the desert, it dose not depend on the water, as it may get the liquids needed from the vegetables, however, when possible, it willingly goes to drink, furthermore, like other desert species (please see the text Oryxes), it adopts other strategies for surviving, among which minimum dispersions of liquids, night activity, wise use of the little shade available, etc.

It performs great displacements, reaching areas where it has been raining and where the new grass is present and at times, in such zones, big concentrations of animals may be found.

The adult males are territorial and mark and delimit their territory with heaps of faeces shaped like small balls, of less than one centimetre of diameter, quite often digging with the front limbs or urinating on the faeces. Even if provided of pre-orbital glands, it does not seem that these are utilized for marking the territory.

The sound signals consist essentially in an alarm cry, which resembles to the cry of a mallard: this sound is emitted by insufflating the air from the lungs into the nose, which swells visibly, like a balloon, even if not so markedly as in the Speke’s gazelle.

The food is varied, depending on the miser habitat and strongly conditioned by it, for this reason it goes from the acacia leaves to the tasty ones of some succulent plants (precious sources of liquids), to tubers, often dug with the legs, to fruits and berries, also herbs, often coriaceous and dried. When they are alarmed, these gazelles may run with a speed of more than 60 km per hour, often doing the “stotting”, leaps done with rigid legs, possibly for confusing the predator. Depending on the abundance or lack of resources, the Dorcas gazelle may live in couple or in familiar groups, often formed by a male, some females and young individuals. 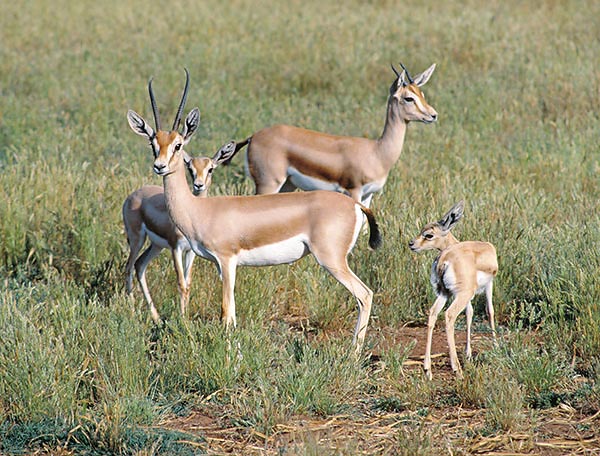 The mating season occurs usually during the winter months, and, after about 180 days of gestation, the female delivers a cub (rarely two), which after a couple of hours is already capable to stand up, even if usually, during the first days it keeps hiding, for what the habitat may consent, in a hole of the sand or under a bush, while the mother keeps in proximity. Defence from predators: the speed is the most utilized weapon, but the Dorcas gazelle is a fighting animal, like the male of the bushbuck, and there are instances of persons killed by the sharp horns of an injured or surrounded animal.

Usual predators are the cheetah (where present), the caracal, the serval and the leopard, but there are cases where, especially for what concerns the minor felines, the antelope tries, successfully at times, to defend actively.