Geraniums like small trees: skilfully pruned to form a stalk

Can even be over one meter high, they have a straight trunk overflowing with flowers at it’s top. The best ones are in the “ zonal ” and “ ivy ” groups. How to create and keep them. 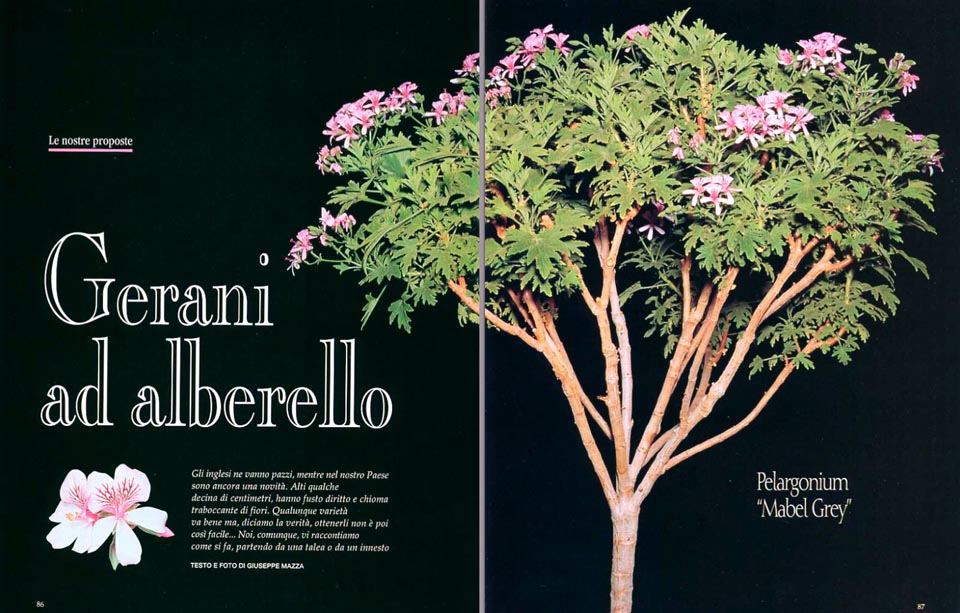 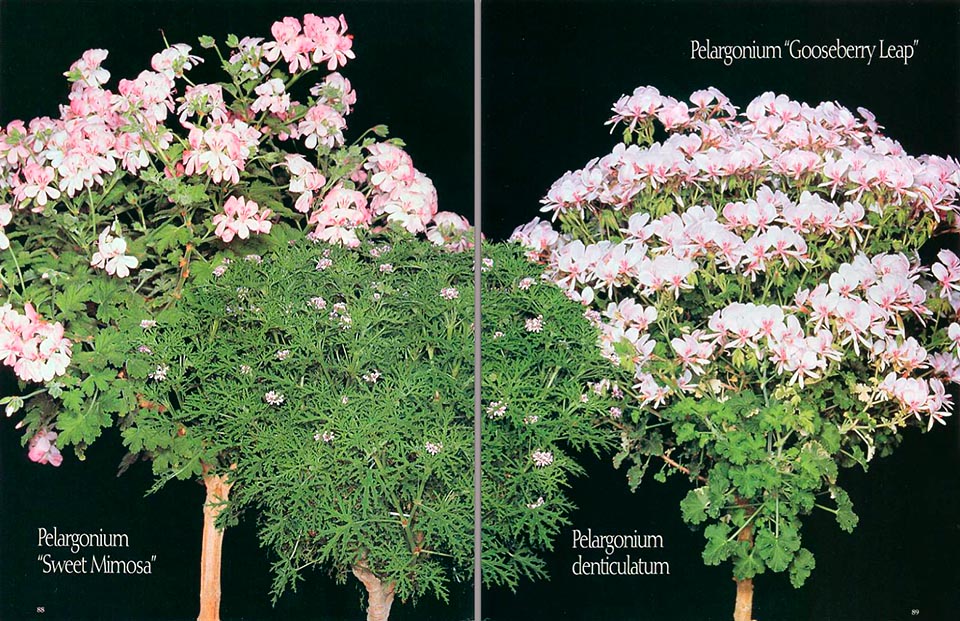 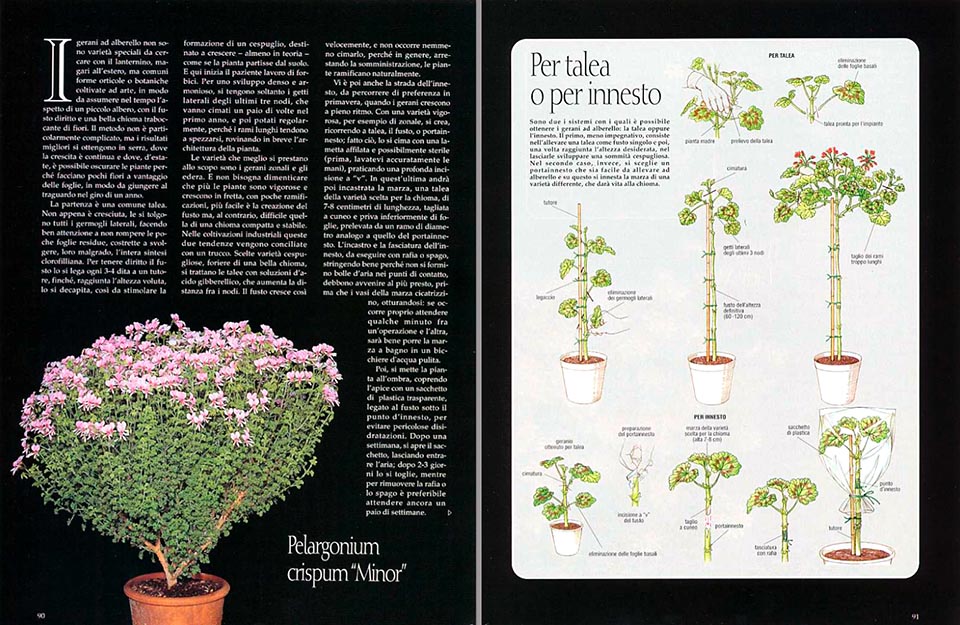 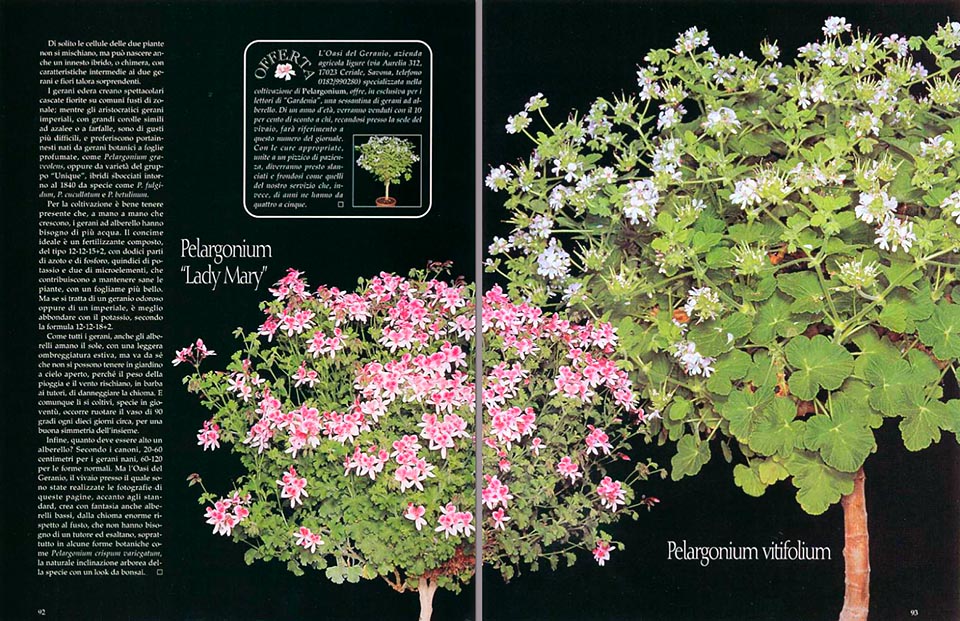 The “sapling” geraniums are not special varieties to search high and low, perhaps abroad, but common horticultural or botanical forms, cultivated expressly, in the way to assume with the time the appearance of a small tree, with a straight stem and a nice foliage overflowing of flowers.

The method is simple and well within everyone’s grasp; but the best results are obtained in greenhouse, where the growth is practically continuous, and, overshadowing the young plants in summer, in order that they make less flowers to advantage of the leaves, it is possible to get at the finishing line in one year’s time.

The departing point is, as always, a cutting. We cuddle it, but as it grows, we have to take off, with the proper excuses, all the lateral sprouts, paying attention not to break the few remaining leaves, obliged to carry out, unwillingly, the whole chlorophyllous synthesis.

In order to keep vertical the stem, we have to bind it up, every 3-4 fingers, to a support, till when, reached the desired height, we shall behead it, thus stimulating the formation of a bush, intended to grow up, theoretically, as if the plant should start from the ground.

For a dense and harmonious growth, we must keep only the lateral shoots of the last three nodes, which must be polled a couple of times during the first year, and then, lopped on a regular basis, because the long branches have the tendency to break, thus spoiling in short time the architecture of the plant.

The most suitable varieties for this purpose are the “zonal geraniums”, and the “ivy” ones; and we have not to forget that, more the plants are vigorous and grow up rapidly, with few ramifications, the simpler is the creation of the stem, but, later, more difficult will be to give a firm and stable form to the head.

Industrially, these two trends are conciliated with a “trick”. Once chosen bushy varieties, heralding a nice head, we treat the cuttings with solutions of gibberellic acid, which increases the distance between the nodes. The stem, in this way, grows up fast and there is not even need to poll it, because, generally, after stopping the administration, the plants ramify naturally.

Then, there is also the way of the grafting, which is to be done preferably in spring, when the geraniums grow up at full pace.

With a vigorous variety, for instance, a “zonal”, we create, as usual, the “stem”; and after having washed well our hands, we poll it with a sharp blade, possibly sterile, making a deep “V” cut.

On this “saddle”, we then insert the “scion”, a cutting of 7-8 cm of the variety chosen for the head, cut with the same angle, wedge-shaped, from a branch of analogous diameter without laves below.

The joint and the dressing of the graft, well tightened with raffia or twine, in order to avoid the formation of bubbles of air in the points of contact, must occur as soon as possible, before the vessels of the scion do heal, getting obturated, and if it is really necessary to wait for some between one operation and the other, it is then wise to place the cutting to soak in glass of water.

Then, we have to place the plant in the shade, covered on the apex by a small bag of transparent plastic, tied up on the stem under the position of the graft, to avoid dangerous dehydrations.

After one week, we have then to open the bag on the bottom for a progressive contact with the environment; and it is to be taken off after 2-3 days, while for removing the raffia or the twine, it is better to wait for a couple of weeks more.

Usually, the cells of the two plants do not blend, but a “hybrid graft”, can come to life, with intermediate characteristics of both the geraniums, and sometimes surprising flowers.

The “ivy geraniums” create spectacular flowery cascades on common stems of “zonal”; while the aristocratic “regal geraniums”, with huge corollas similar to azaleas or butterflies, have more difficult tastes, and prefer supports born from “botanical geraniums with fragrant leaves”, such as the Pelargonium graveolens, or from varieties of the group “Unique”, hybrids blossomed around the 1840, from species like the Pelargonium fulgidum, the Pelargonium cucullatum, and the Pelargonium betulinum.

For the cultivation, it is better, anyway, to keep in mind that, while they grow up, sapling geraniums are, of course, in need of more water.

The best manure is a compound of the type 12-12-15-2, that is with twelve parts of nitrogen and phosphorus, 15 parts of potassium, and two of micro elements, which contribute to keep healthy the plants, with a better foliage.

But if it’s matter of a royal geranium or a fragrant, it is better, then to abound in the potassium, following the formula 12-12-18-2.

Like all geraniums, also the “saplings” love the sun, with a light summer shading, but it goes without saying that they cannot be kept in the garden in the open air, because the weight of the rain and the wind, which risk, in spite of tutors, to take off its head.

And no matter how they are cultivated, especially when young, it is necessary to rotate the pot of 90° every ten days, for a good symmetry of the whole.

How much will be sapling tall?

According to the rules, 20-60 cm, for the miniature geraniums”, and 60-120 cm, for the normal forms. But the Floriculture Giorgi, apart the “standard”, creates, with fantasy, also low saplings, with an enormous head if, compared to the stem, which, obviously, do not need a tutor, and exalt, in some botanical forms, with sweet-smelling leaves, such as the Pelargonium crispum variegatum, the natural arboreal inclination of the species with a bonsai look.

Geraniums like small trees: skilfully pruned to form a stalk was last modified: May 23rd, 2019 by Giuseppe Mazza