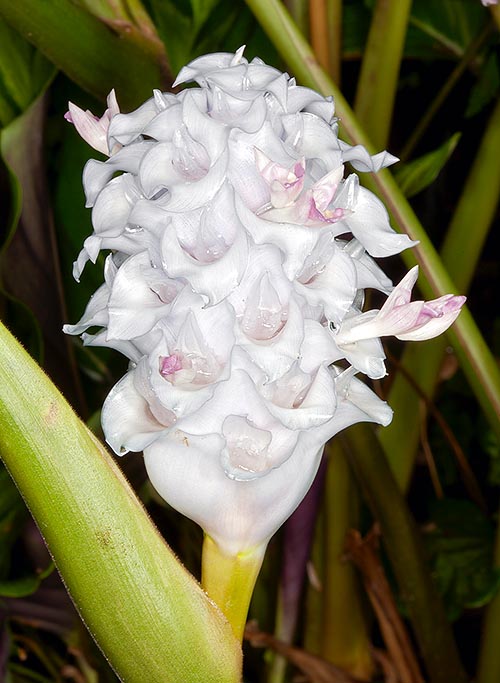 The species is native to Brazil (Bahia), where it grows in the humid forest.

The genus is honoured to the German botanist and paleontologist Johann Heinrich Robert Goeppert (1800-1884); the species is dedicated to the Brazilian landscape architect Roberto Burle Marx (1909-1994).

The Goeppertia burle-marxii (H.Kenn.) Borchs. & S.Suárez (2012) is a perennial evergreen rhizomatous herbaceous species, 0,5-1,2 m tall, with leaves, on a 30-50 cm long stem, from ovate to elliptic, up to about 70 cm long and 30 cm broad, of intense glossy green colour on the upper page, pale green below, with close and parallel lateral venations.

Inflorescences, on a peduncle shorter than the leaves, 13-18 cm long, formed by floral bracts with colour going from white to pale blue, persistent for a long time, which contain the flowers with tubular calyx having three white lilac lobes, which open daily in succession, short lasting. It reproduces by seed, but, usually and easily, by division.

Species of remarkable ornamental value due to the big intense green leaves and the torch-shaped inflorescences, cultivable in open air exclusively in the tropical and subtropical humid climate zones, preferably in partial shade or in shade, in order to emphasize the colour of the leaves, even if it stands some hours of direct sun light, excluding the central hours of the day; it requires a soil rich of organic substance, draining, kept constantly humid.

Elsewhere, it is cultivated in pot, in order to be sheltered in winter, utilizing an aerated organic substratum, with addition of coarse siliceous sand, perlite or other inerts, for getting a best drainage, with lowest winter temperatures not less than 16 °C. Waterings must be regular, but allowing the upper layer of the soil to slightly dry up before giving water again, thus avoiding stagnations which may easily cause rottenness; the humidity must be high, around the 50-60%, in presence of dry air it is necessary to frequently nebulize with non-calcareous water in order to avoid unaesthetic dots on the leaves. The cut inflorescences, long lasting, are utilized in the flower compositions.

→ To appreciate the biodiversity within the family MARANTACEAE and find other species, please click here.