The species is native to Belize, Colombia, Costa Rica, Ecuador, Guatemala, Honduras, Nicaragua and Panama where it mainly grows in the underwood of the humid forests and in a limited extent in the semi-deciduous ones, usually close to water streams, from the sea level up to about 600 m of altitude.

The genus is honoured to the German botanist and paleontologist Johann Heinrich Robert Goeppert (1800-1884); the specific name is the combination of the name of the genus Maranta and of the Latin substantive “folium” = leaf, with obvious reference.

The terminal inflorescences, subtended by a smaller caulien leaf on a 9-20 cm long peduncle, is a compact ovoid spike, 3-8 cm long and 2-5 cm of diameter, formed by 10-15 imbricate persistent bracts, spirally arranged, ovate with rounded apex, about 2 cm long and 3-4 cm broad, waxy externally, of greenish yellow colour. The bracts enclose coupled bisexual flowers, opening in succession, with 3 oblong-ovate sepals, about 2 cm long, persistent in fruit, and cream white tubular corolla, 2-3 cm long, with 3 unequal elliptical lobes 1-2 cm long. The flowers keep closed until when the opening is not forced by the bees, that are its natural pollinators. 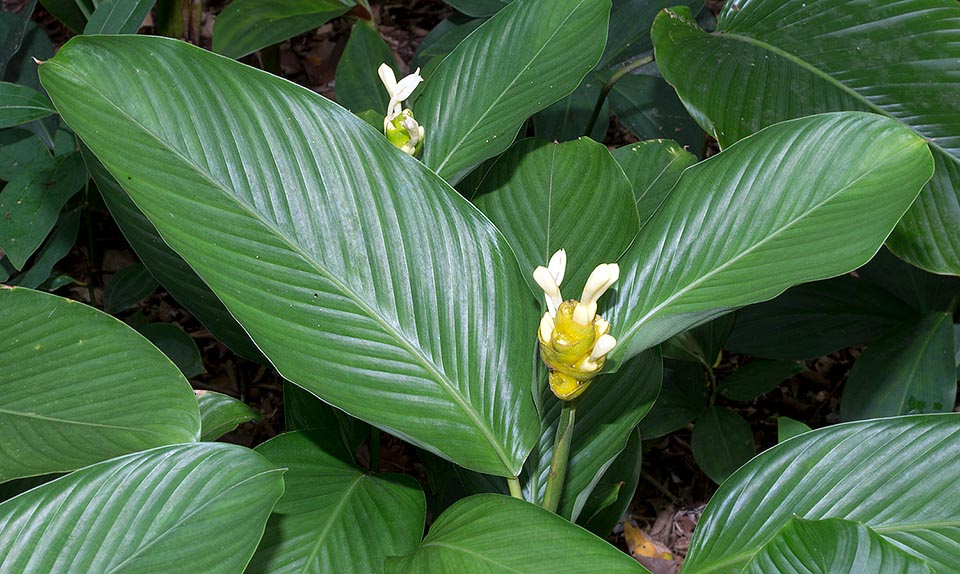 Native to Central America, Goeppertia marantifolia is an even 2 m tall rhizomatous. To open, flowers are helped by the bees who then fecundate them © Giuseppe Mazza

The fruits are obovoid capsules, 1-1,5 cm long, and of 0-8-1 cm of diameter, usually containing three trigonal seeds, of about 0,7 cm of length and 0,4 cm of diameter, blackish brown, equipped with an aril white at the base. Once the fructification is completed, at the base of the inflorescence usually forms a plantule initially without roots, that growing, with its weight, progressively bends the stem towards the soil to touch it. On the soil the new plant roots remaining for long time connected with the mother plant until when the connection does not break forming a new independent tuft.

It reproduces by seed, in draining organic loam maintained humid at the temperature of 24-26 °C, by division and through the plantules produced at the base of the inflorescence.

Relatively poorly known species outside from the origin zones, cultivable in the tropical and humid subtropical climate zones, in position from partially shaded to shaded, on soils rich of organic substance, slightly acidic to slightly alkaline, maintained constantly humid. Elsewhere, it may be cultivated in pot, in loam rich of humus with addition of sand or perlite per a 30%, to be sheltered in the winter months in luminous location with lowest temperatures not under the 15 °C and high ambient humidity. Regular waterings, but without stagnations, from spring to autumn, more reduced in winter to leave the substratum to partially dry up. Fertilizations, during the vegetative period, preferably with balanced products, with microelements, at ¼ of the dosage shown on the package.