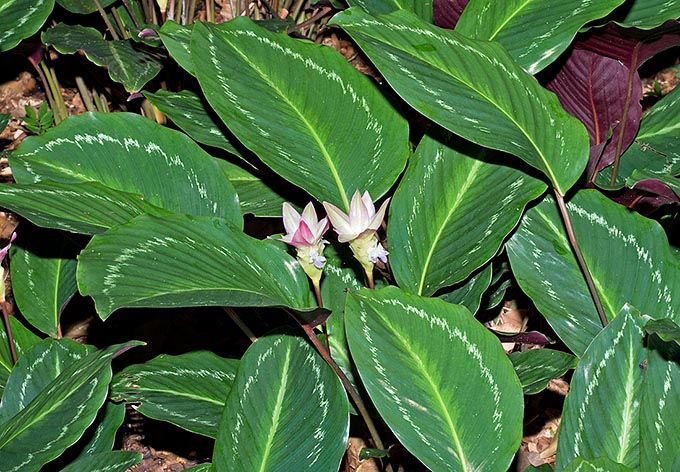 The species is native to Brazil (Acre, Amazonas, Amapá, Pará, Roraima, Rondônia e Tocantins) where it lives in the underwood of the humid forests.

The genus is honoured to the German botanist and paleontologist Johann Heinrich Robert Goeppert (1800-1884); the specific name is the Latin adjective “picturatus, a, um” = painted, with reference to the variegations present on the leaves.

The leaves, on a dark purple petiole, about 20 cm long, are simple, oblong-elliptic with pointed apex and entire margin, asymmetrical in respect to the central nervation, 18-25 cm long and 8-10 cm broad, above of glossy intense green colour with a grey-silver irregular stripe along the central nervation and two parallel lateral ones on the margins, below of violaceous purple colour. The inflorescences, on reddish peduncle, are compact spikes, about 10 cm long, formed by persistent imbricate bracts of greenish colour suffused of purple enclosing bisexual flowers with 3 white-greenish sepals and white tubular 3-lobed corolla. The fruits are pink capsules usually containing three seeds.

It reproduces by seed, in organic areated and draining loam maintained humid at the temperature of 24-26 °C, but usually and easily by division in late spring or early summer. Relatively less known species in respect to its horticultural varieties, amongst which the most famous is the ‘Argentea’ with silver grey leaves edged of dark green. 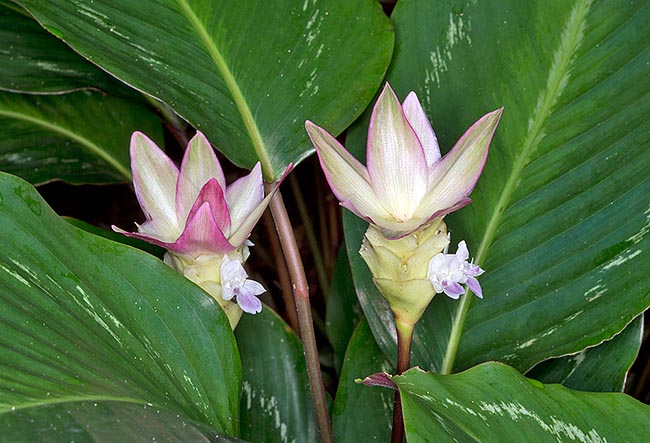 Utilizable, like its varieties, in parks and gardens exclusively in the tropical and humid subtropical climate zones, for edges or as soil cover in shaded zones, far from the direct sun that may cause damage to the foliage, on draining soils rich of organic substance slightly acidic to slightly alkaline, maintained constantly humid.

Frequently cultivated in pot, in organic loam with addition of siliceous sand or perlite per a 30%, to improve the drainage, for the decoration of luminous inner spaces, in a position far from currents of air, with high and constant temperatures and winter lowest ones not under the 18 °C.

Particularly important is the ambient humidity that must be high, 60-70%, to maintain healthy the foliage, not easy to get in a flat where usually is decidedly lower, it may be tried to increase it by placing the pot on a tray of a greater diameter partially filled up with rubble or other inert material maintained constantly humid, thus creating a more humid micro-habitat around the plant, and doing frequent nebulizations with non-calcareous water to avoid unsightly stains on the leaves. The waterings must be regular during the growth, avoiding dangerous stagnations, more spaced in winter, but without ever allowing the loam to dry up completely, utilizing ambient temperature water. The fertilizations must be done from spring to autumn, on a monthly basis, preferably using hydrosoluble balanced products, with microelements, at half the dosage suggested by the producer.